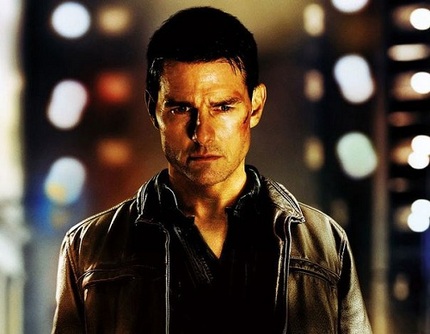 Tom Cruise takes on the role of the antihero Jack Reacher whole-heartedly in this film based on the popular series of the same name by Lee Child. The plot, taken from the first ninth * novel of the series, One Shot, begins with a seemingly random killing spree. In the aftermath, the shooter calls out for Reacher before slipping into unconsciousness. It is not long before Jack makes his way to Pittsburgh and joins forces with the shooter's criminal defense lawyer Helen (Rosamund Pike), daughter of the district attorney Alex Rodin (Richard Jenkins), and uncovers a far more complex plot than originally suspected. When a shadowy figure named Zec (Werner Herzog, yes you read that right) appears, Jack and Helen are plunged headfirst into peril.

Jack Reacher begins more like Dirty Harry than a modern action movie.  In the aforementioned killing spree, which is assured and unnerving, a deft and patient sniper picks off innocent-looking civilians in cold blood through the scope of his deadly weapon. As the scope zooms across a river bank abuzz with activity, the question lingers on who the target is going to be. There are a handful of scenes like this in Jack Reacher that grab your attention and enhance the film as a whole. Fortunately, these scenes are linked by well-paced character interactions and hefty dialogue, all of which are fueled by an outstanding mystery that Jack pieces together slowly but surely, one step ahead of everyone else.

Jack Reacher is probably best-described as an action mystery, but in truth it traverses many genres, and ultimately treads much familiar ground with a new pair of shoes. However, the tropes of  the action, mystery, crime, noir and thriller genres are simply asides that are circumvented by razor sharp writing that turns the conventions on their head.

There are also shades of old school law conspiracy procedurals a la John Grisham, and even nods to films which take on overarching socio-political issues such as Chinatown. And of course, there's the antihero with his own brand of justice. Yet somehow, Jack Reacher still feels fresh, in large part due to the contained but effortlessly brilliant use of Pittsburgh as the foreboding and barely just city on the edge of crumbling into chaos.

The characters in Jack Reacher are stand-out and memorable. Cruise himself ensures Jack never oversteps into caricature, and while you can feel the burden he is carrying with him, it is never addressed head-on. Meanwhile, Rosamund Pike adds some much needed flair to the tried-and-true procedural lawyer-type as Cruise's counter-part. Although she sometimes butts heads with the justice system, she still prefers this order and has a complex relationship with her father and his position as D.A. Herzog, who I still can't believe is in the film, is clearly not an actor. That said, his presence is widely felt, especially as he speaks matter-of-factly in that fantastic accent.

Blending action, mystery and comedy with many other elements, Jack Reacher is a strange film to define; at times it is a parody of the seriousness you expect, and some truly off-kilter moments turn the film into something else entirely. But Cruise handles McQuarrie's direction and script so well, it is not a stretch to say this character and duo will return, I welcome it and the new Hollywood mould it has created. If nothing else, it will be fascinating to gauge general audience's reactions to this change.

Jack Reacher is out in the US December 21 and in Australian cinemas on January 3rd.

* Corrected. Thanks to commenter Scott Murray.