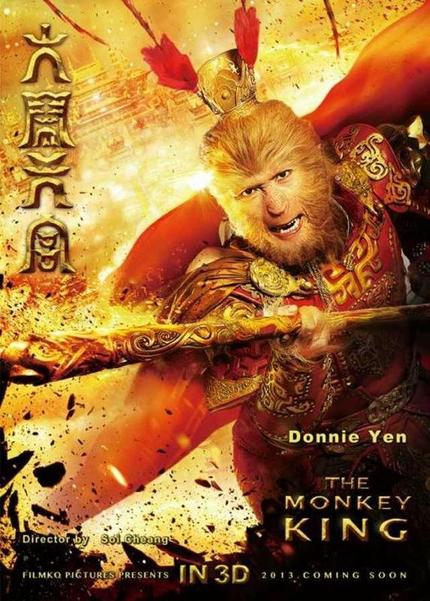 [UPDATE:  Speak of the devil...the first teaser has arrived today.  Mtime reports the film will contain over 2600 special effects shots with plenty of green-screen to create the mythical world and it will be released globally in IMAX 3D theaters. With Stephen Chow's Journey to the West already on its way as well, it seems 2013 is shaping up to be the year of the warrior monkey. You'll find the one-minute video embedded below.]

A poster for Soi Cheang's action fantasy film The Monkey King has been posted via Donnie Yen's facebook, featuring Yen in full prosthetic makeup that requires five hours to apply per day.

Ever since the beginning of time, it was the deities who had maintained the order of the heaven and earth. However, owing to their evil predisposition, the demons weren't content with being subservient to deities all the time. To take the controlling power from deities, the leader of the demon tribe, Buffalo Demon King mounted an attack against the deities in heaven, but he lost out to Jade Emperor of the deity tribe at last and was expelled to Flaming Mountain on earth. Though the battle was drawn to a close, heaven was left in ruins and rubble. For the sake of harmony among deities, demons and humans, the goddess Nuwa turned herself into multicoloured crystals with which she mended heaven. To protect heaven from demonic ambush again, she also built the South Heavenly Gate with the same crystals. The Gate was imbued with strong divine magical power so that any demonic being coming close to it would vanish into ash. Despite the utmost care she used, Nuwa dropped one of the crystals fell to the earth leaving an opening on the Gate. As the crystal fell, it gathered the solar and lunar energies throughout hundreds of thousands of years and it turned into a celestial foetus. A divine monkey was born at last and he was the pivotal figure related to the security and safety of the heavenly palace.

This divine monkey has exceptional innate talent and intelligence. He learns magic from the Old Master Puti, the magic tricks to ride on flying cloud, freeze people's action and transform himself into 72 different beings.

Meantime, a giant wall of water hit Flaming Mountain, where Buffalo Demon King lived. The Demon King knew it was time to pull off his plan to attack heaven by playing the divine monkey off against heaven, so that he could take the controlling power from deities purportedly.

The film is scheduled for release theatrically in late 2013.