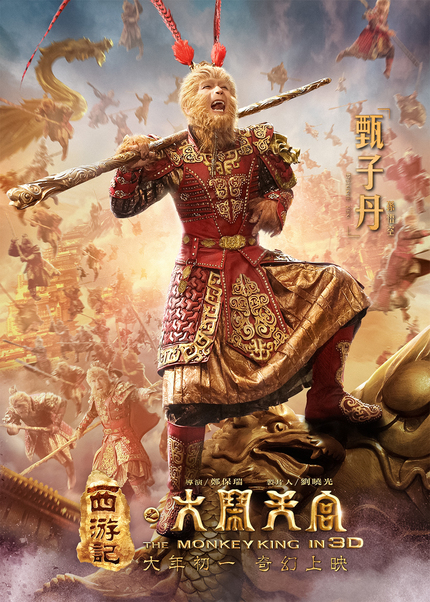 In Cheang Pou Soi's upcoming fantasy epic The Monkey King (aka in US as The Monkey King: The Legend Begins), lead actor/action director Donnie Yen not only underwent prosthetic makeup but he fully immerse himself into an ape-like character as the mythical folk hero, Sun Wukong.  The latest featurette via Yen's facebook provide an inside look on the process of his physical transformation as well as his performance to capture the behavior & movement of a primate.

Based on the first seven chapters of Wu Cheng'en's classical novel Journey to the West, this film version tells the origin story of the Monkey King and his path to redemption under a backdrop of a battle between heaven and hell. The cast include Chow Yun Fat as the Jade Emperor, Aaron Kwok as the Bull Demon King, Kelly Chen, Gigi Leung, Eilin Zhang, Joe Chen, Peter Ho, Xia Zi Tong and Carlson Cheng.

Do you feel this content is inappropriate or infringes upon your rights? Click here to report it, or see our DMCA policy.
Aaron KwokactionChow Yun FatDonnie Yenfantasymartial artsThe Monkey King