Watch The Final Trailer For THE MONKEY KING 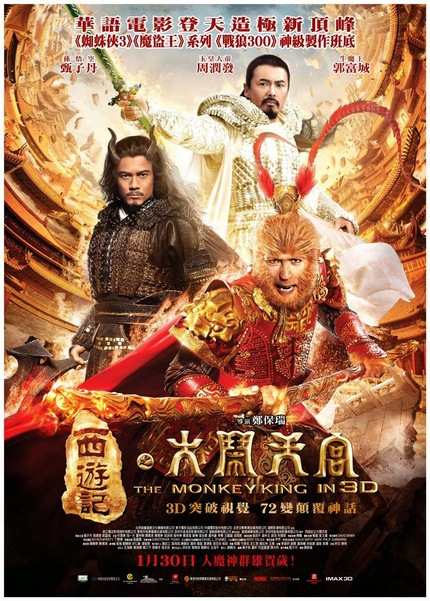 Yesterday saw the unveiling of the "Ultimate" trailer for Cheang Pou Soi's fantasy event film The Monkey King with action actor/director Donnie Yen as the title character caught in the middle of an epic battle between the Jade Emperor from Heaven, played by Chow Yun-Fat and the Buffalo Demon King from Hell, played by Aaron Kwok. There is definitely no shortage of grand scale spectacle, featuring a Chinese dragon, heavenly palaces floating in the sky and super-powered martial arts action sequences.

Ever since the beginning of time, it was the deities who had maintained the order of the heaven and earth. However, owing to their evil predisposition, the demons weren't content with being subservient to deities all the time. To take the controlling power from deities, the leader of the demon tribe, Buffalo Demon King mounted an attack against the deities in heaven, but he lost out to Jade Emperor of the deity tribe at last and was expelled to Flaming Mountain on earth. Though the battle was drawn to a close, heaven was left in ruins and rubble. For the sake of harmony among deities, demons and humans, the goddess Nuwa turned herself into multicoloured crystals with which she mended heaven. To protect heaven from demonic ambush again, she also built the South Heavenly Gate with the same crystals. The Gate was imbued with strong divine magical power so that any demonic being coming close to it would vanish into ash. Despite the utmost care she used, Nuwa dropped one of the crystals fell to the earth leaving an opening on the Gate. As the crystal fell, it gathered the solar and lunar energies throughout hundreds of thousands of years and it turned into a celestial foetus. A divine monkey was born at last and he was the pivotal figure related to the security and safety of the heavenly palace.

This divine monkey has exceptional innate talent and intelligence. He learns magic from the Old Master Puti, the magic tricks to ride on flying cloud, freeze people's action and transform himself into 72 different beings.

Meantime, a giant wall of water hit Flaming Mountain, where Buffalo Demon King lived. The Demon King knew it was time to pull off his plan to attack heaven by playing the divine monkey off against heaven, so that he could take the controlling power from deities purportedly.

The theatrical release date in both 2D & 3D formats in Hong Kong and China is on January 30th and 31st respectively, to coincide with the Chinese New Year celebrations. You'll find the final trailer (Cantonese dubbed with no English subtitles) embedded below.

Do you feel this content is inappropriate or infringes upon your rights? Click here to report it, or see our DMCA policy.
Aaron KwokactionChow Yun FatDonnie Yenfantasymartial artsThe Monkey King