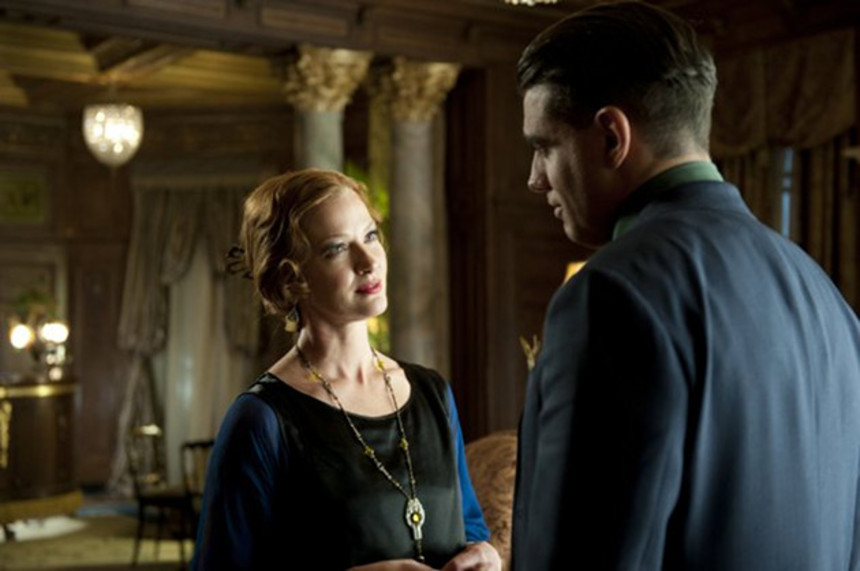 After taking last week off due to Fantastic Fest we return to our weekly look at HBO's Boardwalk Empire. Episode three of season three brings back the breasts with director Jeremy Podeswa promising to snap the show out of the domestic drama mode it has cruised in through the opening of this season.

Yep. Everybody's favorite tale of gangsters, guns, sex and violence has been considerably more sedate so far this year with the storylines so far dominated by family strife and the consequences of last season's actions. Episode one was dominated by Nucky Thompson's crumbling marriage. Episode two by Chalky White trying to push his daughter into a new life and the return of Eli Thompson to the fold. And episode three? It's all about Nucky feeling guilty and alone - not the most exciting content - while also pushing Gyp Rosetti into a violent rage and edging Nelson Van Alden closer to snapping, both of which should drive key storylines moving forward.

First, Nucky. Ol' Nuck's having bad dreams, dreams of a young boy shot in the face. And also his showgirl girlfriend isn't answering his calls. It's enough to drive a guy to distraction, a scenario exacerbated by his estranged wife Margaret forcing his appearance before the bishop to receive an award for his public philanthropy. Which, of course, was actually Margaret siphoning a massive amount of money out of Nucky's empire. What it all comes down to for Nucky is this: A frantic late night trip to New York to visit his lady friend in person like some desperate high school kid and an unintentional slight of Gyp Rosetti which will have huge consequences.

Rosetti? Yes, the unhinged Sicilian played by Bobby Cannavale is becoming an early favorite. Things appear to start well between Thompson and Rosetti, with the men coming to an early agreement that resolves Rosetti's blockade of the route between Atlantic City and New York but things turn bad, quickly, thanks to Thompson's imagined snub of Gillian Darmody - whom Rosetti has a moderate obsession with - a stiffed follow up meeting - thanks to the aforementioned meeting with the bishop - and a botched message from Thompson wishing Rosetti well. Now unsatisfied with his load of liquor, Rosetti not only takes his shipment but also puts the blockade back in place while also treating local law enforcement to a violent end.

What of our other favorites? Van Alden gets himself laid - the man did rather well with that nanny, no? - and pushed farther to the edge as an attempt to bond with his coworkers leads to him being busted and shaken down by federal agents. Van Alden's already a failure in his new life as a salesman and with his faith in right and wrong quickly eroding it is clearly just a matter of time before he puts his real skills to use on the other side of the law.

Meanwhile Lucky Luciano and Meyer Lansky are pushing their fledgling narcotics operation into broader territories in New York with violent consequences. That in itself seems likely to be little more than a side diversion to the main story but the reveal of Luciano as Gillian's backer in her new brothel will likely play out larger.

And then there's Harrow. Ah, reliable Half-Faced Harrow. When word trickles back to Harrow that Mickey Doyle is taking credit for his execution of Manny Horvitz, Harrow is less than pleased. Doyle's planned exploration of the kama sutra is interrupted by a gun to his head and Harrow outs both Doyle's big mouth and his own role in Horvitz's death to Nucky in person. What does this mean for Thompson and Harrow moving forward? Hard to say ... Harrow's whole issue was the execution of Angela Darmody, who he feels should have been left out of it, and he bears no grudge for the death of Jimmy. Will these two end up allies? Could be ...

Boardwalk Empire is in an odd place so far this year with the key players from last season either dead or rendered largely passive thus far. Three episodes in to the season the most active players have been Margaret Thompson and Richard Harrow, both of whom obey their own peculiar logic. But that looks likely to change in the very near future ...