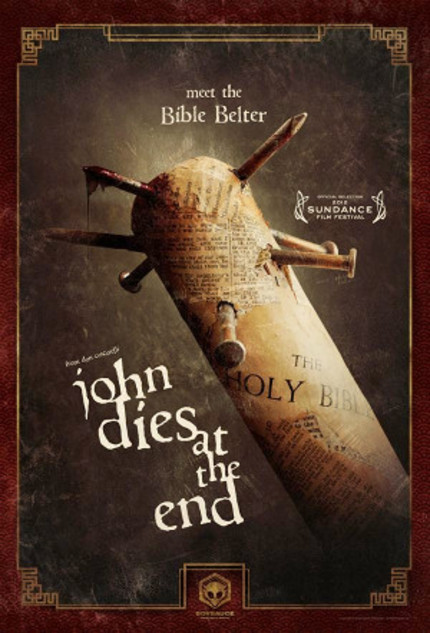 David Wong can see things that other people can't. Strange things. Frightening things. Sometimes dead things and creatures from other dimensions. So can his friend John, with whom he has set up something of a cottage business eliminating supernatural pests. It's because they're on drugs or, specifically, drug. A strange, seemingly sentient drug of indeterminate origin known simply as Soy Sauce, one consequence of whose use is to lead Dave and John to conclude - correctly - that the earth is on the cusp of an inter-dimensional invasion which may or may not be partially their fault but which is certainly their responsibility to stop.

Originally achieving notoriety as a serialized online novel by David Wong, a pseudonym of Cracked.com editor Jason Pargin, a cult phenomenon that has deservedly been described as a fusion of Douglas Adams and Stephen King, John Dies At The End - the written work - is a breezily ambitious, laugh out loud hilarious, action-horror-scifi-comedy fusion with more ideas per square inch than should be legally allowed. It has also, from the day it was first published, been considered by many to be unfilmable for the precise reasons that Adams' Hitchhikers Guide To The Galaxy posed so many difficulties: It's serialized nature is wildly sprawling and unkempt with the shambolic nature of the written word - which is more often than not death on the big screen - being a major part of the appeal. Well, difficulties be damned, Phantasm and Bubba Ho-Tep director Don Coscarelli has made Wong's book into a movie.

Presented at the Toronto International Film Festival in a cut ten minutes shorter than the version screened - and which we reviewed - in Sundance, with additional work done on the special effects, John Dies At The End starts very strongly, capturing the spirit and tone of the book spot on before ultimately succumbing to the problems many predicted.

We begin with David - the story being cheekily presented as an autobiography of actual events - waiting to meet a newspaper reporter (Paul Giamatti) in a dingy Chinese restaurant. David has a story to tell. His story. And it's a weird one. A story involving a levitating Jamaican, his best friend who was dead but then not dead, and the strange drug since ingested by both Dave and John, which seems to have granted the duo extraordinary powers despite having previously caused several others to spontaneously melt down to sludge. This is the Soy Sauce. It greatly accelerates the mind, radically sharpens perception and blurs the boundaries of space and time. It allows the duo to see strange creatures moving into this world from another dimension and launches them on an adventure that includes meat monsters, a one handed girl, a driving dog, and interdimensional travel.

The opening hour of Coscarelli's now ninety minute feature rolls along at a seemingly ferocious clip. The pace is fast, the set pieces clever, the action continually surprising and funny. Coscarelli neatly balances the tone of the film, shifting ably from laughs to fright to bemused outbursts of 'What the hell is that?' Things seem to be going very well indeed to this point, but those who have read the book will quickly become aware of a significant problem: Despite significant reductions to side plots and the almost total excision of supporting characters, two thirds of the run time of Coscarelli's movie is only enough to get him through the most basic setup of David Wong's book. Two thirds of the run time has allowed Coscarelli to do little more than introduce the key ideas, characters and concepts before he then needs to start wrapping things up without any real progression or exploration of any of those ideas and characters.

The impact of this will be felt most strongly by those who know and love the book, as key characters are shoved into the background. Dr Marconi (played by Clancy Brown) and Roger North (Doug Jones) are barely present and used only as a Deus Ex Machina device. Amy appears only long enough to give John and Dave passage to the alternate world, virtually invisible both before and after. Bark Lee gets a gag or two but nothing else. The mall sequence, largely gone. The other world, barely present. Korrok? One scene. Las Vegas, not here at all. That Coscarelli is able to explain the concepts and ideas of the story at all without resorting to massive scenes of exposition is a mark of skill but, still, the sheer volume of material that has been excised is staggering.

And while this will be most apparent to those who have read the book, the larger effects will be deeply felt by all regardless of whether they're consciously aware of what is missing. Characters are flat, ideas referenced but never explained or linked together. We're told what the Soy Sauce does but the film never gives more than the most surface explanations of how it connects to the larger alien invasion. Roger North is never explained at all. Korrok - the figure behind the alien invasion referenced right from the beginning of the film - does not appear until the final moments, at which point he is dispatched in seconds without any significant effort from our heroes. For that matter there is never any sense of danger from the supposed invasion at all. Never any sense that there is any sort of force or plan in place, no real risk either to our characters or the world. Even the signature weapon - introduced with a certain amount of aplomb and given its own poster - is never given any particular payoff.

Unlike the book, which does quite a good job of connecting its many outlandish and disparate threads, John Dies At The End the movie is all introduction followed by an abrupt end. The end is so abrupt, in fact, and littered with such remarkably low grade - and entirely out of step with the aesthetic of the rest of the film - digital effects that it is almost as though Coscarelli either ran out of money or simply threw his hands up at the steadily growing complexity and scale of the story and just gave up.

Many reports on the film from earlier screenings at Sundance and SXSW have pointed to the performances of the leads and the inconsistent effects as the major flaws of John Dies At The End. They are not. While not spectacular by any means, the acting is never worse than okay, and though the effects are dodgy in spots, they are not deal breakers. No, the problem with John Dies At The End is that the story is simply far, far larger than can be contained in the run time of the movie based on it. Ninety minutes isn't long enough to do Wong's story justice, not if you want to link up the threads in any sort of satisfying fashion and do justice to the characters involved. And so the movie ends up being little more than an initially pleasant diversion that fails to fully deliver on its early promise.