Opening: JOHN DIES AT THE END, A Fun Ride That Fails to Fully Deliver 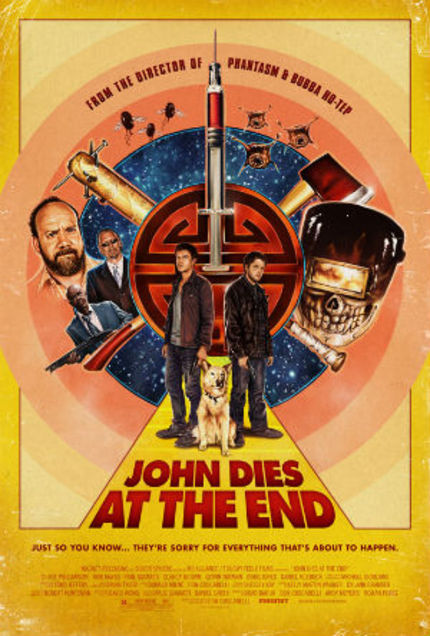 "So can his friend John, with whom he has set up something of a cottage business eliminating supernatural pests. It's because they're on drugs or, specifically, drug. A strange, seemingly sentient drug of indeterminate origin known simply as Soy Sauce, one consequence of whose use is to lead Dave and John to conclude - correctly - that the earth is on the cusp of an inter-dimensional invasion which may or may not be partially their fault but which is certainly their responsibility to stop."

Available via various VOD platforms now, and opening theatrically tomorrow in Los Angeles before rolling out across the U.S. in limited release, Don Coscarelli's adaptation of David Wong's popular novel debuted in rough-cut form at Sundance last year, where it elicited a positive response from our own Alex Koehne:


By knowing that we are being taken on a ride by a cast and crew that knows exactly what is going on, it's so much easier to let go and simply enjoy the madness without questioning the sanity behind it. If you decide to take that ride, I can assure you, it's a fun one!

In an interview that Alex conducted with the filmmaker, Coscarelli noted that the Sundance screening was the first time he'd seen the movie with a public audience, and he had a (perhaps predictable) response: "Of course, there are now things I want to go back and fix," he said. He also acknowledged about the source material: "It's a 350 page novel and we left out two thirds of it."

The film was acquired by Magnet Releasing for distribution in the U.S. and a finalized, shorter cut of the movie debuted at Toronto last fall, where Todd Brown saw it. (That's his plot description at the top of this article.) Todd pointed out the challenges inherent in Wong's novel, which began life as an online serial:


It's serialized nature is wildly sprawling and unkempt with the shambolic nature of the written word - which is more often than not death on the big screen - being a major part of the appeal.

The opening hour of Coscarelli's now ninety minute feature rolls along at a seemingly ferocious clip. The pace is fast, the set pieces clever, the action continually surprising and funny. Coscarelli neatly balances the tone of the film, shifting ably from laughs to fright to bemused outbursts of 'What the hell is that?' Things seem to be going very well indeed to this point, but those who have read the book will quickly become aware of a significant problem: Despite significant reductions to side plots and the almost total excision of supporting characters, two thirds of the run time of Coscarelli's movie is only enough to get him through the most basic setup of David Wong's book. Two thirds of the run time has allowed Coscarelli to do little more than introduce the key ideas, characters and concepts before he then needs to start wrapping things up without any real progression or exploration of any of those ideas and characters.

And while this will be most apparent to those who have read the book, the larger effects will be deeply felt by all regardless of whether they're consciously aware of what is missing. ... The problem with John Dies At The End is that the story is simply far, far larger than can be contained in the run time of the movie based on it. ... The movie ends up being little more than an initially pleasant diversion that fails to fully deliver on its early promise.

Fans of Wong's book and of Coscarelli's work will not be deterred from seeing the film for themselves -- the first hour still sounds fabulous -- but it may be best to lower expectations.