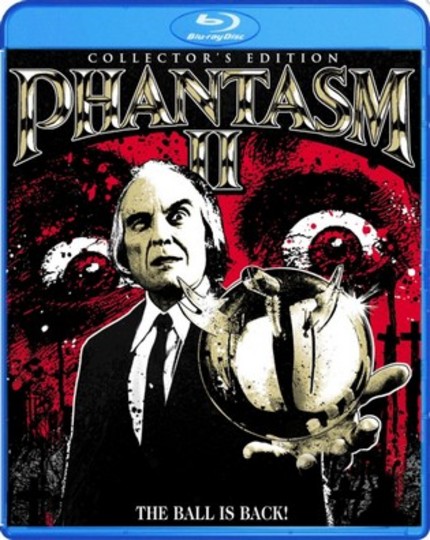 Don Coscarelli isn't a name that sends studio heads scrambling for their checkbooks, but if you're a fan of esoteric and bloody horror films, you know the guy's work.
Coscarelli's largest contribution to the world of horror cinema in undoubtedly the atypical slasher series, Phantasm, in which an interdimensional undertaker reaps souls for his collection of weird speechless trolls. However, he's also responsible for some of the craziest cult classics in recent memory, like his amazing adaptation of the Joe Lansdale classic, Bubba Ho-Tep, in which a retired and amnesiac Elvis Presley joins forces with black JFK against an undead Mummy foe. After ten years away from features, he's returned with a new mind-bender based on a hot, unfilmable literary property and it's now on Blu-ray and DVD, but first, let's take a look into his past.

Phantasm II
Scream Factory continues its impressive run with this special edition of Phantasm II. Here's what they have to say about the film:

The Tall Man is back with a vengeance in Phantasm II, the second chapter in the cult classic Phantasm series!

Released after seven years in a mental hospital, Mike convinces his old pal Reggie to join forces with him to hunt down and destroy The Tall Man once and for all. Mike's visions lead the two to a quiet little town where a horde of flying killer balls aim to slice and dice their gruesome way through everyone.

Exploding with special effects, unparalleled thrills, horror and suspense, Phantasm II climaxes with a blood-curdling conclusion that you have to see to believe.

What I have to say is that the film is incredibly fun and out there. Reggie Bannister remains one of the most unlikely action heroes every committed to celluloid, but the man sells it like crazy. This big budget follow up to Coscarelli's micro-budget original loses very little of the craziness and adds some very impressive effects work that really contributes positively to the overall product.

Scream Factory's Blu-ray is a thing of beauty. A lot of times these new HD transfers of '80s FX heavy films tend to show a lot of the seams, and while Phantasm is no exception, the film holds up very well under the circumstances. The audio and video of this release are quite impressive with no major defects to be found.

Where this release really excels is the quantity and quality of bonus material that Scream factory is quickly becoming known for. There is a ported over commentary track with Coscarelli, Scrimm, and Bannister that is definitely worth checking out for fans. There are also a few new featurettes from the folks at Red Shirt Productions highlighting the conception and production history of the film. In addition to that catch-all featurette, there are also vintage pieces on the FX work, deleted scenes, TV spots and trailers, and a rare short with Angus Scrimm playing Abe Lincoln. I love digging through these Scream Factory extras because they take great pride in presenting the best product and this is no exception. Definitely worth picking up. 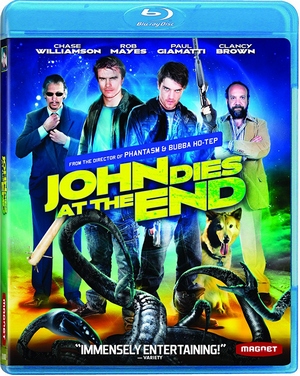 Far from the abstract slasher that is Phantasm is Coscarelli's latest film, John Dies at the End, an apocalyptic adventure story that is somewhere between From Beyond, Naked Lunch, and The X-Files. Our intrepid leader, Todd Brown was somewhat torn, though ultimately a bit disappointed by the film, as shown in this clip from his TIFF review:

While not spectacular by any means, the acting is never worse than okay, and though the effects are dodgy in spots, they are not deal breakers. No, the problem with John Dies At The End is that the story is simply far, far larger than can be contained in the run time of the movie based on it. Ninety minutes isn't long enough to do Wong's story justice, not if you want to link up the threads in any sort of satisfying fashion and do justice to the characters involved. And so the movie ends up being little more than an initially pleasant diversion that fails to fully deliver on its early promise.

I, on the other hand, wasn't bothered by any of this, not having attempted to connect the film to its source material at all. I found it's lo-fi trappings endearing, and it was clear to me that Coscarelli was going for an unearthly atmosphere in a very down to Earth way, if that makes any sense, which I'm sure it doesn't. I enjoyed every one of it's goofy minutes, and when it starts to go off the rails near the midway point, I was happy to jump the tracks with it. I'm a mark for gooey practical effects, and JDATE scores with me by have plenty of those, which more than made up for narrative nonsense in my book. To each his own.

Magnet Releasing really would have had to work hard to screw up this release. JDATE was shot digitally on an older RED ONE camera, and it's overly digital/processed look is very apparent from the moment the film opens, but once you accept that for what it is, the image is flawless and vibrant. The audio is also quite good, with the disc utilizing the surround speakers well during the frequent action sequences, and actually helps to build in some production value to an obviously low-budget project.

In terms of extras, Magnet has really stepped up their game over the last year with most releases bringing good quality features to the plate. In the case of JDATE, we get a commentary and a couple of featurettes, including a fantastic look at the practical effects from the film done by Robert Kurtzman's Creature Corps. Throw in some deleted scenes and an interview with Paul Giamatti and you've got a winner here. Definitely worth checking out for someone looking to get their brain blown out their ears.