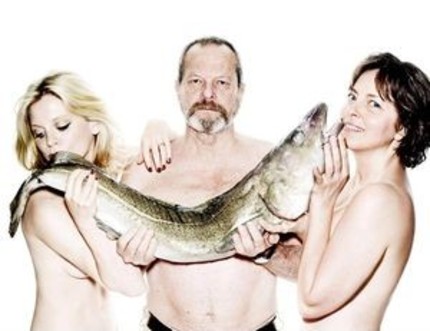 Other than fishing, nothing ever seems to come easy for Terry Gilliam. Despite the acclaim of directing landmark films such as Brazil and Twelve Monkeys, it is always a fight for Gilliam to put a film together - his visions considered to odd to be mainstream and yet too expensive to cater to anyone but the mainstream. His career reads like a cautionary tale in making large scale yet personal pictures and yet Gilliam keeps plugging away at it and sometimes things make it through.

And, in this case, it would appear that existential scifi picture The Zero Theorem has made it through.

Originally announced back in 2009 with Billy Bob Thornton attached to star, The Zero Theorem follows an eccentric computer programmer named Qohen Leth, living in an Orwellian future. Deadline describes it like this:

Living in an Orwellian corporate world where "mancams" serve as the eyes of a shadowy figure known only as Management, Leth (Waltz) works on a solution to the strange theorem while living as a virtual cloistered monk in his home--the shattered interior of a fire-damaged chapel. His isolation and work are interrupted now and then by surprise visits from Bainsley, a flamboyantly lusty love interest who tempts him with "tantric biotelemetric interfacing" (virtual sex) and Bob. Latter is the rebellious whiz-kid teenage son of Management who, with a combination of insult-comedy and an evolving true friendship, spurs on Qohen's efforts at solving the theorem. ... Bob creates a virtual reality "inner-space" suit that will carry Qohen on an inward voyage, a close encounter with the hidden dimensions and truth of his own soul, wherein lie the answers both he and Management are seeking. The suit and supporting computer technology will perform an inventory of Qohen's soul, either proving or disproving the Zero Theorem.

Well, Thornton is out and - as you can see in that synopsis - Christoph Waltz is in. The plan is for producers to launch international sales at the Toronto International Film Festival in September with production to begin in October. All of which means that we may very well have new Gilliam on screens in 2013.
Tweet Post Submit