Review: THE ZERO THEOREM, A Step Back Into The Future 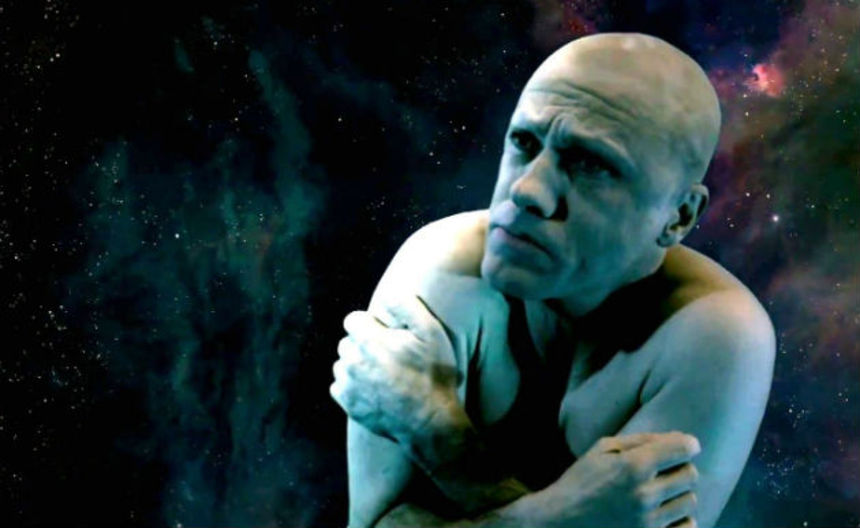 In Terry Gilliam's The Zero Theorem, the old master of visual overload and absurd humor heads back to his "Brazilian" roots. He tells the story of Qohen Leth, a schizophrenic futuristic data mathematician trying to find a solution for the Zero Theorem, which says that everything will add up to nothing.

It is easy to feel sympathy for Gilliam, who like so many times before, heavily struggled to make this picture and ended up doing it low-budget style. For fans of the director, the movie is a safe bet, as it depicts topics and images that made the director famous. Most of the time Leth sits in front of his computer trying to solve an insoluble puzzle and getting freaky visits by crazy people.

But he dystopian approach of a world connected through signs and wires is heading nowhere, and instead of using the lack of purposefulness to make a point about society, Gilliam just hides behind a romantic relationship. The very moment the movie starts to generate feelings, it feels fake. All craziness and detachedness are just surrogates for another nerdy-guy-gets-healed-by-a-mysterious-woman-love-story. To be fair, it is not as easy as that, but one can almost smell the need to please a bigger audience.

Yet Gilliam is too gifted a filmmaker to disappear in total irrelevance. The Zero Theorem marks even a step back to former strength although it does not quite get there. Compared to The Imaginarium of Doctor Parnassus, Tideland or The Brothers Grimm, the film has much more to offer on different levels. The quite common topic of virtual world versus reality gets some very original ideas added, like delusional phone calls, the manipulation of individuals by psychoanalysts, and hilarious suits to make your body disappear in the web. It is not only the border between reality and virtual world that blurs with The Zero Theorem, but also dreams, fears, and desires that come into an indistinguishable mix.

Moreover, Gilliam shows that he is one of the best when it comes to finding attributes one has never seen before in well-known actors. As he did in casting an anti-Bruce Willis in 12 Monkeys, he now surprises the audience with a Christoph Waltz who would not dare to enjoy a "Strudel". Not even in his earlier work for German television has Waltz been as neurotic and suffering from his own existence. Considering the performance of Tilda Swinton, the director goes even one step further because first she is almost unrecognizable and as soon as one may recognize the star Gilliam turns around the image one might have of her. The Kafkaesque interiors, the dreamlike cinematography and some funny ideas all make up for a decent Gilliam picture.

On the other hand, maybe a decent Gilliam picture is not a good movie anymore. His jokes feel predictable and he is heading nowhere without heading there on purpose. It lacks patience to develop structures, rhythm and characters. To use a phrase of the woman that turns Leth's head, the movie just looks but never touches.

Standing for itself The Zero Theorem would just be a nice little evening on the sofa, but considering the career of Gilliam and how the movie pays tribute to different ideas and images in the works of the director, it is just fair to show respect for the film. Perhaps in the end every film in the career of Gilliam will add up to nothing and this is what The Zero Theorem is ultimately about.

Review originally published during the Venice Film Festival in September 2013. The film opens in limited release in the U.S. on Friday, September 19. Visit the official site for more information.