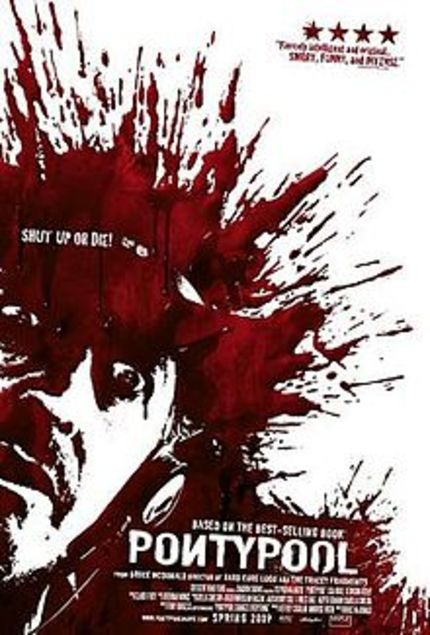 A dialogue about how to kill people- specifically actors. It seems like as good a place as any for this story. Pontypool Changes Everything by Tony Burgess is a great novel. It has seen the light of day as a very good film and radio play as well. Now due to the diligence of my friends at Chicago's esteemed Strawdog Theater and the generosity of Burgess himself, the story will be represented as a live theater piece. It was enough to make my head spin- even without the discussion of how to kill everybody I was privy to at the first read thru last week.

Pontypool the film had galvanized me. I showed it to everyone I knew, sometimes more than once. Here was a film that boldly tackled language as a trigger for diseased human relations. In an age where everyone spouts everything they feel like at everyone else and conversely tries to police language via boycott and demagoguery Pontypool the film was like a salve to awakened consciences even with it's darker than dark ending. SHUT UP! It seemed to say. Stop filling the air with imbalance, hatred and stupidity. And, most important, quiet thine own mind before you blow the circuits.

Pontypool the novel and the radio play was even more pointed in it's treatment of the theme. Each one of us owns what goes on in our own mind even when we leave the door open for thieves and garbage dumpers. What festers in there, what rattles around because the damn thing is alternately too empty, or full of it, is ultimately on us. It's fashionable (and even appropriate) these days) to shout down religious believers and would-be moralists who cross the line from love into low-life loudness but the main character of this film was a self-important shock jock who, however human he was, was also just as guilty as everyone else, perhaps more so, when it came to running off at the mouth. The antidote to all this wasn't the glibness our society seems to hold so dear but the peace that passes understanding and simply leaves us being rather than talking. Take a breath, the story seems to say.

Now the damn thing was going to be a play. We'd all have the chance to sit in the booth with the Mazzy himself and watch the world end. or would we? Director Anderson Lawler has been working with Burgess to shape the original piece for the stage and the glory of it is they have been just as fearless in their own unique stage treatment as the novel and the film each uniquely were.

The play opens in early October and yours truly will be doing one or two skyped conversations with Burgess and the live cast following the performances. What an opportunity. Then again maybe we'll all just sit there, afraid to speak, afraid to spoil the ilence or ignite some needless controversy. After all, Pontypool Changes Everything.