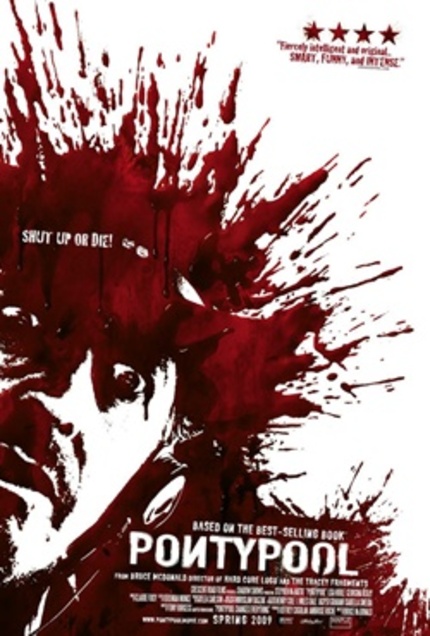 True story. For five years when I was fresh out of college I worked full time in a pair of homeless shelters here in Toronto. In that time I dealt with skinheads, crack dealers, street hookers and more. I had my life threatened by strung out junkies, broke up fights, witnessed gang beatings and mopped up blood after a pair of stabbings. But the most frightening thing I have ever witnessed with my own eyes occurred years earlier. It was at a big frosh week event at university. Pretty much hating all things frosh I was lurking about the outer edges of a large open quad packed full with hundreds more drunken, teenage students than it could reasonably asked to hold when someone at the far end of the quad - for reasons I'll never know - started waving his hands over his head and chanting out "Fuck you!" over and over again. From my vantage point I watched as the chant took hold and spread out from that one point, rolling out like a wave, sweeping up everybody in its path, washing away hundreds of individuals as those two simple words fused the lot of them into a single minded mob.

I would later study a bit of language theory - at one point I considered doing grad work on how language physically alters the brain - but nothing has ever wiped away my shock at the overwhelming power of plain, simple words when applied in the right context. This is the horror of Pontypool.

The latest from Canadian icon Bruce McDonald, Pontypool casts Stepen McHatty as Grant Mazzy, a big city shock radio DJ banished to the hinterlands of small town, rural Ontario talk radio after being fired. Mazzy's not happy about being there and he wears his displeasure on his sleeve, sliding into freewheeling, poetic rants on whatever the topic of the day may be, ignoring the admonishments of his producer all the while. Life for Mazzy now seems to be an endless series of faked helicopter traffic reports, school closing notices, and local obituaries. Nothing has eer happened here and nothing ever will.

But then they do. Driving in to work one cold, dark, snowy morning, a strange woman approaches Mazzy's car, slapping at his window and mumbling incoherently. Then, later in the day, reports begin to trickle in about a supposed hostage crisis, a crisis quickly followed by a full on riot at a local doctor's office, a riot that collapses the building and leaves several dead but about which the official authorities are bizarrely, completely silent. As the chaos spreads the one consistent element of the reports is that all of those affected seem to be mumbling to themselves, simply repeating gibberish over and over. Language, it seems, has become a virus.

The opening act of Pontypool is, without a doubt, the work of a master at play. McHattie is absolutely brilliant as Mazzy, a weary man who would have made a brilliant poet in another age, and McDonald makes full use of his star's skills. McDonald proves over and over again that tension is best produced in the mind, trapping us in the radio station along with his three principal characters - Mazzy, his producer and a young engineer - only trickling to us what information slowly trickles in to them, leaving us to muddle through what's happening along with them. By the time a quarantine is called and strange warning messages are being broadcast throughout the region in French Mazzy et al are beginning to piece together what is happening and the energy, for both characters and audience, positively crackles.

And here McDonald makes what - to me, though others at the screening I attended disagree - is the film's major mis-step, breaking the dynamic of the current group to introduce a new character when the doctor whose clinic was attacked implausibly arrives through an unlocked window at the radio station which, by this time, is besieged and surrounded. Ignoring how the doctor got through the crowd at all for now, his arrival unsettles the dynamic that has been established by this point and does so for seemingly no reason other than to provide copious, generally pointless, exposition explaining things we already know or should be able to work out on our own. I am generally of the opinion that if you resort to telling me something that you could have shown me then you have failed as a film maker and McDonald teeters dangerously along this edge for long stretches and never fully recovers his footing.

Pontypool ends up as a significantly flawed but nevertheless compelling and gripping piece of work built around a fascinating premise. Now if someone would just film an adaptation of Neal Stephenson's Snow Crash.