Review: NEIL YOUNG JOURNEYS Through His Past and Present 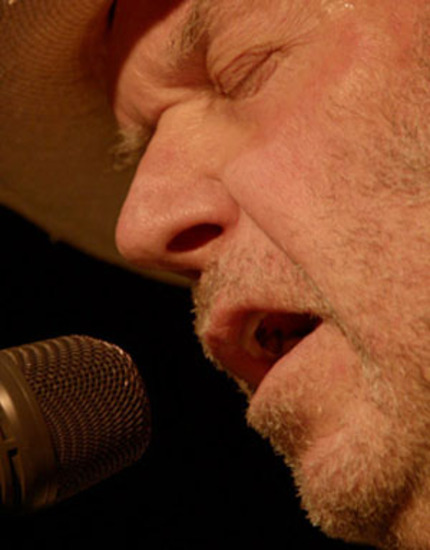 The third Jonathan Demme-helmed doc involving the mercurial Canadian Rock icon in as many years, Neil Young Journeys is perhaps the most slight in terms of actually "documentary" form.

We start the film with Neil and his brother beset in vintage large-bodied cars (Crown Vic and Cadillac, respectively), traipsing through their  hometown of Omemee, Ontario, languidly trolling the places where the Young boys spent their youth. They visit the school named after his (celebrated sports writer) father, and after a few minor detours and even fewer minutes, they've covered the entirety of the still small town.

Ostensibly, this is yet another "journey through the past" from Neil, but this time there's little left of interest to visit. By the time NY approaches an overgrown field in the outskirts of Pickering, a dreary suburb of Toronto that was once the location for the Young homestead, it all seems to be more than a bit silly. When our guide leaves this final location, he heads down Highway 7, takes a jaunt on to the 401, exiting at Yonge Street (one day it may yet be re-spelled to celebrate NY), finally pulling into the real home for Neil in this storied city: the inimitable Massey Hall.

For those unaware, Massey Hall is one of the finer venues for intimate musical performances in the world. From the famed concerts by Charlie Parker and Dizzy Gillespie, through to definitive acoustic shows by Neil onto present day events, it's one of the rare class of historic venues that is both acoustically and historically significant. Neil's own 1971 concert recordings are revelatory, as the singer takes to the stage with a bare acoustic guitar and a few songs recently penned, singing the likes of "Old Man" to an unsuspecting crowd. The near euphoria that erupted some 40 years ago for this local hero with the debut of these songs (many played weeks before the Harvest sessions that solidified further their canonization) is one of the finest moments in the history of live recordings.

Skipping ahead these decades, we find Neil touring in support of a new kind of solo project. With 2011's Le Noise recording, producer Daniel Lanois captured Neil's acoustic in a unique way. By splitting the signal from a single guitar using multiple mics and pickups, Lanois crafted a unique, rumbling, ragged sound that feels both epic and haunting. The entire show consists of Neil on stage, strumming away while the churn of this guitar tone provide both classic and contemporary songs with a wash of this grunge - the sound coming from the speakers has a fascinating combination of a throbbing bottom end, a slightly distorted midrange, and a clear high end that creates a kind of orchestra out of the single, monophonic instrument.

Le Noise is a laudable album, and these latest songs fit in well with some numbers that NY first performed at Massey some 40 years earlier. There's a grit to the guitar, but Neil's voice is still strong and shrill as ever, and he captivates his audience throughout the show.

Speaking of the Massey audience, we never see them on screen, never really have a pull back to situate his stage with the crowd that's watching him - the focus is entirely on the performance, and as a historical record of this show it's finely crafted.

The sound recording of the original performance is exemplary. At the premiere at TIFF 2011, the audience at the Princess of Wales theatre (mere blocks away from Massey) was treated to a modified sound setup. Using identical equipment to that used at the original gig itself, Demme suggested before the film began that this was the first true high resolution sound ever at a theatrical venue (not sure that playback of lossless 24/192 at home counts). NY has long been a detractor for poor digital sound, and his embracing of both MLP/DVD-Audio and with his Anthology set Blu-Ray audio he has finally found a digital system that for him equals/surpasses the analogue equivalent. Leave it to Neil, then, to have the pull in his hometown to bring a concert rig to a film premiere

The extra effort was more than worth it - I've rarely, if ever, heard such quality sound in a theatrical environment. The 96khz recordings was powerful and engaging, and the cracks and hums from the bank of small tube amps behind Neil could be clearly heard. Amusingly, the powerful bass was enough to ruffle my shirt collar several rows back from the screen.

As for the visuals, Demme can't resist being a bit cute with some of the shots, including use of an HD pencil camera mounted on the mic stand. When a drop of spittle occurs midway through a track we're granted a small moment of psychedelia, watching the inadvertent hork droplet reflect the lights in a shimmering fashion. Seeing a misframed, ultra closeup of NY's mouth is indeed an intimate way of seeing the performance, but it does get a bit precious after a while.

While Neil Young Journeys isn't really engaging as a standalone documentary, and its filming technique occasionally gets in the way of providing a clear record of the concert, it's still well worth a viewing for any fan of NY's music. Years now after the aneurism that almost took his life, his music remains as powerful and vital as it has been in decades, and the film does an admirable job of capturing this moment in his career.

Neil Young Journeys is now playing in limited release in the U.S. It opens in Canada on Friday, July 13.

An earlier version of this review originally appeared at Filmfest.ca