Pour Yourself A Drink And Catch Yourself A Sea Monster. First GRABBERS Trailer Arrives! 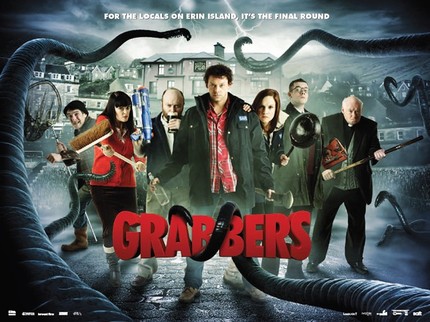 If you've been known to enjoy a pint from time to time and have a fondness for Tremors-style horror comedy then director Jon Wright may have just the thing for you. Wright made a splash in Sundance this year with his debut feature Grabbers, the tale of a remote Irish village trying to fend off invading sea creatures through the liberal consumption of alcohol.

Something sinister has come to the shores of Erin Island, unbeknownst to the quaint population of this sleepy fishing village resting somewhere off Ireland's coast. First, some fishermen go missing. Then there is the rash of whale carcasses suddenly washing up on the beach. When the murders start, it's up to two mismatched cops--an irresponsible alcoholic and his new partner, a by-the-book woman from the mainland--to protect the townsfolk from the giant, bloodsucking, tentacled aliens that prey upon them. Their only weapon, they discover, is booze. If they want to survive the creatures' onslaught, everyone will have to get very, very drunk!

With the Irish theatrical release coming in August the first trailer for the film has just arrived. Check it out below!

"If you've been known to enjoy a pint from time to time and have a fondness for Tremors-style horror comedy then director Jon Wright may have just the thing for you."

Two complete sold-out sessions of 2 x 640 people in a temple converted into a cinema for the film festival.

It's a great movie, good entertainment, with SUBTLE humour.

Director Jon Wright even made a few very funny comments via Skype during closing ceremony.

The film will be released directly on video back in France.