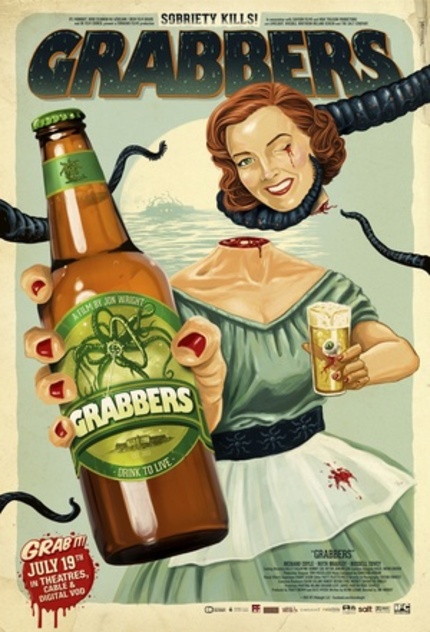 Irish creature feature Grabbers - in which the denizens of a small coastal town fight off invading monsters via mass drunkenness - hits US screens and VOD tomorrow and we had the chance to talk with writer Kevin Lehane about his very odd creation and how it came to be.

Where did the story of Grabbers begin for you? I've read that you wrote it as a spec script, where did the idea come from and when did Jon become involved?

It began as an attempt to write the kind of film I'd queue up to see on a Friday night, and an Irish film I hadn't seen before, really. The concept itself came about whilst I was backpacking and being savaged by mosquitoes. I kept hearing the same advice that I should eat lots of vitamin B and it sprung from that. The idea being that if you ate food high in vitamin B it made you poisonous for mosquitoes to eat blossomed into 'wouldn't it be funny if they were allergic to alcohol in your bloodstream' while I was having a few beers.

Jon became involved after I had written it. My agent took it out as a spec script and I got lucky in that a number of people wanted to take it on and in that initial round of meetings with producers and directors I met Jon. He said all the right things and as I like to tell him repeatedly it was me that hired him. I chose a pawn I felt would do my bidding, really. He won't read this, will he?

So, along with the commitment from the producers who said they wanted to make it, and not develop it -- music to any writer's ears -- I teamed up with Jon and Forward Films and within twelve months of that initial meeting, true to everyone's word, we were shooting the film in Northern Ireland. It was a fantastic experience as a writer.

When I saw the film I was struck by the tone it strikes and how it calls back to films such as Tremors or Gremlins - films that were meant to be scary but still fun and entertaining for a really broad audience. Was that intentional? What were the main influences for you?

Yeah, absolutely. What I like about those films you mention is that they take the world and the situations within them seriously. They're not lampooning the genre or delivering easy laughs while keeping themselves at an ironic distance. They're fun without resorting to spoof and they maintain a legitimate sense of peril for the characters throughout the film. I wanted Grabbers to have that same sense of innocence and sincere jeopardy that you find in a lot of those Amblin monster movies, like Arachnophobia and Jurassic Park, and combine that with some of the John Carpenter style menace of The Fog and The Thing. Of course, Tremors is the real spiritual godfather of Grabbers. Although I swear to god I didn't name the creatures Grabbers after Graboids. I've never seen the sequels to Tremors so I wasn't aware that Graboids had become their official moniker. Still, the world is big enough for Grabbers and Groboids, right?

Sticking on that tonal quality, it often seems that horror is fixated on going farther and being more shocking than what everyone else is doing, which is an approach that you clearly have stayed away from here. How do you feel as a creator and as an audience member about that constant urge to push things farther?

Well, Grabbers is a monster movie and I think there's a difference in that to a standard horror comedy. There's a sense of wonder with monster movies that's not necessary for most horror comedies. It gives you more leeway to find some joy in the story, I think. I guess most films these days are going for a shock and awe approach for the hype that can be generated but I think it's a fleeting emotional response. It all really depends on the story, I suppose. Grabbers needed a light touch to work. It needed to be fun.

You set yourself a difficult task by having your characters need to fight off the invasion through some very irresponsible behavior (I.e. the raging drunkenness) while still needing to keep them likeable for your audience. How difficult a balance was that for you to maintain?

Well, without sounding like a pretentious twat I wanted the story to be as much about the characters vanquishing their demons as it is about defeating the monsters. I wanted to externalize their character flaw and force them to adapt, or die. These two driving forces of the story feed off each other and mean there's more to it subtextually. I felt it was important that aside from the monsters being these nasty looking vaginasaurs that wanted to tear the heads off people, that the real battle was about two self-destructive souls fighting their demons. In the least intrusive way to the main plot as possible. I just like films to have heart and character is story, as they say.

This is quite simply the sort of film that doesn't get made in Ireland. Ever. Except you did. What on earth possessed you to think you could actually make it happen? Were there ideas you had to drop along the way either because of budget limits or to keep financiers etc happy?

Yeah. I didn't think it would get made, truth be told, but I really wanted to see it. So I wrote it as a 'wouldn't it be cool if' kind of project. It took ages to get folks to agree with me and I kept being advised to change it and set it elsewhere but I just really wanted to tell a cool story where the Irish saved the world. Otherwise what's the feckin' point in being an Irish screenwriter?

Anyway, yeah, we didn't have a lot of money to play with, and we didn't have enough time either. Those constraints really mean that you don't have time to recover when things go wrong, and they always go wrong on film shoots. We got hit with blizzards and gale force storms and had fishermen too drunk to supervise our sets. It was a challenge.

For that reason, the things we lost were the more time consuming visual gags and expensive set pieces. My favorite scene that we lost involved a huge set piece with Lisa drunk driving outside the pub and trying to rescue O'Shea right after the big one shows up and starts chasing them. She was reversing the wrong way, driving off without him, smashing into the creature and into trees, all while O'Shea was being attacked from all sides by the little ones. It was shame to lose it but we were really under the gun.

The dreaded question. Who knows? I've given up predicting what will or won't happen with the projects I have in development. I'm working with a cool director at the moment but I'm not allowed to talk about that project just yet. He's Oscar nominated, so, you know, reflected glory and all that... I have another script I'd kill to see as a film going out as a spec soon and a couple of other projects, TV and film, in development about the place. It took me two years to get anyone to even read Grabbers as script and then it happened faster than most films ever get made so I'm prepared for the long haul. I think.