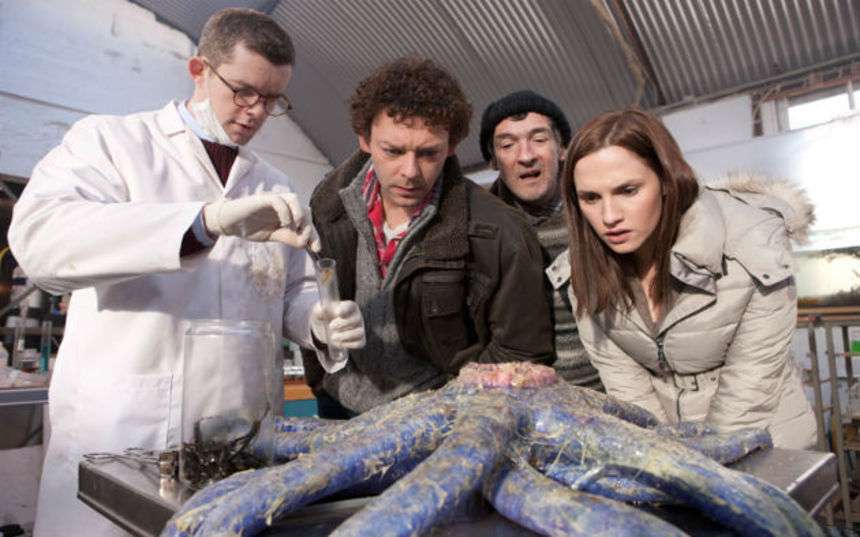 Something has gone badly wrong on picturesque Erin Island. The boatload of missing fisherman should have given that away. Or, if not that, then the entire pod of pilot whales that washed up on shore dead and with great gash marks down their side. But, sadly, nobody really paid attention to the obvious signs. Not until it was too late, anyway. It's not entirely their fault, really. A new woman arrived in this tiny, isolated hamlet and the local males were too busy jostling for her attention to pay much attention to anything else.

For the first half of its run time, Jon Wright's Grabbers scratches the horror-comedy sweet spot in a manner seldom seen since 1990's Tremors. Like that film, Grabbers draws its humor far less from slapstick gags than character interactions, closely observed quirks of behavior from a cast of characters just slightly larger than life. And, like Tremors, Grabbers manages to ratchet up the tension when desired while also remaining almost entirely bloodless, though that never distracts.

This is a film that plays its shocks for entertainment rather than revulsion and it does so remarkably well. For the first half of its run time, Grabbers is every 13-year-old geeky kid's perfect film, basically, and while it struggles to sustain itself through the back half of its run time, it still remains a thoroughly entertaining romp.

The positives are obvious from the very beginning. Director Jon Wright has a fabulous eye for composition, coupled with a fabulous sense of just how far to push a joke. He's helped greatly on that front by a sharp script from Kevin Lehane and sterling performances from the entire cast, with Richard Coyle, Russell Tovey and Lalor Roddy, as the town's perpetually drunk fisherman Paddy, standing out in particular. The creatures -- essentially a big ball of tentacles with a hungry, hungry mouth in the middle -- are pretty fantastic as well. 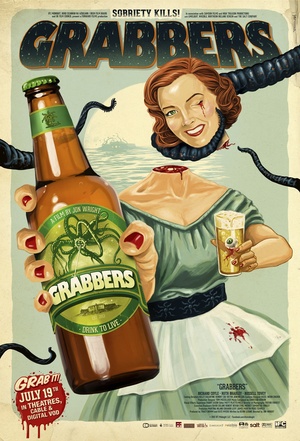 Where things stumble is a little more thorny. Essentially, this is a case of a central gag being funnier on paper than in execution. You see, the core joke here is that while the invading creatures would like nothing more than to feast on the blood of the locals, they find alcohol toxic. Thus, if you want to be safe, the solution is drunkenness. It's a fabulous concept on paper but ask yourself this: When was the last time you found a friend's funny and/or clever story about something they did while drunk or high actually funny and/or clever (especially if you weren't drunk and/or high)?

Drunkenness is one of those things that is consistently funnier in theory than in practice, and while Lehane and Wright play it better than many do, there is a definite sag in the climax of the picture. The writing-directing duo appear to be aware that promoting drunkenness as a good thing may not play well in certain quarters as well, and so they also insert a subplot about leading man Coyle being a functional alcoholic that plays not only as a supremely cursory and unsatisfying treatment of the topic, but also as a weirdly moralistic downer of a counterpoint to throw into a film about fighting monsters by getting pissed.

A few qualms aside, however, Grabbers stands as a good time throwback to the cult hit creature features of old. While it misses the opportunity to become a true classic itself -- a height the first half absolutely hits -- it still remains a solidly entertaining picture.

Review originally published during the Sundance Film Festival in January 2012. The film opens in limited theatrical release in the U.S. on Friday, July 19, and will also be available to watch via various Video On Demand platforms. Visit the official site for more information.