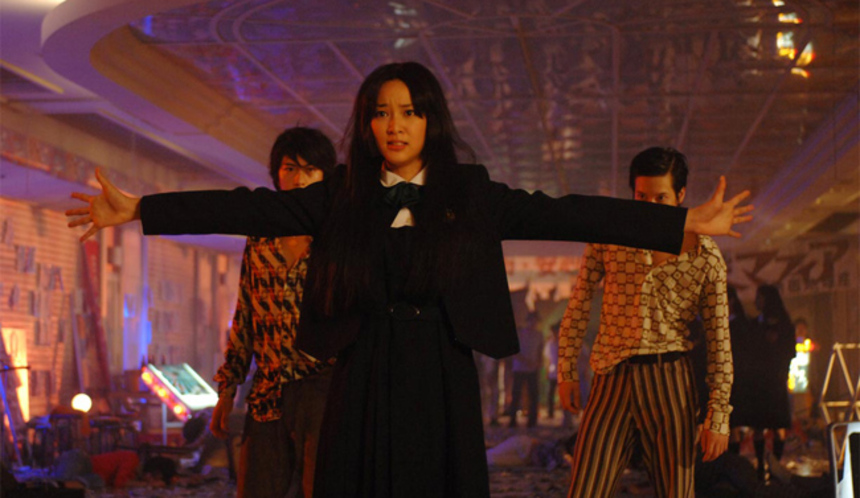 The latest razzle dazzle genre mash, For Love's Sake, from the maddeningly prolific Takashi Miike tackles the high melodrama of unrequited love with a gaggle of high school seniors as they collectively pave the road to hell with good intentions via breaking out into song and dance numbers.  Lest one, for even a second, think that Miike has hopped on the microtrend of gleeful high school musicals, the director cranks up the absurdity (and the deadpan) of the musical numbers:  dance fights (including Miike's over-the-shoulder take on the Oldboy corridor fight), J-horror gags, and lot wind and fire - all the while drenching everything with irony and bloody violence.   And because the film is based on an early '70s Manga (Ai to Makoto) the songs are crafted to resemble the J-Pop of the era.  The word Bourgeoisie is thrown around a fair bit.
Ai is queen of her little elite school, both because she is good at everything, but also because her father is filthy rich and is patron of the school.  Makoto is not just from the wrong side of the tracks, but rather a part of town where people beat the tar out of each other with the tracks.  They have a shared moment which is intimated in an animated prologue and sets the stage for Ai intervening to 'teach' Makoto how to stop being violent by pulling him out of youth prison and putting him in her Rushmore Academy.  This goes immediately and horribly awry, as Makoto wants nothing to do with Ai (the love being decidedly one sided) and is just fine with his violent, quite non-gender-specific ways.  Like Paul Verhoeven, it should be noted that Miike has no issue with men beating up women, and women giving back as good as they get.  Things are further exacerbated when another student, Four-Eyes, expresses his love for Ai in front of Makoto and the entire school but is rebuffed.  Ai will follow Makato wherever he goes, richer or poor, and get in the way of whatever the insular Makoto wants from life.  Add in two other girls, Gumko and Sad Chick, from the poor-public school in Makoto's demilitarized zone neighborhood who each have their own issues with the uber-rebel, and a flamboyant Yakuza boss when a penchant for foreshadowy morality tales, and you have the largest tragically unreturned flow of yearning since Rules of Attraction.  Everyone is in love, but nobody is happy, and people always seem to be getting punched in the face or stabbed.  The film dances over the line of heightened artificiality  - one sound-stage urban sunset shot is to die for - and debris-cluttered realism.  The ever gathering detritus in the set design increases with the characters worries and anxieties to the point of suffocation and (pleasantly) total visual distraction.
For Love's Sake doesn't deliver on all of its promises, however.  There are some alarmingly long breaks between songs, the films strength as the numbers are both catchy and memorable.  The extended hiatus that occurs in the third act underscore the films quite excessive 2-hour-plus runtime.  The film asks some heady questions, not the least of which, "What is happiness?"  but is content to wallow in its own camp and melodrama.  It is never boring.  Miike keeps things mercilessly high energy with shifting film-stock, back-story cutaways, children and school girls often in battle royale and other random bits of lunacy (a bandaged background extra with a swastika adorning her chin?  Why not!)  - but the excesses get in the way of the film ever coming to a point or catharsis.  Still, it is the furtherest things possible from bourgeoisie.  Take that Glee.
Tweet Post Submit