Now On Blu-ray From Third Window: VULGARIA & FOR LOVE'S SAKE 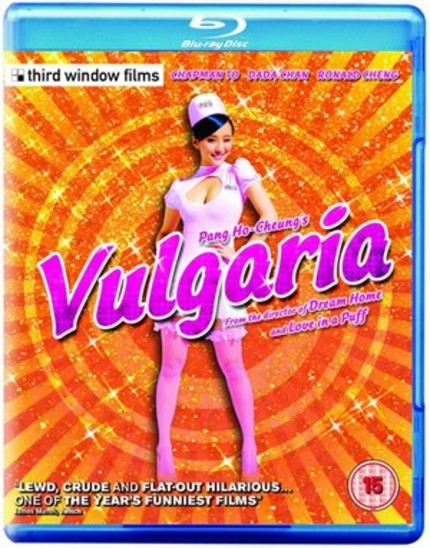 Third Window Films continues to impress with their latest pair of Blu-ray releases, Pang Ho-Cheung's Vulgaria and Miike Takashi's For Love's Sake. The films could not be more different from one another, but both are amazing in their own ways. Pang's Vulgaria is the latest left-field entry into a filmography that is as varied as any working filmmaker today. Very few filmmakers cam move so easily from black comedy (Men Suddenly in Black) to straight horror (Dream Home) to romantic comedy (Love in a Puff) as easily and Pang, and perhaps his main rival in this department is the director of the other half of this double feature. Miike Takashi is something of a modern legend; supernaturally prolific and working in every genre with equal ease, his latest film on Blu-ray, For Love's Sake, expands his resume even further while harkening back to a time before his name was hot on the lips of international film fans.

Vulgaria
If you're one of those people who follows the Hong Kong entertainment rags/blogs these days, Vulgaria is quite a treat. Pang Ho-Cheung's take on the down and dirty methods of the movie biz in Hong Kong is chock full of one hilarious vignette after another, and each one dirtier than the last. Vulgaria is something like a Hong Kong adaptation of Kenneth Anger's seminal rag, Hollywood Babylon. The road to the screen is fraught with danger for producer Chapman To, no taboo is spared, and no sacred cows left unviolated. Our own James Marsh had this to say:

Vulgaria doesn't boast much in the way of plot or rigid structure, but its pace, energy and brisk running time combine with a cameo-packed cast list for an exceptionally guilty pleasure that is a uniquely Hong Kong-grown cinematic experience, but one which serves to highlight precisely what its citizens laugh about, obsess over and gossip about incessantly, whether at work, at home or in bed. Hardly the high-brow social commentary Pang has touched on in the past, nor much of an advancement of his technical cinematic skills, Vulgaria is nevertheless flat-out hilarious. After all, what's not to love about the prospect of a grown man fucking a farm animal?

That about sums it up. If you aren't familiar with the seediness of Hong Kong's film industry a few of the jokes might fall flat, but there is so much broad comedy done well in Vulgaria, that I can't imagine anyone walking away without a few decent belly laughs, familiarity be damned.

Third Window's Blu-ray is typically impeccable, they are one of the most reliable distributors out there when it comes to A/V on their Blu-ray releases. Looks great, sounds great, what more do you want? TWF have also ported over and subtitled some bonus material that amounts to about 20 minutes of conversation about the film and the making of the film with star Chapman To and director Pang, this is all very well done and amusing. Not terribly probing, but for those unfamiliar with the industry, Pang and To help to put a few of the film's aims in context. Another stellar release from Third Window. 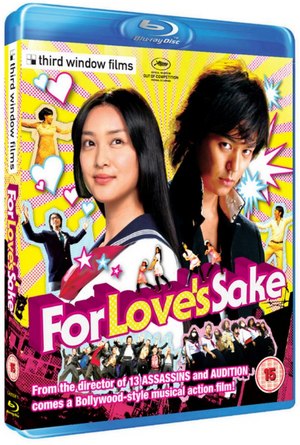 For Love's Sake
Another film yet to find a distributor among the more conservative American market is Miike Takashi's romantic gang fighting musical, For Love's Sake. Many people have marked this as a stylistic departure for Miike, but that really isn't the case. The 2+ hour film does, however, provide a point of convergence for many styles and themes with which Miike has experimented over the last 25 years and manages to meld them amazingly well. From the musical agility of Happiness of the Katakuris, to the high school melodrama of the Young Thugs films, to the candy colored excess of something like Yatterman, to the frenetic visual style of his earlier works like Dead or Alive, For Love's Sake is a synergistic explosion of excitement that could only have come from a singular talent like Miike Takashi.

We have a couple of reviews in the archive for this film, both of which mention a strangely song-free second half, and the extended run time as possible issues, but even Kurt Halfyard and James Marsh make those into more than miniscule issues. Here's a piece of Kurt's review from Fantasia:

The film asks some heady questions, not the least of which, "What is happiness?" but is content to wallow in its own camp and melodrama. It is never boring. Miike keeps things mercilessly high energy with shifting film-stock, back-story cutaways, children and school girls often in battle royale and other random bits of lunacy (a bandaged background extra with a swastika adorning her chin? Why not!)  - but the excesses get in the way of the film ever coming to a point or catharsis. Still, it is the furthest thing possible from bourgeoisie. Take that Glee.

The musical numbers are incredibly catchy, and despite not knowing a single word of Japanese, I frequently caught myself humming or whistling their toe-tapping tunes days after watching the film. The overall design is a dazzling assault on the senses and the performances ensure that even characters who are supposed to be villains end up being incredibly likeable - and often get the best songs! I can say with some certainty that you won't see a more wild, inventive or shamelessly enjoyable Japanese film this year. Warts and all, I absolutely loved it.

Seems unanimous. This is a return to the gonzo Miike with which I fell in love after seeing films like Deadly Outlaw Rekka, Katakuris, Fudoh, and so many others. It may not be perfect, but I was too busy enjoying myself to bother nitpicking. Definitely one to see.

Again, Third Window knocks the A/V out of the park with this film, a significantly more challenging job than Vulgaria. The image quality is exceptional, even though Miike was more visually daring in this film that many recent ones using different film stocks and crazy lighting schemes, this Blu-ray handles them all equally well. The audio is also excellent, an important aspect for a film that uses so much music. The extras include a solid making of and a music only version of the film which is thirty minutes of solid music, just in case you're in the mood.

Both of these films are must-buy releases for those of you in the Region B part of the world as well as those of us who've made the jump to being region free. I cannot recommend them highly enough!