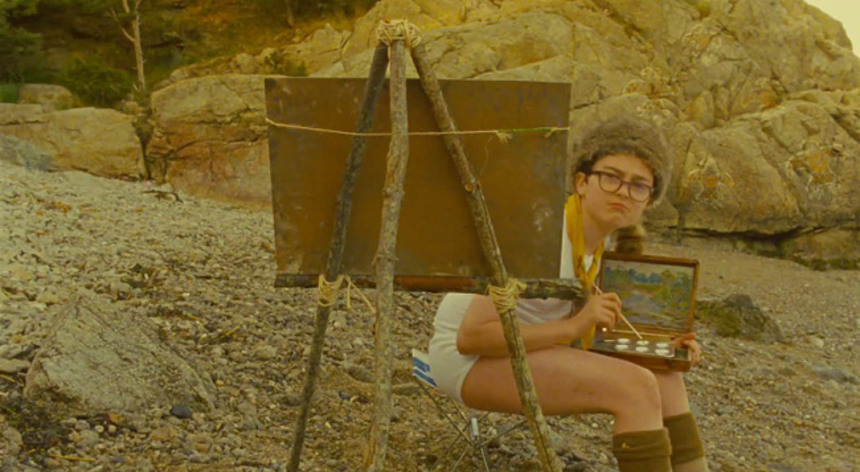 Perhaps the chief delight of Wes Anderson's Moonrise Kingdom is that it is the most quintessential Wes Anderson movie to date. That is not to say it is his best film, or his most insightful film, or even his most imaginative film but it feels as if the quirky auteur (both in style and grace) has come as close to the Platonic ideal of what his cinema is. It makes the film a pretty good entry point for the uninitiated, while simultaneously pandering to the faithful and likely further alienating those who do not like his brand of moviemaking. My overall experience added up to the most fun and pure aesthetic pleasure upon first experiencing any one of his films; and I like them all plenty good. Upon a week's worth of post viewing reflection, there is some apprehension on the possibility of this being the most shallow, character-wise and story-wise, of all of his films, but time and further viewings will tell that tale.

The year is 1965 and the setting is an idyllic New England island with few residents and no paved roads. Bob Balaban, channelling Bud Cort, lays out the geography of the island and warns of an impending storm. In the meantime, troubled twelve year-olds Sam and Suzy (a parenting manual shown at one point indicates, as deadpan a visual cue as any, "How To Cope with your VERY Troubled Child.") run off into the woods, him fleeing his Khaki Scout troop and her a dysfunctional family. This leaves the lovers on the run in the deep woods, infected with a highly mannered case of l'amour fou leavened with meticulous camping skills, while the local police (Bruce Willis), the girl's parents (Bill Murray and Frances McDormand), children services (Tilda Swinton), a gaggle of scouts (including Edward Norton and Harvey Keitel) and maybe even the narrator all are in pursuit in one form or another to get things put into order before the hullabaloo starts (either the storm or the big Khaki Scouts fireworks show.) If you are going to have a big finale to your movie, you might as well explicitly label it the hullabaloo!

But the plot of the film, as simple as it is, is less important than the down-time in between. This lets Anderson move his camera across many minutely detailed tableaux, a meticulous diorama approach to reveal character and emotion by 2D-side-scrolling which started to be very explicit with The Royal Tenenbaums (the opening shots in particular), made a perfect kind of sense in stop-motion effort Fantastic Mr. Fox, went to hilarious extremes in some for hire commercial advertisements and here achieves a sublime virtuosity to the point where things swivel 3D-like into the frame and starts scrolling in another side-direction. It also allows for the Andersonian conceit of letting the children play at grown-up while the grown-ups engage in childish behaviour. Young Jared Gilman is convincing as Sam, the multi-talented, but parentless, boy who wants to set aside childish things and begin a life with his true love Suzy. Kara Hayward has the lolita-seriousness down and can seriously rock heavy-blue eyeshadow even if her performance and character feel like left-over traits from Margot Tenenbaum. Girls, outside of Angelica Huston performances have not been his strong suit as his wont is to slightly feminize (ok accessorize) the men. This is never more obvious than the 'high-amount-of-flair' in Edward Norton's super-scout. It is wonderful to see Norton dive headlong into character as a man who gets his living as a math teacher, but sees his profession as Khaki-Scout first and foremost. That he unwittingly competes as a father figure for Sam with Bruce Willis' sad-sack cop (his cop car is a converted hearse!) and has his own Odyssey-like journey from disgraced leader to some kind of hero is noble in its silliness. Even more of an accomplishment is the complete emasculation of one Harvey Keitel who shows up briefly as the anti-Mr. Wolf revealing all but a thin sheeps-clothing of manliness. All these Coen Brother's regulars popping up hither and yon starts to get rather weird, so it is comforting to see Jason Schwartzman show up to fete the young lovers as a rock-star scout chaplain.  Hullabaloo indeed.

Any film peppered so heavily with Benjamin Britton concert-pieces and Hank Williams songs should feel disjointed and at odds in tone. Yet, as always, the musical side of the film comes together as brilliantly as all the other design elements. Stay for the closing credits, not only because of the lovely scrolling typeset, but because Alexandre Desplat's canonical score is explained in detail to show how a layered and beautiful piece of music is assembled from all the individual pieces. As apt a description of Anderson's idiom as anything else, and it allows you to linger in the Moonrise Kingdom for a few more delightful minutes.