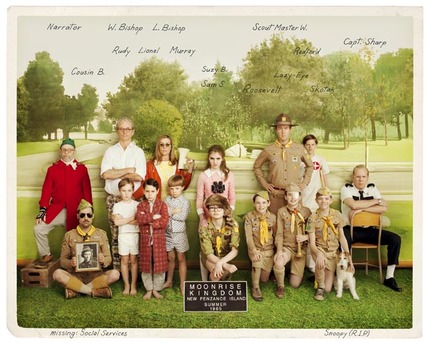 Chances are good that if you're an indie film fan in one of America's major metropolises, you've already had a chance to see Wes Anderson's summer indie-blockbuster MOONRISE KINGDOM (did you catch this Anderson news yesterday as well?). With seven weeks of release, the whimsical teen charmer has expanded as wide as 884 screens domestically and has yet to dip below the $5000 weekend per-screen mark. This impressive feat has seen the film total over $27M domestically (plus another $11M internationally), making it Anderson's second most successful box office picture ever (The Royal Tenenbaums totaled just over $52M, crossing the $50M barrier week 12).

Just in case you haven't had a chance to catch the film yet (or if you just want a pleasant reminder of Anderson's quirky comedy), Focus Features has released three new clips from the film to try to drum up a bit more support as we head into the summer's warmest weeks. Check them out below and let us know your favorite moments from the film (or if you thought it was a stinker).