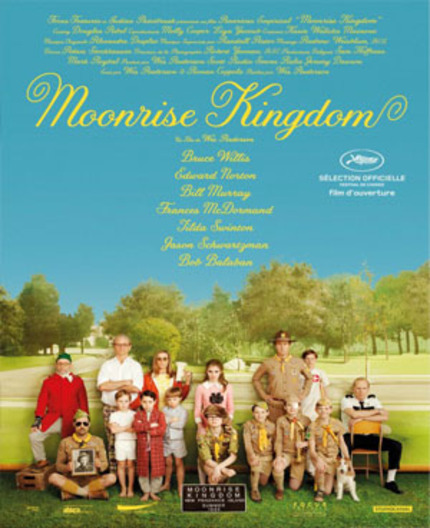 Wes Anderson doesn't do formula. Love, hate, or ignore his movies, there's little denying that the man has a decidedly unique visual approach to cinematic storytelling, one that amuses many and leaves others cold.

Personally, I have yet to see a Wes Anderson movie that I don't consider funny, insightful, and novel. And with the arrival of his most recent effort, the simply adorable Moonrise Kingdom, I've seen every one of Wes Anderson's films. The man is a remarkably consistent filmmaker, and he seems to bring out the best in whoever he hires, be it a movie star like Bruce Willis or an anonymous set designer who actually cares that their carpets, staircases, and off-kilter color schemes look perfect. Wes Anderson's films may be weird little beasts, but each one has a simple approach to "quality control" that allows the viewer to feel somewhat smart, partially "in" on the joke, and an important part of the storytelling process.

Clearly I'm a huge fan of films like The Royal Tenenbaums, The Life Aquatic with Steve Zissou, and Fantastic Mr. Fox, and while it'd be tough to call any movie "Wes Anderson's finest," Moonrise Kingdom certainly ranks among his most emotionally satisfying. It's little more than a sweet and sincere tale of pre-teen romance that occurs on a tiny New England island, way back in 1965 -- and if that premise sounds sort of dull to you, I'm here to remind you that this is a Wes Anderson film. He's not really good at boring. Plus, and this is always one of the best parts, Mr. Anderson has surrounded himself with superlative performers (some even movie stars), all of whom happily take a back seat to the filmmaker's words, themes, and admirably askew visual presentation.

The core of the movie is about a sensitive boy and a grumpy girl who plan to meet for a private adventure; he escapes from his scout camp, she temporarily runs away from home, and while this sweet, odd, and adorable romance takes center stage, Anderson (as usual) populates the periphery with all sorts of colorful oddballs. The young leads (Kara Hayward and Jared Gilman, truly flawless) deliver a great little movie all by themselves, but when various concerned grown-ups pop up (including Bruce Willis, Bill Murray, Edward Norton, Tilda Swinton, Bob Balaban, and the wonderful Frances McDormand), that's when Moonrise Kingdom goes from a poignant, honest, youthful romance to a low-key farce of quietly hilarious proportions.

As always, Anderson finds legitimate warmth, humanity, and humor in weird characters, absurd situations, and weirdly stylized banter. Without the filmmaker's palpable sense of earnest nostalgia, films like Moonrise Kingdom would feel more like a cold curiosity than a film you want to toss your arms around for a big hug. To say that Wes Anderson (and his loyal team of collaborators) have evolved on the "human" side of the equation would be a serious understatement. One can almost feel the filmmaker getting more personal, comfortable, and confident with each new movie, and it's an absolute treat to watch it all happen.

Moonrise Kingdom is now playing in the U.S. Check local listings for theaters and showtimes.