Wanna See SXSW Fave THE FP Play At Your Local Theater? Then Listen Up! 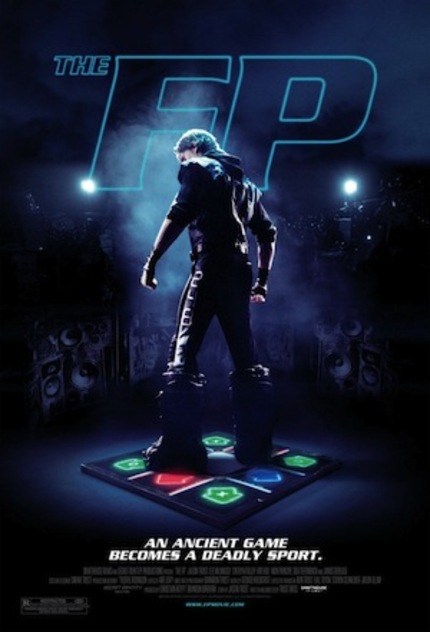 It's no secret around these parts that our love for Jason and Brandon Trost's Dystopia-set Dance Epic The FP runs pretty deep. After all, a cult hit in the making is our primo kind of bag. Drafthouse Films -- the newly minted distributor formed by Tim League of the Alamo Drafthouse Cinema down in dear ol' Austin, Texas -- was also quite taken with the film and snatched it up for U.S. release after it played SXSW last year.

Now a lot of readers might assume a theatrical release for The FP would just mean a limited platform roll out, the top 15 markets or so, followed by VOD and DVD/Blu, but we're here to tell you: No! wait... not true! For tonight, Drafthouse Films and Tugg Inc. have some very sweet news to deliver. Read on, and when done, don't forget to do your part!

DRAFTHOUSE FILMS ANNOUNCES "THE FP" IS AVAILABLE TO SCREEN NATIONWIDE THROUGH TUGG, INC.

AUSTIN, TX - March 9, 2011
- At the 2012 SXSW Film Festival today, Drafthouse Films announced THE
FP is available to screen in cities nationwide through Tugg, Inc.
("Tugg"), a collective action web platform that enables moviegoers to
choose the films that play in their local theaters.  Starting today,
fans can sign up to bring THE FP (http://tugg.com/thefp)
to their theater to share this manic, warped, ambitious, hilarious and
utterly original vision of a dystopian world where turf battles are
settled by the competitive dance video game "Beat Beat Revelation."  THE
FP will be available through Tugg in conjunction with its theatrical
release in select cities Friday, March 16.

THE
FP took SXSW 2011 by storm with its World Premiere at SXFantastic,
programmed by Fantastic Fest.  A ferocious nod to big-budget studio
action fare and underdog sports dramas of the 1980s, THE FP is a loving
homage to everything from ROCKY IV to THE WARRIORS and has been called
"loud, furious & recklessly funny" (Indiewire) and "vulgar,
hilarious and kind of amazing... THE FP is a certifiably insane
experience" (Movies.com).

"Tugg
provides a platform for sharing THE FP in a way that we always imagined
it should be experienced - with a group of friends and fellow film fans
that got together to see it in the theater because one of them heard
about this batsh*t insane film about deadly competitive dance video
games that is fashioned after the 80s films we love.  We're thrilled
that audiences everywhere, including the Frazier Parks of the world,
will have the chance to bring this film to their theater by demand,"
said Jason Trost, Co-Director/Writer/Star.

"THE
FP is a film that was made to be experienced communally with a big
group howling together at the unhinged fun this film offers. We couldn't
be more excited to give fans a chance to craft that kind of experience
at the theater through Tugg's innovative platform," said Drafthouse
Films CEO Tim League.

To learn how to bring THE FP to your theater visit:

For a current list of opening dates & showtimes for THE FP visit:

For more on How Tugg Works visit:

In
a dystopian future, a relentless turf war rages. Two rival gangs feud
for control of rural wasteland Frazier Park ('The FP') in the deadly
arena of competitive dance-fight video game "Beat-Beat Revelation."
After hometown hero BTRO is slain on the dance platform by thug leader L
Dubba E, his protégé younger brother JTRO (Jason Trost) goes into
isolation, vowing never to duel again. One year later, The FP is in
ruins, and JTRO must find the courage to return and restore order in a
ruthless battle for revenge that can only leave one man dancing. From
the producers of PARANORMAL ACTIVITY and featuring narration by James
Remar (THE WARRIORS), THE FP is a fury of fierce footwork, triumphant
montages and neon street wear that Moviefone calls "a rare ready-made
cult hit."

Drafthouse Films, the distribution arm of Alamo Drafthouse, debuted in 2010 with the theatrical release of FOUR LIONS and was named one of Time Magazine's "Top 10 Films Of The Year."  Drafthouse
Films is dedicated to scouring the globe in search of visionary,
provocative and diverse features to integrate into the ever-growing
Alamo Drafthouse entertainment lifestyle brand, which along with the
Alamo Drafthouse Cinemas includes: Mondo, the collectible art boutique;
Fantastic Fest, the largest international genre film festival in the US;
and the pop culture website Badass Digest. Drafthouse Films will
distribute films theatrically and through home video, VOD and direct to
consumer sales. The 2012 release slate includes the stunning HD RealDTM
restoration of '80s cult western COMIN' AT YA! 3D, Michael R. Roskam's
debut feature film and Best Foreign Language Film Academy Award-nominee
BULLHEAD, Mikkel Nørgaard's internationally acclaimed comedy CLOWN, and
SXSW '11 favorite THE FP which Moviefone calls, "a rare ready-made cult
hit." Together with producing partners Magnolia Pictures and Timpson
Films, Drafthouse Films is also currently in production on the
much-anticipated THE ABC's OF DEATH -- an anthology film featuring
segments by 26 different directors that Fangoria calls, "a stunning roll
call of some of the most exciting names in horror across the world.

Tugg,
Inc. ("Tugg") is a collective action web-platform that enables
individuals to choose the films that play in their local theaters.
Through Tugg, individuals are empowered to select a film, screening
time, and nearby theater, and then spread the word to their immediate
and online community. Once a necessary amount of people commit to
attending, the event will be confirmed, and Tugg will reserve the
theater, manage ticketing and ensure delivery of the film; allowing the
audience to sit back and enjoy the show.  Tugg is currently working with
exhibitors Alamo Drafthouse Cinema, AMC Theatres, Bow Tie Cinemas,
Cinemark Theatres, Goodrich Quality Cinemas, Rave Cinemas and Regal
Cinemas, and will be expanding it's exhibitor offerings in the coming
weeks. These exhibitors will provide theatrical venues for individually
curated events showcasing Tugg's growing library of hundreds of studio
and independent films.