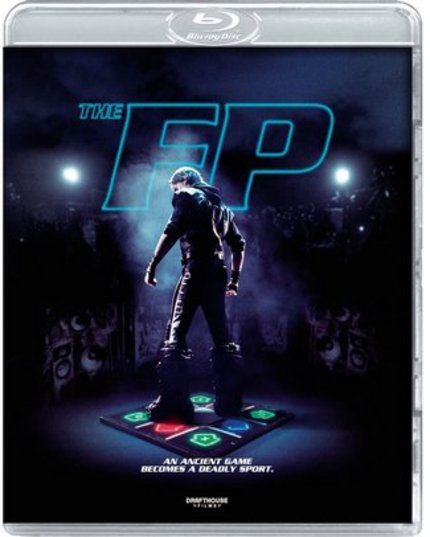 The FP is a film about which most people will make up their minds before the trailer even ends. Its overtly stylized dialogue and aesthetic is something that film fans will either find appealing as a lark or irritating to the point of torture, and I'm guessing there won't be a whole lot of middle ground.  When I first saw the trailer for the film, I wasn't exactly sure what to make of it. However, I figured I'd give it a chance. Now I've seen it, and I must admit it grew on me, and I ended up kinda liking it.

The FP is Frazier Park, California. A dystopian suburb on the edge of an apocalypse. Control of the town is being fought for by two crews, the 245, and the 248. Their battleground of choice, a arcade dance game called Beat Beat Revelation. When the 245's L Dubba E 187's the 248's BTRO, the 245 gains control over The FP, and shit starts to get ill, in a bad, bad way. It's now up to the 248's JTRO, the prodigal son, to return and set things right in The FP, but can he overcome his own bullshit and throw down for real when the time comes, or will L Dubba E turn him into a pussy ass bitch? These are the questions The FP dares to take on.

First of all, that dialogue you hear in the trailer, pretty much the whole movie is like that. So, if that's going be a deal breaker regardless of the quality of the film, know that up front. Fortunately, there is one character who doesn't speak the absurd slang of The FP, and that's our hero, JTRO (co-director, co-writer Jason Trost), and he does most of the talking. However, his partners in crime KCDC (Art Hsu) and BLT (Nick Principe) come up with some of the whackest slang ever, and to be honest, it really kinda grew on me. I actually found myself turning on the subtitles, just to be sure I didn't miss anything, it was pretty amusing. JTRO realizes that his homeboys are clowns, but they are his clowns, and the FP is his town, so even after he returns to the BBR underground, he's willing to go along with them because he knows they'd die for him. It's almost sweet.

In a film full of explosively off-the-hook performances, none is bolder than Lee Valmassy as L Dubba E. Dubba E is at 200% all the time, he's never anything less than completely pumped. The fact that this mild mannered actor, as evidenced in the bonus material, can deliver lines like, "Am I about to bust a nut up in this bitch?" with a straight face is commendable. The character is an absolute douche, but as with most power crazed assholes, he's got his own serious issues, and there is the occasional chink in the armor that makes even him a little bit relatable, even when he's having barf contests in a vacant parking lot.

The Trost Brothers, Jason and Brandon, have cinema pumping through their veins. The fact that they chose this oddball idea to be their first feature shows how much true dedication can do. While Jason is the star of the film, and came up with much of the story line, it's Brandon who really brought the experience needed to make this film a success. Brandon came straight from acting as cinematographer on Neveldine/Taylor's Crank: High Voltage to The FP, and brought some of his experience to bear in his own film. It shows, The FP looks great, and the hyper real style that comes with shooting on high end prosumer camcorders works extremely well for the visual approach that the Trosts were looking for.

Also of note is the pitch perfect background score, which is a mix of '80s exploitation synth scoring and video game tracks. The composer for the project was George Holdcroft, another first timer, who put together a score worthy of the craziness of the film, and it helps to transport the viewer into this bizarre, almost Thunderdome-like world. The score is something that even some people who don't like the film might actually go for, and that's saying something.

I must admit, once I let myself go and bought into the central conceit of The FP, I was consistently entertained. It is by no means a masterpiece, but it is the kind of film that somehow feels as though it can only be a first feature. The Trosts made their film, and that's admirable, even more impressive is the fact that they pulled it off. I really liked The FP, that being said, it is is most definitely NOT for everyone. I'd guess that about half of the people who watch this film will probably haaaaaaaaaaaaate it, but hey, you can't make an omelet without breaking some eggs, and I'd rather be a part of a project that evokes a negative opinion than no opinion at all, so good on The Trost Brothers, The FP is a success.

The FP marks Drafthouse Films' first home video venture with a Blu-ray release through Image Entertainment. First things first, collector geeks, The FP's spine is noted as No. 2 (Bullhead will be No. 3), which means that we're getting yet another new label tempting our wallets with spine numbers. Drafthouse Films' Evan Husney has told me that technically, Four Lions was No. 1, but since that was a Magnolia release, it doesn't have the spine number, though Husney assures me that there will be some sort of goodie coming up to help our OCD shelves look complete, so thank you for pandering to the nerd nation, Drafthouse Films.

Okay, onto the A/V... The FP looks and sounds fantastic. With the film having been shot on high end digital camcorders, there is no film intermediate to fuck up, so what the Trosts want you to see, you see, and it looks pretty damned good. Due to the inherent limitations of prosumer cameras, there are some instances of blooming highlights and loss of shadow detail, but that comes from the source and is not a failing of the disc in anyway. All in all, I was pleasantly surprised by the image quality on the disc. The HTS-HD MA 5.1 sound mix is even better, without the inherent limitations of the cameras, the sound is able to shine, and Holdcroft's score is a big winner that sounds great in full surround. Awesome stuff.

The FP on Blu-ray advertises over two hours of bonus material. This includes a feature length audio commentary from the Trost Brothers, which I think is kind of whack, even if technically true. The more unfortunate part is that the commentary track is mixed INCREDIBLY low, meaning I had to crank my system up to an absurd volume to hear Jason and Brandon talk about their film, and they were surprisingly low key about the whole thing. While informative, I definitely preferred the other bonus stuff over the commentary. For example, Never Ignorant Gettin Goals Accomplished: The Making of The FP is a solid making of that takes a look at the origin of the material and the Trosts' history in filmmaking. I really enjoyed this feature, which gives a substantial look into the film and shows that there was a lot at play in creating the world of the film, and it's not as flippantly constructed as one might be tempted to think, bravo guys. There is also a featurette called The FP in The FP, in which The Trost Brothers and Tim League show in film at Frazier Park's Fiesta Days celebration to locals. It's an interesting look at this cozy suburban town that in no way resembles The FP shown in the film. Fun stuff, if brief. Finally, the disc includes both the green and red band MPAA trailers, of which, the red band can be found below.

I have to admit, I was ready to hate The FP, but I didn't. Still, this might be a dangerous blind buy. If you are completely sold on the film by the trailer, or have already seen it and loved it, this is a great buy. However, if you're iffy on it, give it a rent first, it might surprise, it might not.
Tweet Post Submit

Order The FP on Blu-ray at Amazon