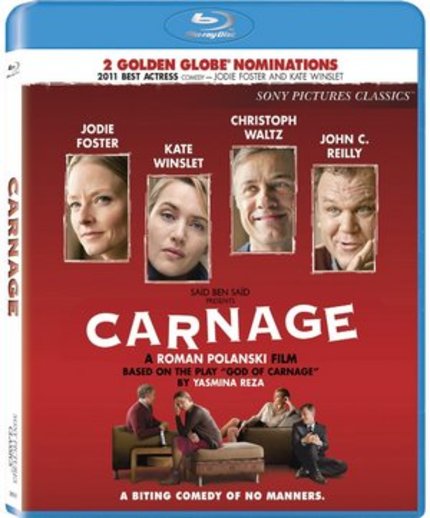 One danger of transposing stage plays to the big screen is the challenge of creating something cinematic from a form that is inherently more contained. The challenge is even greater with plays whose action focuses on only a very few characters. Typically these kinds of films ring really false to me, the most glaring example in my own mind is Six Degrees of Separation, which, in spite of some great performances, still never manages to outgrow its stage roots. There is the rare occasion when these types of films work, however, and Carnage joins that small league of films, like David Mamet's Glengarry Glen Ross, that succeed in doing what is so difficult.

Two couples meet following an playground altercation in which one child hits another child with a stick under apparently mysterious circumstances. Polanski roped in some magnificent performers to act out this piece of work in which adults regress to babbling, screaming, fit-pitching children who couldn't calmly converse their way out of a paper bag when it comes to their children. Jodie Foster and John C. Reilly play Penelope and Michael Longstreet, the parents of the "victim, who was on the receiving end of the stick. They've invited Kate WInslet and Christoph Waltz, as Nancy and Alan Cowan, the parents of the offender, over to their house to discuss the incident and perhaps bring civil closure to the event.

That's the idea, anyway. After a while, the Cowans grow tired of defending their child and the Longstreets become defensive about the idea that perhaps their son deserved what he got. Then everything goes to pot.

I'm not sure about Yazmina Reza's play, God of Carnage, on which the film was based, but Polanski's story is paced quite briskly, and within the seventy-nine minutes it takes to get from one end to the other, we are given quite a treat. The action, and dialogue, never stops, we're rapt as we watch all of the characters swoop from one end to the other of the emotional spectrum to the other over and over again. One disastrous misstep after another continues to hamstring any attempt to gain closure, as the couples not only double down into their own camps, but eventually devolve and the cracks in their marriages becomes thorns in everyone's side.

Even the best of casting sometimes cannot save these stage adaptations, but Polanski makes some key choices that help the film along. The film opens and closes with the children in the park, immediately intimating to the viewer that a world exists outside of the apartment where the bulk of the action takes place. The other key element in breathing cinematic life into this project is the choice to use a lot of natural light in the interior sequences. The open windows and ambient light of the city also help to remind the viewer that this isn't a stage play, which is a small thing, but helps a ton in creating a more open atmosphere than a stage could manage.

It isn't intentional that I somehow end up reviewing films that affect me on an emotional level, but there was something about Carnage that really resonated with me. I am the parent of a seven year old child who, earlier in the school year, broke his wrist when a playmate pushed him from some playground equipment. I didn't arrange a meet up with his parents, however, my wife and I did (and still do) curse the little bastard for harming our angel. To this day, anytime we attend a school function, my wife can't help pointing out "the little fucker" who broke my kid's arm. Parents are brutal, and Carnage captures that fierce protective instinct in a very succinct and entertaining way.  I found myself laughing out loud at all of the ridiculous turns that the film takes, but at the same time, I could see myself saying the same things if I were in that situation.

Carnage may not play as well to viewers without children, but for you parents out there, I'm sure you'll find something with which to share a laugh. Highly recommended.

Sony Pictures Classics presentation of Carnage is exactly as good as it needs to be. Though the film was shot on film, there is little in the way of intrusive grain in the image, presumably because the vast majority of the film was shot under very bright lighting conditions, thus lessening the need for high speed, grainy film. Colors and details are fantastic, and, as I'm sure was the intent, there were no problems to take me out of the film. The audio is a rare DTS-HD 5.0 mix which omits the LFE channel, and I didn't miss it one bit. Audio effects in Carnage are few and far between, but the dialogue is crystal clear, no extra bass needed.

Carnage on Blu-ray includes a few decent extras, but surprisingly nothing specific about adapting the play to film. The best extra is also the longest in this case, a 40 minute conversation between Christoph Waltz and John C Reilly about the film and it's creation and their parts in it. A lot of good info is passed along here, and I really enjoyed it. The rest is PR fluff that is less insightful and certainly much shorter, watch it if you must.

I loved Carnage, and I can't wait to watch it with my wife as we joke aloud about our own foibles while secretly wishing we could do the same things sometimes. Check it out!

Order Carnage on Blu-ray at Amazon