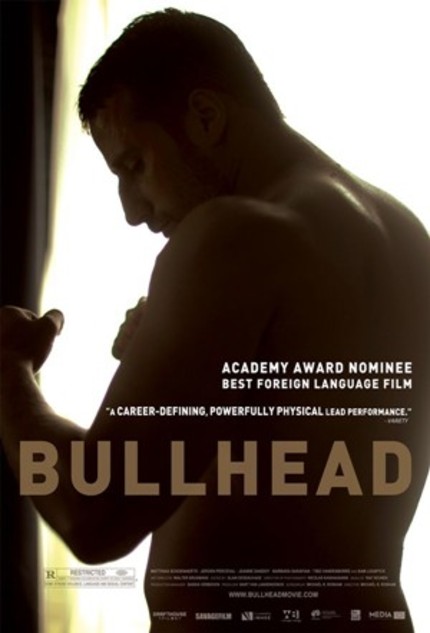 An extraordinarily powerful film, and my #1 pick among films I saw in 2011, Michael Roskam's Bullhead opens tomorrow in New York, Los Angeles, and Austin, courtesy of Drafthouse Films, before expanding to other U.S. cities on Friday, Feb. 24. Two days after that, we'll learn if Bullhead, nominated for an Academy Award as Best Foreign Language Film, will take home that prize as well.

Whether it wins an Oscar or not, however, Bullhead is definitely a film to be experienced firsthand, in a theater if possible. ScreenAnarchy's Todd Brown and James Marsh saw the film on opposite sides of the world last summer, and published their rave reviews within an hour of each other.

Todd saw it at Fantasia in Montreal, Canada:

"Set in the shadowy underworld of agricultural and illegal hormone trading, Bullhead introduces a significant new talent in Belgian writer-director Michael Roskam. It is a morally complex, constantly surprising picture, one that constantly changes shapes just as you think you've got it figured out, one that nimbly treads the line between arthouse drama and gripping thriller to create something quite unique.

"Beautifully shot and flawlessly performed, Bullhead is a strong, compelling debut feature from Michael Roskam. Remember the name for you will surely be hearing more from him in the future."

Read his review in full.

James witnessed a screening at PiFan in Puchon, South Korea:

"One of the most original crime films in recent memory. Roskam exposes the shady Belgian beef industry as a world run by gangsters and opportunists where corruption, hormone peddling and even murder have become all-too-common occurrences. Within this unlikely, but always fascinating setting, the film hones its focus on the very personal tragedy of a single, profoundly troubled individual and his ongoing struggle to embody the macho persona he so desperately projects.

"With a deftness that seems at once effortless and painstakingly conceived, Roskam's script reflects a very personal deception within a much grander charade that defines an entire industry and affects an entire nation. It is the story of a personal tragedy enveloped within a national crisis, a story that feels both universal and deeply personal. ... [It] is a strong, confident and assured thriller about lies and deception that is both deeply vulnerable and achingly fragile."

The film enjoyed its North American premiere at Fantastic Fest in September and was subsequently snatched up by Drafthouse Films for U.S. distribution. I saw it at Fantastic Fest and found it to be a completely mesmerizing, unsettling picture, a story where the ground constantly shifts beneath your feet, and you're never quite sure where it's going next. It's a stunning achievement.

Watch the trailer at Apple.com