Sometimes it just takes one little moment to make (or break) a film. These are some of the moments that made our ScreenAnarchy contributors' list for the best of the year. 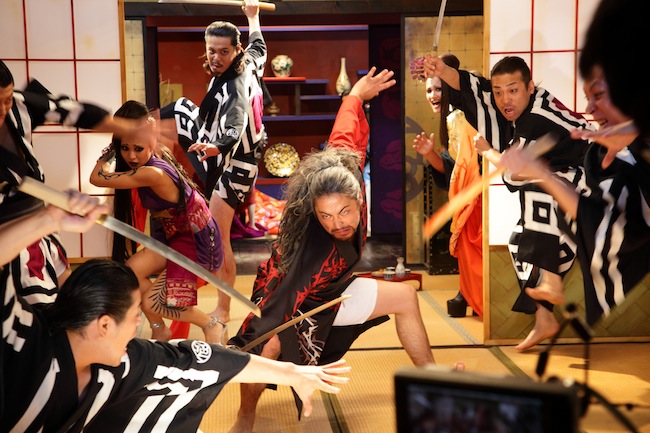 I had the good fortune to catch Ishibashi's Milocrorze at a market screening in Hong Kong with James Marsh early in 2011. At a certain point Marsh's bladder gave out and he had to run to the washroom. Upon returning he asked me what he'd missed. "Only the best single sequence of the year." Yep. Marsh closed the door and the film immediately launched into an absolutely jaw dropping, super slow motion, tightly choreographed single shot action sequence that ended moments before he returned. I was kind of joking when I answered him then but I'm not now. It really is the best single moment of the year, though the dance numbers earlier in the film aren't far off, either.

The Tree Of Life
Director: Terrence Malick
by Joshua Chaplinsky

A divisive film, to be sure, and yeah, we could have done without the whole "Sean Penn in the afterlife" bit, or Brad Pitt making his "What's In The Box" face when he receives bad news, but they just don't make 'em like this anymore, which is a shame. Because even if you don't love The Tree of Life, you damn well gotta respect it.

And I defy even the most cantankerous critic not to be awed by the 20-minute creation of the universe/evolution of life sequence. If you saw the film in a quality theater with top-of-the-line sound equipment, you were treated to a borderline transcendent experience. If you watched it on your computer or iPhone- fuck off! You're doing it wrong. It's probably the most memorable "scene" in any film I saw this year, except for maybe that one in Sleeping Beauty where the old man rubs his old balls on a naked Emily Browning while he puts his fingers in her mouth and calls her an uppity cunt. But unlike that scene, the one in The Tree of Life is memorable in a good way.

This car flip is the action sequence of the year. Here's what I wrote about it in my review from July:

One of my favorite shots is the final shot of the trailer, in which Singham drifts a car in a complete circle, stepping out of the car mid-skid, and shooting the front tire out of a jeep, which then flies into the air. That, by itself, is ridiculous in a very awesome way, however, the stunt continues in the film, with the Jeep flying through the air in a roll OVER Singham's head, and during this airborne roll, Singham grabs the goon out of the flying car's driver's side window and pins him to the ground as the car flies over his head. It is absolutely mad and inspired gales of laughter/cheers in the cinema, and rightly so. This is the kind of over the top action that Singham delivers, and it is uproariously fun. If only there were more of this and less of, well, almost everything else.

In discussing this film, a fellow critic and friend felt that the only emotion The Artist generated was joy, and he wasn't sure if that was enough to make it a good film. I disagree with him on this, though I will say that joy is the dominant emotion I felt when watching it. And I don't care. It all cumulated into the final scene of song and dance between the two lead characters, and the only lines of dialogue in the film. The scene is glorious in its celebration of movement and song, as a celebration of the wonder of the film as technology and storytelling apparatus.

Michel Hazanavicius' The Artist--in its silent, black and white glory--is one of the great crowd pleasing movies of 2011 to both film aficionados and general audiences. But buried right in the middle--when the film threatens to sag a little--is the main character having a peculiar nightmare. George Valentin is a superstar of silent cinema who refuses to get with the times and convert to making talkies. All of his ego and anxieties come to a head in a dream sequence where Vanentin cannot talk, and everything around him makes jarringly loud noise. While this scene makes little sense in terms of George's life - obviously even in the silent era, real Hollywood life was all noisy hustle and bustle - but within the particular universe of the film, it is delightfully Lynchian in its execution. Why wouldn't a silent film actor dream in sound?  Frankly, I'm surprised, that he didn't dream in colour! 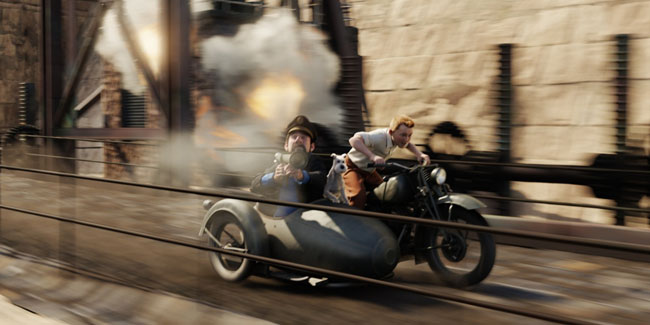 The Adventures of Tintin
Director: Steven Spielberg
by Ryland Aldrich

Rarely have I ever experienced the visceral excitement that the Begghar Chase Sequence in The Adventures of Tintin provides. This is 3D animation used to its fullest. Brought to us by the team at Weta (the same team responsible for the 3D of Avatar), this action sequence is part video game, part rollercoaster, and all wild ride. While the film has its flaws (it runs a fair bit too long), this scene is well worth the price of admission... even though that price of admission is probably close to $20!

Lars Von Trier's sad tale of the end of the world, as brought on by the crippling depression of two rather detestable sisters, only worked for me in pieces, but none more so than the rousing climax that sees the big blue sad planet of Melancholia bear down on our heroines as they cower in a flimsy wicker fortress of their own design. It's a wonderful combination of thunderous audio, gorgeous visuals coupled with the overwhelming sense not of calamity, but of relief - that nobody need suffer anymore and everything will be okay, together in oblivion. Not since Stanley Kubrick's Dr. Strangelove has The End of Days looked so appealing, and as such is--for me at least--the single most powerful scene of the year. 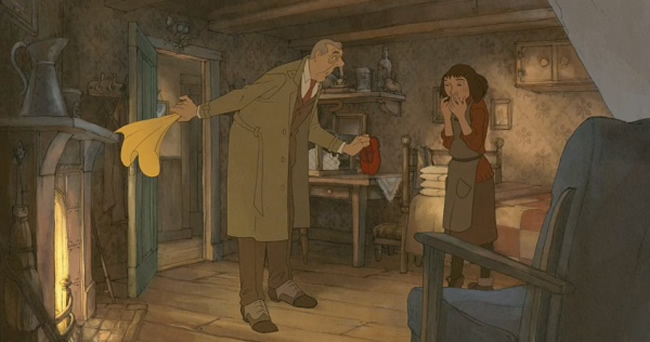 The entire opening of The Illusionist is a brilliant stanza, intensely poignant and intimate while simultaneously being almost operatic in its dramatic setup. We see the threadbare stage magician Tatischeff (an animated version of the screenplay's author, the legendary French mime and comedian Jaques Tati) being upstaged by a group of hipsters playing something called rock and roll, but somehow becomes the de facto gaurdian of the ragamuffin girl, Alice, who sweeps the floors and cleans the dressing rooms of the ailing nightclub. More of a sequence than a scene, but I am going to stretch the rules a little and say this is the best stand-alone 5 minutes of cinema this year.

I've never been a guy who regularly calls out favorite scenes from movies, but I couldn't help challenge myself here and really ask "what stood out in the last year? What was that one moment that hit you, had you fully engaged?" Well, that'd be none other than the scene in Take Shelter when Michael Shannon's Curtis LaForce is asked by his wife, played by Jessica Chastain, to open their storm shelter's doors. In a movie about the mercurial power of faith and belief (amongst many other things) this moment had me--proving all the old movie going clichés to their truest--on the edge of my seat, with tears in my eyes. I was there up on screen with Curtis and his family, standing at a crossroads, a crossroads buried ten feet underground and lit by the filmy yellow hue of an electric lamp, and there was that faith of a wife in her husband: to believe in him, so that he could believe in himself. As saccharine as that may sound Shannon, Nichols and Chastain manage to make it nothing less than achingly terrifying and beautiful. 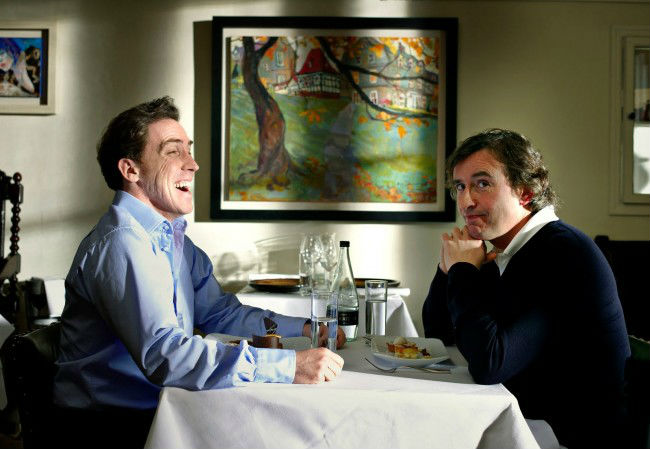 "Dueling Caines": Steve Coogan and Rob Brydon are on a road trip in the north of England, visiting six gourmet restaurants for a newspaper article Coogan has been asked to write. Over dinner one night, Brydon does his best impersonation of Michael Caine, only to be challenged by Coogan, who does his best impersonation of the actor. They go back and forth like the hillbilly banjo pickers in Deliverance, topping each other with every turn.

Loads of films this year had a memorable scene and I'd love to discuss them all, but the problem is: this subject is inherently spoiler-filled. The very power of these scenes is often found in coming upon them unsuspecting, so telling about them seems like... telling!

This is why I'm being deliberately obtuse about what's happening in my favorite scene of 2011, which is the grand finale of Confessions. However, I can try to explain why I love it. When the finale starts, the film has, in all honesty, become quite boring. It drags a bit and you are aware of most revelations, just waiting for Confessions to end so you can tell people it had a good start but unfortunately petered out. Only... it doesn't. What happens at the end is a glorious combination of soundtrack, special effects, almost impossible editing and drama. It's an incredibly difficult and intricate sequence of shots, and when it ended I felt punched, exhilarated and devastated at the same time. And this scene made Confessions as a whole one of my favorite movies of last year. 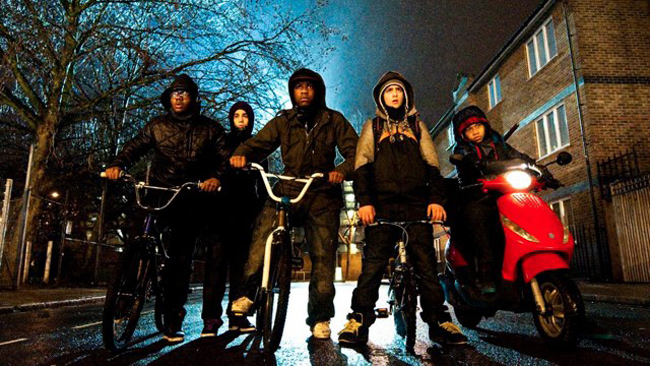 It's not a long moment, and it's shamelessly manipulative (as only the best "Best Scenes" typically are), but the final moments of Joe Cornish's directorial debut get me every time. Following an earned shift in the outlook of local young tough Moses (John Boyega), the ending isn't just a literal rallying cry for the movie's young hero but a figurative one for anyone up against an uncaring, blind system. Cornish never lets the young hoods who become heroes off easily in his film, never excusing their criminality or making it sympathetic, but he does nudge them to where they need to be so we can like and respect them, and by the end, with Basement Jaxx's track "The Ends" blaring from the speakers like a call to arms, we're completely and totally on their side.