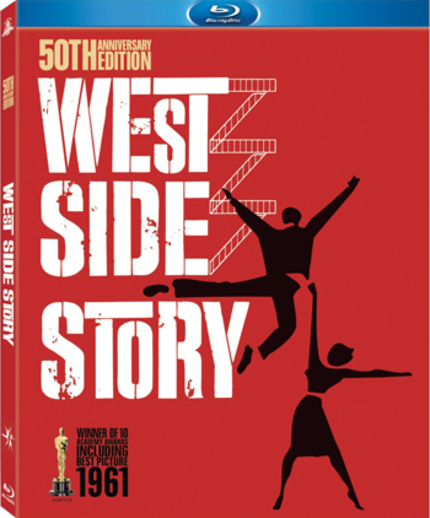 I have to confess to watching West Side Story almost as a challenge to myself when it hit Blu-ray simply because the first time I attempted to watch it--sometime around the release of the 2003 set--I had to throw in the towel around the gym dance scene, just before Maria (Natalie Wood) and Tony (Richard Baymer) meet for the very first time. I couldn't--excuse me for saying--get into the rhythm of the whole thing. It felt too garish, a little too earnest, and way too confused about its moralizing about race in spite of casting the very white Wood as the Puerto Rican immigrant Maria. And yet, I'm able to forgive every out-and-out racist, sexist, broad exploitation movie out there, so the hell was my deal?

So eight years later, here we are, and I've given the movie another go--on a pretty spiffy anniversary Blu-ray no less. And while some of my basic issues with the movie remain (sue me, I'm a grouch), I have to confess as a late member to the West Side Story party that the movie is actually kind of brilliant. Well, except for the Natalie Wood parts, but more on that in a bit.

For those few of of you unfamiliar with 1961's Best Picture Oscar winner (including nine other trophies that year), it was a then-modern retelling of Romeo and Juliet with rival street gangs standing in for the Capulets and Montagues and the central beef being over the white Jets looking to keep the Puerto Rican Sharks out of their territory and vice versa. Enter Maria who locks eyes with Tony across a dance floor and sparks fly, the kids fall in love, and it ends the way these things sometimes do when kids love too hard and everyone around them is full of hate. Yes, it wears its emotions on its sleeves and I suspect that it was probably square to the youth watching it at the time of its release, but damn if this isn't a beautiful movie with beautiful songs, and athletic, exuberant dancing, and wonderful performances by just about everyone involved. Honestly, the beauty of the choreography demands that every modern action director see West Side Story just so they can see how to stage coherent, dynamic, and kinetic events while maintaining the flow of the story.

Save for Woods who's... we'll, calling the late actress "bad" here isn't exactly fair. She was miscast and then saddled with a very terrible accent which meant over-enunciating every word to a maddening degree. This wouldn't be so bad if her singing seemed plucked from another production entirely. Whereas nearly every other actor brought a nearly conversational note to their songs, Wood was doing this operatic thing which had the effect of making her sound "off" among all of the other characters and actually caused her to break character since she could rarely maintain that terrible accent. I've spent more time harping on this issue than it's honestly right to, but it's such a strike against an otherwise excellent movie and one of the most distracting pieces of casting I think I've had the opportunity to encounter.

Still, that's one gripe being leveled at a five decade old movie that's already faced its fair share of criticism and due acclaim. What's the disc like, you ask?

Gorgeous. If you've seen it before, you know it's an incredibly vivid film rich with color and detail. You can actually pick out a lot here, from the clothing to some minor imperfection in the actors' skin. That's a weird thing to point out, sure, but yeah, this is a pretty fantastic-looking disc. Likewise, the audio is very rich in its 7.1 mix.

If you're going to see West Side Story for the first time, this is the way to do it.

The features are all detailed below, and many of them are simply ported over from the '03 release. But of the new content, the "POW!" feature breaking down the dance numbers in the film is simply the best, providing talking head interviews that illuminate some of the process and challenges in executing both the film and stage versions of the performances. Endlessly illuminating, I'd advise checking this out if you're eager to revisit the film.

The West Side Story 50th Anniversary Blu-ray is available now.