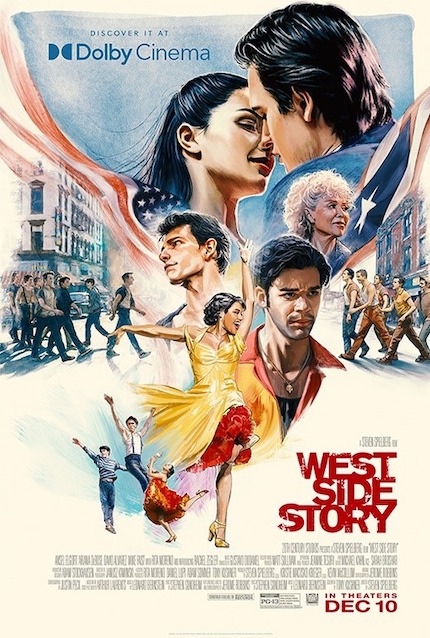 If you don't think a new version of an old story deserves your time and attention, may I introduce you to the director?

West Side Story
The film opens Friday, December 10, in movie theaters only. Visit the official site for more information.

Steven Spielberg caught my eye long before I knew why.

In adapting a stage musical that shook Broadway in 1957, Spielberg has chosen to make a movie musical that takes spectacular advantage of his own filmmaking abilities, as well as the cinematic medium and all that is possible in this day and age, while respecting the enveloping dark tones that made the original musical a game-changer in its time. He also pays homage to the first film version, co-directed by Robert Wise and Jerome Robbins and released in 1961.

Watching the movie feels like a highlight reel of Spielberg's career, by which I mean that the story flows from Point A to Point Z with grace and elegance. The songs and the dance numbers burst out in the fashion of classic movie musicals from the 1950s, always justified from a story standpoint but never from a perspective resembling real life.

By choosing to keep the original musical's period setting (Upper West Side of New York City, mid-1950s, as neighborhoods were being cleared to make room for Lincoln Center), Spielberg elides elements that would be objectionable today, and also allows him to make a film, based on a screenplay by Tony Kushner, that echoes closely the original musical's narrative, updating it only in certain personal relationships and how they develop.

Three characters form the collective spine of this version, thanks to how they are written and performed: Maria (Rachel Zegler), Anita (Ariana DeBose), and Valentina (Rita Moreno). Eighteen years of age, Maria is still learning the ways and mores of a big city and a neighborhood that will soon be razed.

Her protective older brother, Bernardo (David Alvarez), feels more responsible for her than ever, now that their father has died, while his girlfriend Anita is happy to take on the role of her loving and encouraging big sister. The long-time proprietor of the neighborhood drug store, Valentina is respected by nearly everyone and has given the recently-paroled Tony (Ansel Elgort) a job, though his best friend Riff (Mike Faist) keeps nudging him to return to their street gang and help them beat off the threats posed by a rival street gang.

Though I'm not a die-hard fan of movie musicals, it's difficult to resist admiring a very well-made film, even if it is a musical. I've seen and admired the 1961 film version, so I recognized when Spielberg's version tips its hat to the earlier version, but mostly I got caught up in his signature camera moves and framing, which seem ideal for a movie musical, even though he's never made one before in its entirety. (Though who can forget the opening of Indiana Jones and the Temple of Doom?) Spielberg knows how to compose widescreen images that take full advantage of the wide screen, which makes the film easy and enjoyable to watch in a movie theater, much more than I had anticipated.

The director's two previous remakes, Always (1989) and War of the Worlds (2005), were both set in the present, which suggests that with West Side Story, Spielberg has more fully acquiesced to time and nostalgia. What the film definitely proves, however, is that Spielberg is a master artist who enjoyed remaking a perfectly good musical romance in his own style and with all the resources that are available to him, even if it doesn't rank in the top tier of his own films, which have fused his filmmaking style with subjects and themes that haven't been explored before.

Splendidly suited for the big screen, the film is bolstered by very good performances by a talented roster of actors who bring their roles to life with good humor and gusto. (Ansel Elgort is not particularly well-suited for his role, unfortunately, but he does his level best; he tried hard, darn it!)

The songs may be more familiar than you may realize. And the darker tones favored by the original stage production are honored too, making West Side Story a complete, albeit familiar, success story.

Do you feel this content is inappropriate or infringes upon your rights? Click here to report it, or see our DMCA policy.
Ansel ElgortRachel ZeglarRita MorenoSteven SpielbergUS