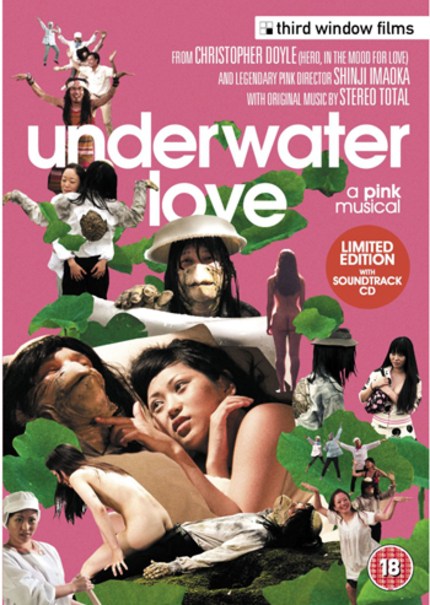 The high-concept low brow film is nothing new, especially among those of us who follow independent films.  Unfortunately, most of them seem to fail in either one or both of those categories, as it is a difficult tight rope to walk.  Shinji Imaoka's Underwater Love was conceived as a high concept work and wasn't necessarily an organic extension of his own imagination, however, in spite of this, he's managed to create something quite special. Third Window Films presents us with Underwater Love for the first time on English subtitled DVD with quality extras and a limited edition run including Stereo Total's fun, lo-fi score. Once you surrender yourself to the experience, this film is a sweet, unassuming piece of work that just happens to feature Kappa dong, and I can live with that.

From Germany's Rapid Eye Movies and Japan's Kokuei Company comes a whimsical pink film musical about a woman and a sea creature.

Directed by pink-film veteran Shinji IMAOKA (Lunch Box, Frog Song), shot by Christopher Doyle - the famed cinematographer behind Hero and countless films by Wong Kar Wai - and with music by Germany's Stereo Total, Underwater Love - A Pink Musical promises to be unlike anything you've ever seen.

Asuka works in a lakeside fish factory. She is just about to be married to her boss.One day, she encounters a Kappa, a water creature living in the lake and learns that it is the reincarnation of Aoki, her first love. What ensues is a zany spectacle of love, music and sex.

Underwater Love is a film that is greater than the sum of its parts.  Everything about the synopsis and everything you'll find to read about it will give you one impression, but the film will leave you with quite another. Yes, it is a pink film and there is some fairly explicit sexuality.  Yes, it is super low budget and it shows. Yes, it is about a man who returns from the dead as a Kappa to confront his first love. The thing that took me by surprise was the warmth it also emits, which is hard to translate into a review or a blurb.

Underwater Love is a almost a living tableaux of desire, regret, and redemption. Asuka, the lead character played by actress Sawa Masaki, is a very lively character, played with wide eyed wonder, even as she grows to an age where she feels the strong urge to settle down. Settling is the perfect term for the path she's chosen as the film begins, when she finds herself engaged to marry her boss.  However, she finds her inner child awakened when she discovers a Kappa, a water spirit, near her workplace, and that child is further invoked when she learns the Kappa carries the soul of her first love, Aoki, who drowned when they were both in high school.  Asuka plays her ambivalence with skill, oscillating between her adult self and the teenager sick with a fatal case of puppy love for Aoki.  At times the two characters bleed into one another, leading Asula to flights of fancy, here represented by the many musical sequences.  It's all terribly romantic.

Aoki, the Kappa, is represented in a very strange and yet endearing performance from Yoshiro Umezawa. His performance is so understated as to seem almost lethargic, yet somehow his persistence is hypnotizing, even when his acting style should drive me nuts.  He is the docile yin to Asuka's exuberant yang, and somehow they match perfectly.  Aoki represents the life that Asuka has abandoned in search of stability, it's not exactly a subtle reference, but it is an effective one nonetheless, and it is a choice with which Asuka struggles throughout the film. Aoki is merely the vessel through which Asuka seeks to find herself among the detritus her life has become.

All of these themes and struggles permeate a film punctuated by loud, sweaty sex almost makes you wonder which extreme is holding the thing together.  The sex scenes are only sporadically erotic, and are more often a reflection of the characters emotional state of being rather than their physical state. They are shot with the grace and care of actual sex, that is that they are often chaotic and loud with little direction.  This style of shooting, largely attributable to celebrity DP Christopher Doyle, lifts the film's visual style above its station on several occasions, but none more so than these scenes of strained and often detached coitus. It works, by Jove, and Doyle's super stylized magic eye is a large piece of the pie.

For all of Underwater Love's quirks and intentional goofiness, the film never steps over the line into farce for me. I'm sure that when REM commissioned a pink musical from Shinji Imaoka and hired Christopher Doyle to shoot the thing, I'm sure they had certain expectations. On paper, this movie looks like a goofy romp, on the screen, however, it is so much more.  Imaoka and Doyle manage to transcend the material they are given and deliver a real movie, not a joke. I remain stunned, even after having seen the film twice, that it works on such a primal level when all indicators point to a comical failure. Underwater Love is magic.

Third Window's release of Underwater Love is pretty fantastic.  The film was shot on a shoestring budget, and as a result the A/V quality isn't going to rival any of the big ballers out there, but the lo-fi sensibilities somehow add to the film's immediacy and undercut the fantastic nature of the subject matter in a very contrary way.  It has almost a documentary feel in some instances, which provides just enough distance to let the film unfold without feeling staged at just the right times. The image on this DVD betrays the film's budget, however, it is never terribly unpleasant and represents the experience I had theatrically fairly well. The audio track, while nominally a 5.1 surround track is very front heavy as there isn't a whole lot of action, but it supports the dialogue well and really exploits the fantastic original score from Stereo Total beautifully.

This disc is also packed with more extra features than we are accustomed to seeing from Third Window except on their big releases, and the film is well served by them.  There are three interviews with Christopher Doyle ranging from 8 to 25 minutes in length.  These interviews provide an invaluable outsider's point of view of the film and it's intentions as he understood them.  I really enjoyed listening to Doyle, who is someone who really has a wonderful grasp of film making from all angles.  There is also a 15 minute interview with director Shinji Imaoka, who describes not only his approach to the material and his script and direction, but also gives a nice brief background on the nature on pink films in general.  The main extras are rounded out by three "porcupine" shorts wherein Christopher Doyle set up three webcams to monitor the shooting of the film's first sex scene, and they give a very cool bird's eye view of the proceedings.  In addition to these neat behind the scenes materials, there is also the wonderful first look trailer we premiered here at ScreenAnarchy, as well as trailers for other great Third Window titles.  This limited edition also includes a CD of the amazing Stereo Total soundtrack, which has been spinning in my player since I got this screener.

I cannot say enough good things about Underwater Love, a film which will surely make a good case to appear on my year-end top ten list.  Third Window Films is currently the only distributor with the balls to release this film, and they've done a wonderful job with the package.  I highly recommend this set!