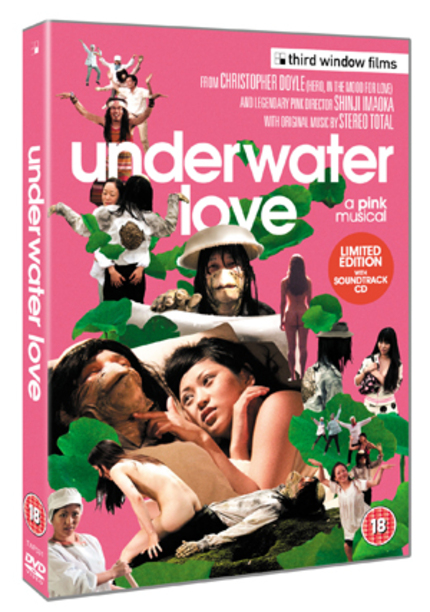 As I sit here, I have Sawako Decides and Quirky Guys and Gals sitting beside me waiting to be reviewed, but I couldn't wait to pass along this good news.

Our friends at Third Window Films are releasing a special limited edition DVD of Underwater Love that includes a CD of the catchy-as-hell soundtrack from Stereo Total.  This edition will be limited to 2,000 units and the CD will not be available elsewhere.  In addition to the soundtrack, there are also several neat looking interviews with Christopher Doyle and director Shinji Imaoka.

Asuka works in a lakeside fish factory. She is just about to be married to her boss. One day, she encounters a Kappa, a water creature living in the lake and learns that it is the reincarnation of Aoki, her first love. What ensues is a zany spectacle of love, music and sex.

I managed to catch Underwater Love at Fantastic Fest this year, and it is a really fun and charming film. Charming might not be the word usually associated with pink films, but this one breaks lots of rules, so I feel safe saying that. The film was shot with a miniscule budget and churns out a ton of heart in the process. Doyle's photography is obviously a large part of that production value, but when you add in the song and dance, and the general attitude and warmth of the film, it's hard to dislike.

In case you need a reminder, check out the trailer below, and don't forget to get your order in soon!  Underwater Love hits DVD on the 21st of November.