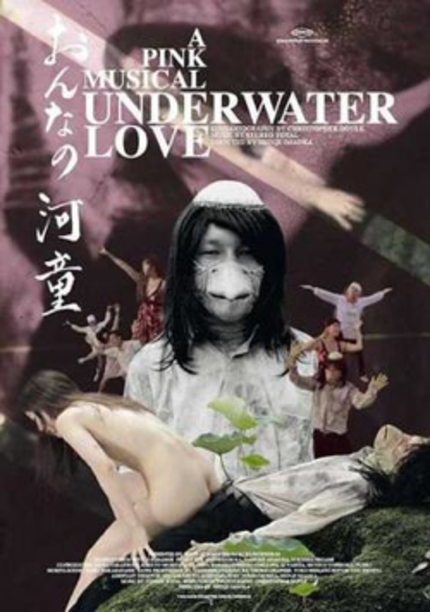 The only reason Imaoka Shinji's latest pinku film, UNDERWATER LOVE: A PINK MUSICAL, is on the radars of international filmgoers at all is because of the involvement of praised cinematographer Chris Doyle. While the result of this bizarre attention-grabbing collaboration no doubt makes Imaoka's film one of the best-looking pinku films of all time, the best news is that the cinematography is far from the only reason to recommend this strange yet rather delightful little film. For one thing, it's got boobies in it. And showtunes.

Asuka (Masaki Sawa) lives in a small harbour town and is engaged to her boss at the local fish cannery, Hajime. One day she meets a Kappa - a mythical sea creature resembling a man-turtle - who introduces himself as the reincarnation of her dead high-school friend Aoki (Umezawa Yoshihiro). She takes him home and keeps him in her bathtub, which soon enough invokes the jealous rage of her fiancé. Hajime gives Asuka an ultimatum - either the Kappa goes or the wedding is off - but when Aoki discovers from his mischievous friend, the God of Death, that Asuka has only one more day to live, he must do whatever it takes to save her. Even if that involves shoving a tennis ball-sized pearl up her backside.

Masaki Sawa makes for a genuinely sympathetic lead as a woman about to settle down because, at the ripe old age of 35, she feels she is past her prime and needs security. However, Aoki's arrival awakens her youthful exuberance, joie de vivre and hunger for love and romance - even if it's with a man with scaly hands and a prosthetic beak for a mouth.

Make no mistake, UNDERWATER LOVE is most certainly not for everyone and is unlikely to be the breakthrough pinku hit that floods international markets with video-shot softcore porn for years to come (But hey - we can dream!). It is cheaply and simply put together, utterly ridiculous in its intentions and uniquely Japanese in a way that some viewers may find alienating. However, those open to new experiences or looking for a film the likes of which they will most definitely have never seen before, then look no further. French indie band Stereo Total provide the toe-tapping, kitschy bubblegum soundtrack that will be bouncing round your head for a long time afterwards, as will beautifully composed images of crazy-looking people dressed in ridiculous costumes dancing like they just escaped from the funny farm. In other words, it's pretty much unmissable.