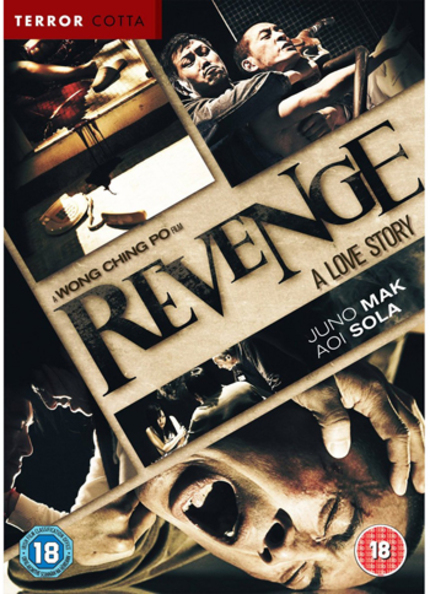 Terracotta Distribution sub-label Terror-Cotta will be releasing 2010 shocker Revenge: A Love Story to UK DVD next month!  The film has had a successful festival run at events all over the world, and this will be it's western DVD debut.  Most of the ScreenAnarchy staff have liked this one a lot, and if you check the links below, you'll find a couple of very positive reviews.  Here are the details from Terror-Cotta:

TERROR-COTTA is pleased to announce the DVD release of 'REVENGE: A LOVE STORY' (CERT 18) on 9th January 2012

A film by Wong Ching Po

Dark and moody serial killer film with a perspective from the killer's side of the story, 'REVENGE: A LOVE STORY' (Fuk Sau Che Chi Sei) at times bloody, and at other times touching and romantic.

Police are investigating a serial killer who targets pregnant women and the media have labeled him 'The Dissector' and running sensationalist headlines such as "Pregnant woman dissected alive, husband put to death in 100 degrees boiling water".

At the scene of yet another such murder, and led by undercover detectives Jeff and Kwok Wah (Chin Siu Ho, Tony Ho) they comb the area and find a known suspect, Chan Kit, and bring him in. Chan Kit remains silent throughout the physically brutal interrogation and is released without charge.

If Chan Kit is not the killer, then who is? The story unfolds step by step, jumping with flashbacks as to how Chan Kit is linked to the group of undercover policeman in the first place and the pain he has silently endured; this is a story about unconditional love.

"REVENGE: A LOVE STORY is a story about hatred. When we were drafting the story, a question arose, "who is the real victim in revenge?'

We were obsessed by this question every moment until one day, I picked up the book "Wild Grass" by Lu Xun. There was an essay entitled 0020 "Vengeance". I came up with a new thought afterwards.

Perhaps the victim is the crowd who sees the happenings but indeed doesn't know anything.

Human beings can never let go of hatred. Being in hatred is like a one way trip into darkness, you will never come back until it is settled.

We wanted the film to relieve the pain brought by hatred, but we failed. We can't imagine how torturing it is to live with hatred after all.

Now the film is finished, everyone returns to their original life. It is my time to fade out from the film. Perhaps the best way out of hatred is to leave.

The DVD details are below, as well as a pre-order link.  Revenge is Terror-Cotta's second DVD release after Death Bell, which I will try to review here soon.  Remember to support independent home video!

Pre-order Revenge: A Love Story on DVD at Amazon UK