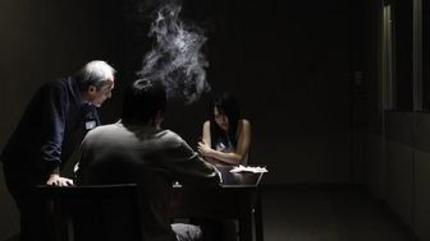 Wong Ching-Po's salacious little thriller Revenge: A Love Story is the second film from production company 852 - who previously gave us Edmond Pang's Dream Home, an ultraviolent slasher (emphasis on ultra) where Pang's trademark sly social commentary sat somewhat uneasily with stomach-churning (if blackly hilarious) effects work. In contrast, Revenge drops the breaking news approach almost entirely. It's not without pretensions of a sort, but this is a Category III production, damn it, a grim, bloody-minded action flick where horrible people do horrible things to each other, no-one gets out unscathed and we don't particularly care why as long as we get to see some sweet, sweet gore - nudity would be a bonus, too.

Wong's script, from an original story by lead actor Juno Mak, has moments where it marries wildly over-the-top brutality with actual drama surprisingly effectively. While it's far from the greatest ever story to explore the futility of revenge, the cast know how to work that theme for an undemanding genre audience. Some of the twists hit fairly hard, and the back and forth of the characters' increasingly tragic wrong turns does evoke a twisted kind of sympathy. But it's all so mercenary, from the way the violence comes in at fever pitch and stays there to drafting AV star Sora Aoi in to play the victim, and this isn't helped by the feeling Wong thinks he's turning out a thriller for the ages.

Revenge kicks off with the reveal that Kit, a serial killer (Juno Mak) is targeting policemen, or more specifically those with young, pregnant wives, slaughtering the officers and horrifically mutilating the women. But all is not as it seems; when the murderer's finally caught it turns out he's got a history with the cops he killed as well as the survivors on his trail. It becomes clear the investigating detectives want Kit to confess the details of what he's been up to partly so they can get out of ever revealing what they did to make him so angry in the first place. But if they're not going to do things by the book they're clearly going to have to get medieval in the nastiest possible sense. Only from the way Kit reacts to the threat, it looks as if this would be playing right into his hands.

What led to all this bad blood? Turns out that when Kit was a younger, happier man, he fell hard for Wing, a virginal schoolgirl played by Sora Aoi who passed by the food cart where Kit sold steamed buns every afternoon. A starry-eyed flashback shows us how young love bulldozes clean through any obstacles; it turns out Wing's mentally challenged, under the care of her vituperative elderly grandmother, but Kit carries on wooing her unabated. When the grandmother dies and Wing's threatened with incarceration in a comically evil foster care facility, Kit rescues her - only then a terrible mistake means things go horribly wrong.

A case of mistaken identity sees Wing sexually assaulted and left catatonic with Kit beaten to within an inch of his life and unsurprisingly, the police who Kit was busy carving his way through when the film began seem to have been much more closely involved than anyone ought to be. In other words there's some method to his madness - yet no matter how awful their crimes, surely no-one deserves to be stalked by a homicidal lunatic and have their loved ones hacked up in front of them, right? So Kit deserves whatever's coming to him if it lets the cops put a stop to his machinations, right? You know how it goes.

Unfortunately Wong Ching-Po seems intent on inflating Revenge's importance at every turn while simultaneously remaining largely blind to how the good old Cat III exploitation elements detract from what actual impact his story already has. The premise is solid enough, and the moral dilemma basic but effective, yet in some respects the fetishization of appalling violence is even more awkward than it was in Dream Home, plus the portentous staging and nigh-on incomprehensible intertitles suggest a searching breakdown of what revenge involves that's simply never fully realised.

Wong is a competent director and handles the more flashy, rock video aesthetic flourishes with relative restraint, and the acting works well enough. Again, at times Revenge hits a sweet spot of sorts. The epilogue seems as if it ought to be a laughable coda, but its baroque theatrics actually proves pretty emotive. Despite the fact the story's slapping tragedy on tragedy for the hell of it you still feel regret when things inevitably get worse. Yet it is undeniably manipulative, shamelessly pushing the audience's buttons. All credit to Sora Aoi for trying to break out of skin flicks, but to put it bluntly, her casting feels suspiciously like an attempt to add a veneer of legitimacy to seeing her get gang-raped and the rest of the cast sinking lower by the minute are hardly that much better.

Revenge isn't bad as such - there's too much money behind it and the filmmakers are too self-aware to ever throw character development out of the window altogether. For audiences up to the challenge it's glossy, workmanlike stuff that does manage some flashes of genuine tension and the odd sick, queasy jolt of excitement. But under the chrome it's simply not half the sophisticated thriller it seems to think. So much of this has been done before - Soi Cheang's Dog Bite Dog is immeasurably better, a far more compelling look at two deeply flawed men battling it out (bar the ludicrous final five minutes, at least). For all its seedy excess, Revenge: A Love Story doesn't really make much of a mark, and as such gets a cautious recommendation at best.

(Revenge: A Love Story was screened as part of Manchester's horror film festival Grimm Up North 2011, which ran from 6th-9th October at the AMC cinema, Manchester, UK.)
Sign-In to Vote
Tweet 0 Submit