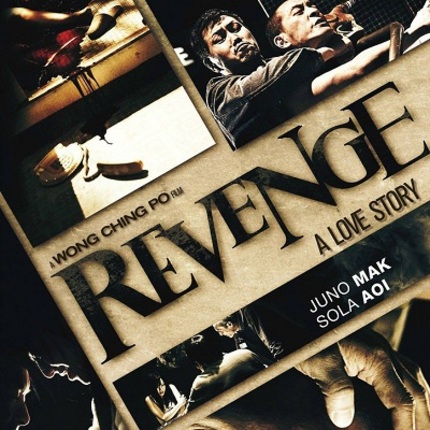 Kit (Juno Mak) is a heinous serial killer. He ceaselessly murders pregnant women, removing the baby from the stomach and brutally tortures their spouses before killing them. The woman is then left for dead. Despite this by the end of Revenge: A Love Story you will find it hard to not feel for Kit's plight.

How a film can perform such an extreme reversal lies in its story telling. This film is broken up into chapters, each one has an ominous saying preceding it, chapter one opens up with "he who is on the shortest path to hell" for instance. As he murders the camera stays intensely focused on his deed, drawing it out is almost torture for the audience, but we watch transfixed, unsure why he is doing this. The actor playing Kit devised the original story as well, and this comes as a great benefit as he really invests a lot into this complex character, without actually saying much at all.

The nightmarish lingering gives way to some intense chase scenes. A trio of policemen hell bent on taking him down eventually track him, some impressive slow motion scenes capture his anguish as he is caught and taken into a back room, beaten and tortured. Serves you right you maniac! That's what you are thinking at this point but that will all change soon.

The Dream Home production company 852 Films headed by the enigmatic Josie Ho were also behind Revenge: A Love Story and it is easy to see why. The extremely gory albeit innovative murder scenes are sparks of sick genius and are definitely to be savoured if you are a gore hound. The same gritty and saturated aesthetics from their previous productions come through here as well and enhance the darkened and sombre mood, matched up by music that is equally as ominous.

As the chapters progress the story becomes more fleshed out. Kit is a bun seller in love with an innocent and mentally handicapped school girl Wing (played by mega famous Japanese AV actress Sola Aoi), she does not say much but it is not long before tragedy strikes and Kit falls for her. One fateful night they wind up in a police station to report a crime, from this point on everything goes completely awry and Kit's present murderous intent becomes clear.

Revenge: A Love Story is a slow burning mystery asking why and who, while it does build a relationship between Kit and Wing, there is a constant tension waiting for the explanation to explain why it all went so wrong. The depravity inherent in humanity is revealed here and there is no looking away. The ending in particular is a masterstroke akin to the conclusion of Old Boy or Kill Bill. It is an unexpected revelation that even ties up the ominous phrases about god and the devil preceding each chapter. Only god judges, through the eyes of his lambs the vicious cycle of an eye for an eye ends.

On the DVD is a four part making-of, although each section is short it offers a lighter look at behind the scenes preproduction, choreography, casting Sola Aoi and most importantly the special effects and make-up.

If you can get past the baby murder, violence and rape then Revenge: A Love Story proves to be less exploitative and pointless as one may assume and an intelligent genre-horror piece. 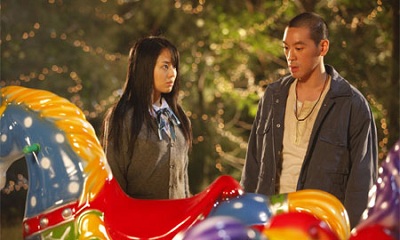 Revenge: A Love story is out now on DVD from Madman Entertainment