Marvel In The 90's: THE FANTASTIC FOUR 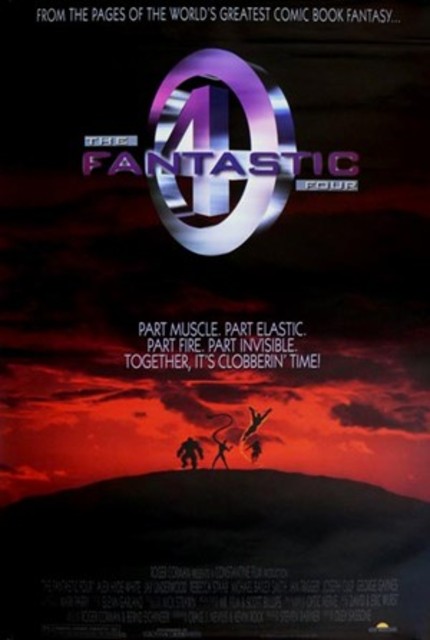 While the previous three theatrical attempts by Marvel had either failed at the box office or never even saw theatrical release, it had been four years since Marvel had tossed their hat into the ring. The time seemed right for a feature film based on Marvel's longest running property, The Fantastic Four. Surely they could at least expect a moderate return on their investment.

Well, that's not really the case. As it turns out, a German company, Neue Constantin, had secured the rights to the Fantastic Four for a number of years, and was going to lose those rights on December 31, 1992, if there was no production in motion. Marvel was actually anxious to regain control of the FF and had refused to renew Neue Constantin's option. So before the end of the year, Neue Constantin entered into an agreement with Concorde Pictures and the legendary Roger Corman to begin shooting a live action film of The Fantastic Four.

However, the story goes that unbeknownst to the cast and the crew, the film was never intended for release. The film was only produced in order to maintain the option, and once completed it was shelved, never to even see an official home video release. As with most of the films we've been looking at here, it is available in bootleg format from a number of places online and at comic conventions.

In what is becoming the mantra of this series of articles, the Fantastic Four film is hardly what one might call successful or even good, on most levels. Budgetary restraints, a three week shooting schedule, and a weak script cripple the film, making it hard to watch, except as an unintentional comedy. But if the film has one saving grace, it is its faithfulness to and honest love of Lee's and Kirby's source materials.

The film opens with Reed Richards (Alex Hyde-White), Ben Grimm (Michael Bailey Smith), and Victor von Doom (Joseph Culp) attending college together. Reed and Victor are good friends and are working on a science project involving a passing comet. However, during their experiment there is an accident and Victor is seriously injured. Comical foreign government agents claim that von Doom has died and smuggle his body out of the country, back to his home: Latveria.

During their time in college, Reed and Ben live in a boarding house owned and run by Mrs. Storm. The Storm children, little Johnny and pre-teen Sue (played by Mercedes McNabb, who many readers might recognize as Harmony in both Buffy the Vampire Slayer and Angel) live there as well, and Sue has a childhood crush on the 'dreamy' Reed.

Approximately 10 years later, the comet is returning and Reed, at Ben's urging, recruits Sue and Johnny to go up in an experimental spacecraft to complete the failed experiment that cost Victor his life. There is, of course, another mishap and the crew is bombarded with cosmic rays. Upon crash landing back on earth, they find that they've each developed bizarre powers.

While this may not be the comic's version of the characters to the letter, there is at least the attempt made to stay true to the spirit of the comics. The shared pasts and the age differences, as in the comics, provide a relationship structure that plays into the original conceptions of the characters; i.e. Reed's fatherly status, Ben's protective uncle role, Sue's romantic idealizing of Reed, and Johnny's immaturity. And, as with the 1991 Captain America film, while the dialogue isn't great there's something exciting about seeing the story play out at least close to the way we've read for 40 years.

Of course for every good thing about the film, there are more than enough bad things to drag it down. The reason for the experiment's failure the second time is due to the introduction of an original character, The Jeweler (Ian Trigger), who is, for reasons I can't fathom, made up to look like The Leprechaun.

Doom's costume is an almost perfect recreation of the comic character (as are the FF's costumes, especially Ben's) and is one of the things that I love about the film overall. But with the lack of a budget, extremely under-imagined set and technology designs, and the lack of any noticeable directorial style, the end result is a bit jarring. The imagination that went into the character's look isn't reflected in the rest of the film in any way, especially in Doom's own grand plan for destroying New York.

If there's a motivation for the attempt, it was so slight that I can't tell you what it was. Doom needed the diamond to power his super laser, you see, that when fired into the sky in Latveria, will somehow (contrary to physics) curve around and arch downward at New York, destroying the city in some unexplained manner. You know, because he's a bad guy.

The FF's responses to the nonsensical threat are equally ridiculous. Johnny flames on and is somehow able to chase the laser beam (which travels at the speed of light, remember) across Europe and across the ocean, catching up in time to get in front and blast it with his flames. All of this is presented in an animated sequence, thanks to the lack of a budget.

Along the way, there's also a kidnapping plot involving Alicia that, as with the fight choreography, seems as if it was written by a child or at least with no real thought as to who the audience might be. In fact, I'd say that this is part of the reason the film ultimately fails: it seems to, as an afterthought, have been made for children, or at least written as though the audience would be satisfied with childish motivations and relationships. As a children's film, one might give it more leeway, but even then it's still not imaginative enough to really appeal to that audience and is rather boring at times. As a film for adults, it's kind of insulting to its proposed audience.

The film ends with Reed and Sue's marriage and as the wedded couple drives away, a long, bendy, fake arm is stuck out the sun roof of their car as Reed waves goodbye to everyone. Frankly, it's embarrassing.

I find it hard to believe that anyone working on this film and seeing the dailies could have been surprised when it was shelved instead of being released. But for all its faults, there is still a sense of fun about it that is hard to ignore. Particularly when we take the fact that this was woefully underfunded (going from a proposed 40 million dollar budget to an actual working budget of 1.4 million) and that all principal photography was wrapped in 25 days.

For what it is, it is still watchable, and as mentioned above, with the proper attitude going in, is somewhat enjoyable. It's nowhere near as visually interesting as The Punisher (1989), or competently written and performed as Captain America (1991), but it's on par with the earlier TV productions of Spider-Man, Doctor Strange and Captain America.

After 17 years of trying, the original Incredible Hulk TV movie was still the most successful on both a creative and a critical level.

As an afterthought, I suppose I should mention that there was a pilot filmed for a live-action Power Pack TV show. It was intended for NBC's Saturday children's programming, but wasn't picked up. It is difficult to find a copy of this pilot, although you can watch it on YouTube if you like. I tried, and could only make it 4 minutes in before giving up. Since it's only a half-hour, I don't feel it's necessary to include it in flow of these articles.