Marvel In The 90's: GENERATION X 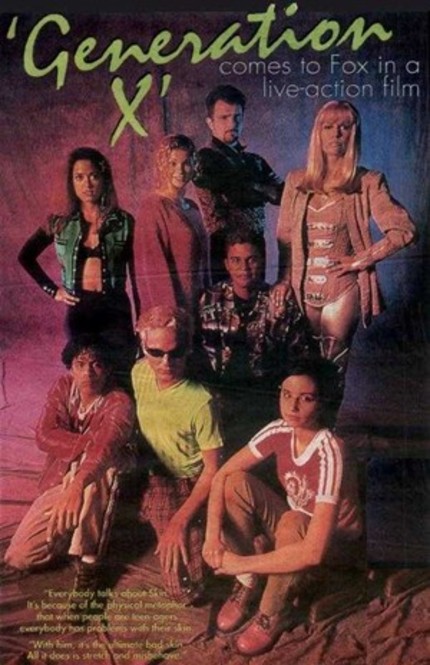 
Let's face it. After Howard the Duck failed on a spectacular level, The Punisher went straight to video, Captain America barely grossed 10 million worldwide, and The Fantastic Four never even made it to release, Marvel Movies were at a low point.

In a shrewd tactical move, Marvel shifted their focus back to television films, where they'd had their most success. Spider-Man and The Incredible Hulk were still fondly remembered, with the Hulk TV movies garnering decent ratings even if they didn't succeed as the backdoor pilots they were intended to be.

On February 20, 1996, Fox Television premiered Generation X, based on the comic by Scott Lobdell and Chris Bachalo. Like the source material, the Generation X team was mentored by Sean Cassidy (Jeremy Ratchford, who had provided the voice for Banshee in the X-Men cartoon from the early Nineties) and Emma Frost (Finola Hughes).

The characters Skin (Agustin Rodriguez), M (Amarilis), Mondo (Bumper Robinson), and Jubilee (Heather McComb), were translated directly from the comic (although Jubilee was no longer Chinese-American, as the character was originally supposed to be Dazzler, but was changed at the last minute due to Jubilee's popularity in the comics), with new characters, Refrax (Randall Slavin) and Buff (Suzanne Davis) added to avoid the effects budget needed to incorporate more of the original cast.

The villain of the piece was played with scenery-chewing abandon by Matt Frewer (Max Headroom, Lawnmower Man 2, Dawn of the Dead, Eureka), who seemed to be doing his best to capture the same energy that Jim Carrey had brought to The Riddler in Batman Forever. It would be both a good and a bad thing for the production.

The film was written by Eric Blakeney, a ten year veteran of television writing for series such as Crime Story, Wiseguy, and 21 Jump Street. It was directed by Jack Sholder, the man responsible for the lamentable A Nightmare on Elm Street 2: Freddy's Revenge and the gloriously fantastic The Hidden.

This film actually has just about everything one could ask for when setting up a television series, but they seem to hold back too much to really engage with the audience.

When all is said and done, Generation X is nowhere near as bad as voices on the Internet would have you believe. It's much like all the other Marvel films so far. It's not that good, but it's not that bad. With a creative team that had a distinctive vision for the project, along with the budget to realize that vision, it could have been something special. But, as with Return of the Incredible Hulk and Trial of the Incredible Hulk, there just wasn't enough thought put into how to make the Marvel Universe believable on-screen.

Generation X works as well as it does, mainly because the filmmakers knew that they didn't have the budget or the technology to really stretch the viewers' believability. None of the characters' powers have anything to do with anything. They may as well not even have them. Frewer's character exhibits the most dynamic use of special abilities, which makes him as central a character as the students.

The powers are there, essentially, to just make them all feel like outcasts. Only their mentors, Banshee and the White Queen, actually have powers that are proactive in any sense of the word (in the context of the story - one assumes that they would learn to use their powers offensively as the series went on). This serves to alienate the audience that would naturally be looking forward to the film and provides nothing tangible enough for an audience that was just dipping their toes in the water experimentally.

That's really where it fails.

But looking at it objectively, or as objectively as possible, there was enough enjoyable to make me feel sad that it wasn't picked up as a series. Given a commitment to a season's worth of hour-long episodes, Generation X could have really come into its own.

For example, this is a world where mutants are widespread enough and public anxiety about them is high enough, that the Mutant Registration Act has been passed. There is a government agency entirely devoted to policing mutants and if you're not registered you are shipped off to Mutant Camps for "assimilation". Xavier's School for Gifted Youngsters is, as in the original comics, a secret from the general populace. Only the students and some of their families really know what's going on there.

Another example is that in this world, as in the comics, Emma Frost had an earlier team of young mutants called The Hellions. They were all killed somehow, and Emma feels responsible. She's training Generation X because she feels that if she had done a better job with The Hellions, they might still be alive. This is only barely mentioned in an aside, but it begins to lay groundwork for promised character exploration to come.

Also, while Matt Frewer was decidedly over-the-top in his performance, his character, Russel Tresh, was both interesting and threatening. Not only is he a technological genius, he wants to cut open a mutant brain and inject himself with parts of it, so he can mutate and access the Dream Dimension at will, as he assumes all mutants can already do. It's a great combination of paranoia and self-aggrandizing. And if he doesn't get his way, he threatens to mind-rape a child!

The Dream Dimension itself is something worth exploring, too. Taking into consideration the budgetary constraints, there's an interesting idea here that borrows heavily from the imagery of Hellraiser II: Hellbound. Unfortunately, having no money means that all we really get is a mat painting or two, some swirly computer effects, and bad green-screen work. But the idea is solid. The idea, I like.

The way that Emma manipulates minds to make them see and think what she wants is another interesting element, and a decidedly gray moral area, that could use more exploration. She makes a nice contrast to the sort of leader one would normally expect to see in this sort of role. Sure, that comes with the source material, but on TV it should have been fresh. With more money and talent behind the scenes, it could have been.

All of the actors do the best they can with the script they were given. And the script is functional. It does what it sets out to do and doesn't try to overreach. Even Ratchford's painful Irish accent grows on you after a while, and hell, he provides a geeky connection to the X-Men on television, which for me, gives him enough cred to let the accent slide. If it was good enough for the X-Men cartoon series, I'll accept it here.

Especially since the chemistry between Ratchford and Hughes as Cassidy and Emma is decent. They banter and snipe back and forth with a casual familiarity that should only get better if given the time to explore their relationship.

When all is said and done and the credits started to roll, I wanted to see more. And that's what this film was supposed to do.