Marvel In The 80's: THE PUNISHER 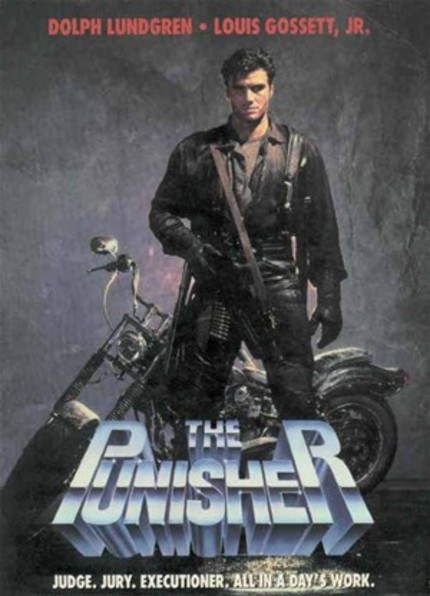 After the failure to launch either a Thor or Daredevil TV series, in 1989 Marvel came out swinging once more. The late-Eighties was a strange time at Marvel Comics, with a bizarre mix of overly gritty super hero remixes and outlandish concepts that are still hard to take seriously. There were some gems released during that time, though. And this was the beginning of what would become a frenzy of activity for an unlikely superstar: Frank Castle, The Punisher.

The character had been around since the Seventies, and had begun as a riff on Mack Bolan, The Executioner and the film Death Wish (1974). Death Wish spawned a number of sequels throughout the Eighties and it's these films, along with the Dirty Harry films, that really establish the tone of what the 1989 Punisher film tries to accomplish.

If only they had an actor of Charles Bronson's or Clint Eastwood's quality.

Instead, the gigantic Swede, Dolph Lundgren, was tapped for the title role. The rest of the main cast is more experienced and does a serviceable job making Lundgren look as good as possible.

Louis Gossett, Jr. co-stars as Frank's old partner, police officer Jake Berkowitz, and as usual, he delivers a likeable and solid performance. Kim Miyori plays Lady Tanaka, the leader of the Yakuza and the second most dangerous villain in the film (followed only by her adopted American daughter, played by Zoshka Mizak). Her character is one of the bright spots in this film.

The screenplay was written by Boaz Yakin, a first-time screenwriter who went on to write a couple of decent films over the years, and the initial script (which can be found online with some diligent searching) isn't bad. However, there were some apparent conflicts with producer Robert Kamen which, according to rumor, led to Yakin being fired and the script being rewritten. This meant that some elements directly inspired by the comics were removed, like the skull on Frank's chest. According to other sources, the producers only had a "limited license" which restricted how close they could make it to the source materials.

It doesn't really matter one way or the other, though.

What made a Marvel Movie work was how the spirit of the character was interpreted on the screen. That's what made most of the television films at least somewhat successful despite obvious budgetary and talent limitations. That's also where this film really shines.

For the director, the producers gave veteran film-editor Mark Goldblatt a shot. This seems like a no-brainer, really. Goldblatt had edited The Howling and The Terminator. Without question, the man knows how to cut a film. He went on to edit Rambo: First Blood Part II, Terminator 2, Starship Troopers, and more. Unfortunately, his skills as an editor didn't really translate into directorial abilities.

So when we combine a new director, a re-written script, and a weak lead actor, we get a fairly disappointing comics-to-film adaptation. Although, I would argue that in retrospect, this film really is the forerunner to the highly successful Blade (1998).

For instance, The Punisher doesn't mess around with lightening the tone, and instead goes for an "R" rating. There's nothing sanitized about this version of the character. The cheesy opening credits sequence sets the stage. We get images of sleaze and corruption balanced out by shots of Lundgren firing his huge machine gun. There's your film, right there.

All in all, over 100 people are killed in this film. It's a blood-bath. Which is exactly what a Punisher film should be. In fact, the quality of this film is on par with the majority of low-budget action films of the time.

Plus, in contrast to the other Marvel productions so far, this first appearance of Frank is not an origin story at all.

Frank has been killing mobsters for five years when the film opens, 125 murders in five years, to be exact, and the mob boss, Dino Moretti, the man responsible for the death of Frank's family has just been acquitted and set free. Frank kills him quickly, along with a house full of bodyguards, and we're off.

After five years of Punisher action, all of the gang bosses are weak, and the new boss, Gianni Franco has a plan for teaming up and consolidating their strength. Unfortunately, he's not the only one realizing that the bosses are weak, as on the night of the arrival of their first huge drug shipment, The Yakuza show up, kill everyone, and steal the drugs.

Franco and the Mob Bosses are clearly bad guys, but the Yakuza show up and Lady Tanaka is more evil than anyone in the room. There's a nice shift in tone, where the Mobsters actually seem a little more like cartoons compared to the ruthlessness of the Yakuza.

But even though it's not an objectively good film, in the context of its genre it's a perfect satisfactory accomplishment. But that genre is not the comic book film. The genre is revenge thriller.

And that's what The Punisher should be. There are no over-stylized set designs. There's really not much in the film that tries to move out of the gritty and brutal company of Death Wish and Dirty Harry. In fact, if they could have afforded a director like Don Siegel or even Michael Winner, this could have been turned around pretty easily.

A better actor as Frank wouldn't have hurt, either, though.

This is nowhere more apparent than at the conclusion of the film.

Frank has been forced to team-up with Franco to rescue Franco's son from Lady Tanaka and her daughter. And in the course of getting into the Yakuza headquarters, we get my favorite scene of the film.

Frank and Franco step off of the elevator and are confronted by a roomful of Yakuza henchmen in their full Kendo outfits. The Yakuza begin to attack. Frank and Franco raise their machine guns and mow them all down. All of them. The scene seems to go on for minutes, ending only when an entire roomful of people are dead.

That's the freaking Punisher, right there.

We also have a very physical and brutal fight between Frank and Tanaka's daughter. There are no quips and no exaggerated styles. You can really believe that she's trying to kill him, and finally, in order to win, he ends up throttling her while she tries to slice him up with the blades imbedded in her shoes. Then he snaps her neck.

It's unsettling and effective. That's what a Punisher movie should aspire to.

Lady Tanaka is killed more efficiently, but just as disturbingly, in front of Franco and his son. Then we get the most brutal part. Frank is hurt so Franco turns on him. He ushers his son out of the room so he won't see, and then begins beating and kicking Frank in another realistic fight. Little Tommy busts back in and tries to stop his father from killing the scary man who saved his life, only to watch his father get shot dead.

The boy grabs the gun and points it at Frank, saying, "I'm gonna kill you!"

And this is the moment when Lundgren actually puts something effective into his performance. He turns to Tommy and says, "Good. Maybe if you get it over with now, you won't grow up to be like him." He then gets down on his knees in front of Tommy, pulls the gun up so it's aimed at his own forehead and begins urging the boy to pull the trigger.

Tommy breaks down crying and Frank stands up to leave. But before he goes, he says, "You're a good boy, Tommy. Grow up to be a good man. Because if you're not... I'll be waiting."

And then he disappears into the night, having seriously messed this kid up for life. Which is exactly what the Punisher would do.

As it is, it's an effective revenge film that fits securely into the late-Eighties vigilante-action genre. Like many of those films, it is marred by poor direction, a lack of money, and uneven acting. Unlike all of the Marvel Movies up to this point, it doesn't try to undermine its material by trying to appeal to a broader audience. This film makes no apologies and earns its "R" rating.

Unfortunately, quality concerns paired with the fact that Tim Burton's Batman was the blockbuster event of that summer, as well as the financial difficulties of distributor New World, relegated this film to a European release with a direct-to-video release in the States.