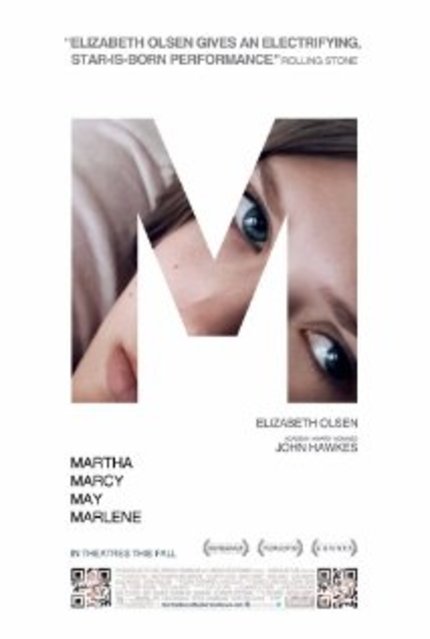 In a movie year that's also giving us the high profile "Tinker Tailor Soldier Spy", it takes some guts to hit us with another easily jumbled four-word mouthful of a title. But that's just the kind of film this is. It's an unrelentingly bold movie, but bold in an under the radar sense. It's a work on a small scale but deep in murky complexity. And it's dark. Dark like Virginia Woolf, or a Nick Cave album.
Elizabeth Olsen gives one of the year's breakout performances as the young girl of the title. After living a radical life apart from society on a farm with a group of self-sustaining misfits, she flees to the contemporary sanctuary of her affluent sister Lucy (Sarah Paulson), her only remaining family. Essentially she goes from a world of systemic evil into a void of modernist apathy, and the film dares to ask us which is worse.

John Hawkes, never turning up in comfortable projects, embodies evil as the leader of the cultic crew we experience in flashbacks. His vainy arms and greasy hair serve to visually reinforce his sugarcoated lies and manipulations. It is his presence that completes this methodical, low budget indie position as this year's "Winter's Bone". (As far as such comparisons go, that's not at all a bad one.)

Unease and lack of hope are chronic here. The overwhelming use of visual gloom is palpable, almost tangible. The framing is consistently, deliberately off-kilter, sometimes opting to relegate our protagonist's head to postage stamp size amid a sea of upper classy interior decoration. Sometimes, she simply sits alone, drifting from one waking nightmare and into another, framed up by out of focus doorways and bunches of pillows. Near the end, she seeks to be refreshed in the waters of the country lake, but the water itself appears black, black as ink. Poor Martha Marcy May Marlene.

This is a girl saddled with four first names, but she might as well have none. Her deep inner turmoil is lost on Lucy, a realistically selfish individual who's relief at Martha's recovery is most rooted in the fact that now she can stop worrying about her. It requires contemplation on the part of the viewer to arrive at just what it is about Lucy that is so bothersome amid her everywoman relatability. The fact that she is, for so many of us, some kind of a mirror to our comfort-induced self-centeredness is truly unsettling on a gut level. Paulson pulls off this deceptively delicate supporting role with brash precision, with a great assist by Hugh Dancy, who plays her increasingly frustrated upperly mobile husband Ted. The love and hate of the sisters swirls round and round as vacation is derailed and lifestyle is questioned.

Darker than South Korea's "The Housemaid" or von Trier's "Melancholia", "Martha Marcy May Marlene" is the bleakest film I've seen this year. It is competent and gutsy, with the benefit of a solid career-launching turn by Olson. Ditto that for the film's writer/director Sean Durkin. Both Olsen and Durkin have earned our attention as we now wait to see what else they have in store for the future.

The fact that Martha has four first names is explained in due time, although blatant explanation of most anything else is not in the film's interest. This is to its credit, as the shady secrets of "Martha Marcy May Marlene" are intentionally murky and non-linear, something that is all at once wholly cinematic and reflective of real life. That is the success and boldness of this deceptively precise slice of shadow, which is one of the year's most notable.