Contest: Win One of Three DVD Copies of MARTHA MARCY MAY MARLENE 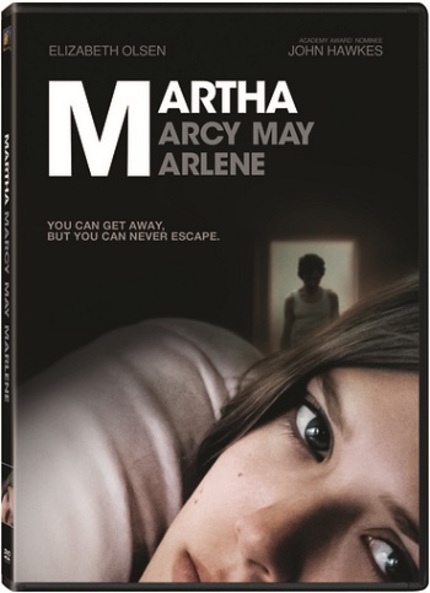 Here's the synopsis for the much talked about film:

After escaping from a dangerous cult and the watchful eye of its charismatic leader, a young woman named Martha (Olsen) tries to reclaim a normal life with her family. But the haunting memories from Martha's past trigger a chilling paranoia -- and nowhere seems safe as the fragile line between her reality and delusions begin to blur.

Supported by unforgettable powerhouse performances from Academy Award® nominee John Hawkes (Winter's Bone, American Gangster) and Sarah Paulson (Down With Love, What Women Want), the MARTHA MARCY MARY MARLENE Blu-ray and DVD is rich with feature special features, including "Mary Last Seen," the chilling short film by writer/director Durkin that started it all.

To win a copy, simply e-mail me by Sunday at 11:59 PM PST with Martha Marcy May Marlene DVD in the subject line (I'll totally ignore any without the full, crazy-long title). Sorry, since this is being handled by a North America-based PR company, this giveaway is only available to readers in the U.S. and Canada.

Martha Marcy May Marlene is available on DVD, Blu-ray, and VOD now.