Blu-ray Review: The Enigma of MARTHA MARCY MAY MARLENE 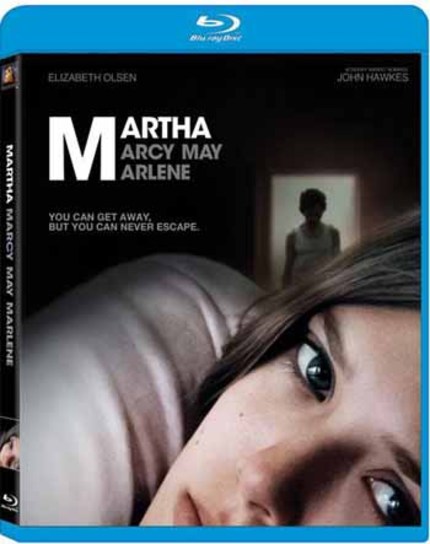 My inner crank--the part of me that wants to write angry letters to the utility companies about the electric bill being too damned high, perhaps--is unable to concede that beyond its across-the-board fine performances and taut direction, Sean Durkin's Martha Marcy May Marlene doesn't really amount to a whole lot. Okay, even as I was typing that out, I realize what an ass that makes me sound like (and willfully obtuse, to boot), but allow me, if you will, to explain why I had trouble connecting with this particular well-made film.

Martha Marcy... concerns itself with Martha (Elizabeth Olsen) and her flight from an upstate New York cult to the presumed security in the home of her estranged older sister Lucy (Sarah Paulson). Martha, renamed "Marcy May" by charismatic cult leader Patrick (John Hawkes), quickly finds that its hard to shake her time with "the family" out of her mind as she alternates between trouble acclimating to life outside of the confines and control of the cult, allowing the movie to move deftly between the present and flashbacks to her time on the farm. Some bad things happened out there and Martha/Marcy May may have been responsible for some of them, and as the movie slowly reveals itself, we learn just what happened and why it might be a long time (if ever) before she's free.

Under the demands of the story, Olsen carries so much of the weight of Martha Marcy... on her shoulders, and there's a fine line she has to walk to communicate what's probably best described as PTSD, but in a less sure performance would have simply made her character seem like a space case. In the present day sequences, the role requires the appearance of distraction, constant anxiety, and flashes of anger. In the past, we have to see and trust that there was something in her that allowed Patrick to work his will over her mind and make her do things she probably would not have otherwise. This last part's a little trickier, because we never get to know Marcy before the farm, and have to take Patrick's sway on faith to a certain extent.

And let's consider Patrick: he talks in a constant, soothing monotone (I don't think he raises his voice once in the film), and speaks almost entirely in platitudes ("You're a teacher and a leader..."). We know that a methodical process of isolation, food and sleep deprivation, and indoctrination are the centruries-old keys to putting a person under the sway of a cult, and we get flashes of that. Unfortunately, I had trouble buying Patrick as anything but a dangerous creep from the beginning (I think this might have been the beginning of my disconnect with Martha Marcy...): the very first time Patrick meets Martha, he says something fairly personal about her and her relationship with her family, fairly early in Martha's time on the farm. As a general rule, I don't think most of us like being told anything deeply personal about ourselves by strangers, and we typically reserve a positive reaction to this kind of knowing sentiment from so-called mystics and psychics.

What I'm getting at here is, because of the intensity of Hakwes' performance, I was lost early on in Martha Marcy...'s running time, unable to connect with a character who was taken in by an obviously malevolent, possibly mentally diseased being. That, and who in their right mind allows themselves to be taken up to a farm among a bunch of unwashed (yet attractive), vaguely spaced-out hippie types where the women aren't allowed all that much in the way of personal autonomy and the men are all, at best, kind of rape-y.

And yet, I stand by my initial assessment that Martha Marcy May Marlene is a well-made movie, and not simply from a technical standpoint (although Durkin's should be commended for knowing how to get a pretty picture). Olsen is impossible not to watch here and everything good thing you've heard about the role so far is true. Ditto Sarah Paulson, who buries years of judgement under her protestations that she's worried about her little sister. She sees Martha as a problem that needs to be fixed and managed so that it can fit into her life and the fraught relationship between the two are some of the film's best scenes. There are more obviously thrilling scenes later in the movie that reveal the true poison at the heart of the family on the farm, and these are very effective and make a convincing case for Martha's escape.

If it's not clear, I'm (mostly) putting the disconnect between myself and Durkin's film on my own shoulders: one seen undid the experience for me to a certain extent, making it hard to connect with the rest of the film. Still, there's no diminishing everything else that's on the screen before and after and I can promise that Martha Marcy May Marlene is a movie I'll have to revisit in the future.

There's more than enough here on this gorgeously reproduced disc to give you background and context on Martha Marcy May Marlene, should that be the kind of thing you're looking for after watching it, with six features, Durkin's "Mary Last Scene" short which serves as a kind of prequel to the feature, and really only lacks the original theatrical trailer to round out the total package.

Martha Marcy May Marlene is available now on DVD, Blu-ray, and VOD.