Toronto After Dark 2011: THE WOMAN Review 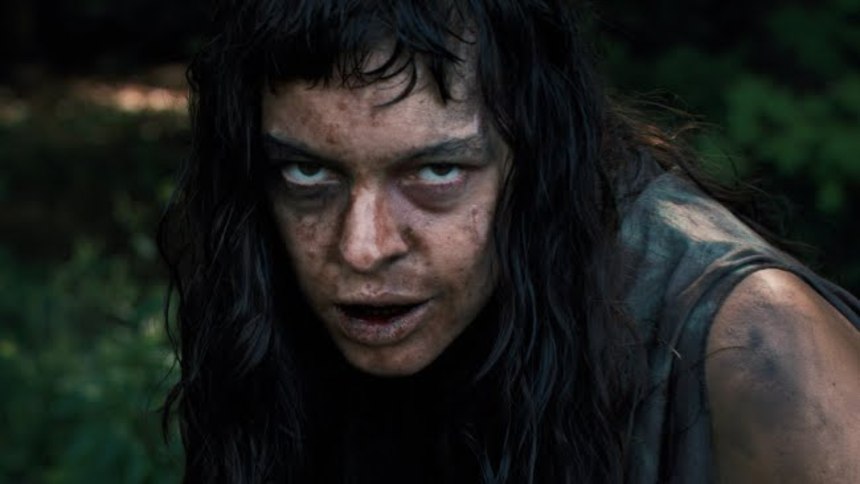 After watching a movie that takes place in such a strange headspace such as Lucky McKee's The Woman, it is probably best to let the thing percolate a bit before even attempting to articulate a reaction.  The prime example of this visceral reaction is a youtube video that went around Sundance after the films premiere featuring a guy who wanted the film destroyed from existence.  *Deep Breath*  Here goes. The Woman boldly defies any attempts to slot it into any sort of easy niche. It is simultaneously a blunt gender provocation, a deadpan satire and a gory torture movie. I suppose if a filmmaker elicits a visceral reaction in your audience, you have made a successful horror picture, but I am not sure that the film has anything new or interesting to say, and I am not exactly enamoured with how it goes about saying it. There are a fair number of of leaps and contortions to be made to get into the the film. You not only have to swallow that there is a super-psychotic family that is well integrated into the polite rural society of back-yard BBQs and supermarket chit-chat, but also that there is a feral woman who has lived her life out in the back forty thus far unnoticed. But let us proceed with an open mind, nevertheless.

Apparently, there is another whole film dedicated to these undetected cannibal predators, called The Offspring (2009) also written Jack Ketchum (co-author here) and directed by the producer of The Women, Andrew van den Houten. One member of this clan, a woman, albeit it is hard to tell with all the shit and grim she is caked in, wanders into the opening frame looking to find shelter. She settles on a wolf-den after tangling violently with the home-owner. Things are all rather stylized and surreal, like a native American movie or one of the early films of Larry Fessenden. After this scene, the rest of the picture, with its flattish rather ugly digital cinematography is not. Pollyanna McIntosh plays the eponymous Woman, although one might argue that the title might better benefit the loss of "The" if it going for a universal something or other. If you look her face up on the IMDb or Google, she is a sharp looking, sexy gal, but here she turns in a performance of wild grunts and snarls and teeth-baring menace. Much like her character, the actress is bloody fearless. She is nearly matched in the ferocious acting department by Sean Bridgers, an actor familiar to fans of Deadwood as the slow but rather empathic bartender/henchman Johnnie Burns. Here he is anything but empathic, as a local attorney at law and abusive patriarch, Chris Cleek. He spys the feral creature while on a hunting sojourn and captures her to kick-off an ambiguous family project: Keeping the newly captured wild-woman chained in the barn cellar in an act to civilize her? Break her spirit? She gets an early victory on her captor when she chews off his ring finger, and gleefully spits out his wedding band. This is the films best sequence, as it has the director laying down his cards and his agenda on the table quite clearly.

As the story goes, Cleek is more the focus his captive new pet, or in their own way, his captive family. The man is introduced in a jovial fashion with sinister undertones; both subtly bilking a family friend out of the profits in selling her home and casually flirting a bit too far with the office secretary at his small town law-practice. Outside the eyes of the community he is a misogynist of the first order, who smacks his wife (Angela Bettis) around -hard- if she even slightly questions his actions which vary from authoritarian to mysterious. He has cowed his eldest daughter, Peggy (Lauren Ashley Carter) into a state of wilting introversion with only a resigned, yet still slightly incredulous reaction to her situation. He is raising his son Brian (Zach Rand) to be a chip off the old block, as in a sadistic bully just like his old man. And his youngest daughter, Darlin' (Shyla Molhusen) who is about six or so, seems oblivious to the family dynamic. Perhaps the most disturbing thing is that Darlin' has no questions about an animal-woman locked up in the barn - kids, they taken things in stride* - and this behaviour appears 'normal' to this nuclear American family. The film, as one might expect, has the presence of this new woman in the cellar completely re-arrange the Cleek family dynamic. Since everyone is either a monster or a victim, it is hard to evaluate them as people, so McKee injects another character, Peggy's teacher, Genevieve (Carlee Baker) who is concerned because Peggy's marks are falling into the dumps. Peggy's constant trips to the bathroom with nausea and her increasingly baggy clothes seal the deal. Genevieve's empathic (and perhaps a little pious) entrance into the Cleek clan, with her errand of concern, kicks off the the chaotic finale that has been building for some time as the precarious homestead finally destabilizes.

McKee's 2002 cult-hit May walked the line between fable and reality better such that when that film decided throw up horrific bit of brutality up on screen (one of many standout sequences involves a room of blind children on their hands and knees feeling their way across a floor littered of broken glass, for instance) it had more of an immediate effect of horror than what is on display here, which is more along the lines of the viewer slowly but inevitably sinking into the midden heap of the worst human nature has to offer. The Woman is a grim experience, and incongruously upbeat rock-and-twang soundtrack suggest satire (or to be less kind, fanboy anticipation) culminates to limited insight yet carries an air of didacticism nonetheless. It provokes, but to what end? It might have self-serious feminist bent, but it also wallows in splattery genre-gore and no shortage of conscious cruelty. It makes one wonder what a film of this sort would have been if it were written by actual women instead of two fellahs. Insights towards women and men gathered here say as much about the tellers as the subject, there seems to be need to rub our noses in things the way you teach a dog who is shitting on the carpet. Somehow, Michael Haneke avoided this trap (with me personally anyway) with either of his versions of Funny Games, but here this tone rub me the wrong way. And, before the dander of one set of folks or another gets up, I am not saying that McKee is a misogynist, far from it in fact, the film is much more aggressively critical of the XY set than double XX. It seems to hate the entire species or at least our cultivated veneer of modern civilized society. The film wants you to 'think' but gives you few tools outside of the pure exploitation filmmaking. Certainly less than the provocations of Lars Von Trier, Sam Peckinpah's Straw Dogs or even Wes Craven's Last House on The Left. The more I think about it, those examples see people pushed to a sense of animal violence deep within by external forces. Chris Cleek and his captive are already long gone prior to the first frame. Thus, for all its bluntness, The Woman as a film is as much of an enigma, to this particular viewer, as the so-called 'fairer sex' is to this particular man! Whether this is an accident or intentional is up to each audience member to decide on their own. That is, if they can pull themselves out of the ugly place that this film takes them.

*Epilogue: To further muddy the waters, it seems that McKee and company have tacked on a post-credit bonus short that features Darlin' in her own animated version of Where The Wild Things Are. There is more dark whimsy in this little sequence than the rest of the film, and helps cleanse the palette, if only just a little.