Grimm Up North 2011: THE WOMAN review 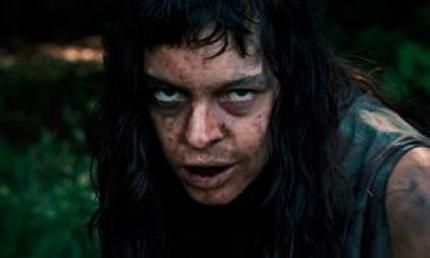 What you get out of Lucky McKee's The Woman, a piece of ultraviolent drama that's brilliant and infuriating by turns, is probably dependent on how serious you think the director and his writing partner, novelist Jack Ketchum are being. The story of a man who discovers a feral woman living in the forest behind his house, captures her and locks her up in his basement so his wife and children can help civilise her, is The Woman some kind of demented backwoods exploitation fantasy? Feminist empowerment, misguided or otherwise? A joke at the audience's expense? All of the above? More? McKee doesn't deserve some of the hate he's drawn for the film, that much is clear - The Woman is technically slick, polished cinema with some terrific, even astonishing performances and is frequently gripping stuff whether it's revelling in splatter or just letting the promise of violence roil and simmer beneath the surface. But it doesn't successfully capitalise on its premise, with characters who waver between fully realised individuals and flat-out ciphers, plot developments that teeter on the edge of saying something profound then just stick two fingers up at the audience and a general sense whether they're serious or not, McKee and Ketchum haven't quite thought things through. The Woman is definitely worth a watch, but as much for the sense you're watching a child get away with something naughty as you're seeing a maverick deliver a bold statement.

Sean Bridgers plays Chris, the patriarch of the Cleeks. He seems like a decent guy, at least briefly, to start with as he, his wife Belle (Angela Bettis) and three kids socialise at a local garden party. But it's obvious Chris is the wily, assertive sort, radiating alpha-male confidence as he promises their host he'll use his business connections to secure her a comfortable retirement. Similarly, each of the family gets a brief introduction to whatever issue keeps them under Chris's thrall. Belle's quiet and reticent; the younger daughter's still just a child, easily led; the older still worries about the last boy she dated, and the son seems given to brooding over his teenage urges to a worrying degree. But it quickly becomes apparent Chris's influence as the head of the family unit is a lot darker and more disturbing than the introduction hinted. When he goes hunting in the woods and happens across a woman (Pollyanna McKintosh) living wild only a short distance from their home, he decides to capture and forcibly incarcerate her. Not only that, he means to have his family help him turn this snarling, animal thing back into a regular human being. Which they're willing to do, to begin with, but it becomes clear the family's new house guest and Chris's obsession with her is re-opening old wounds the other four have been suppressing for far too long, and something's got to give.

This is familiar territory for Ketchum, whose The Girl Next Door (also filmed) also explored similar themes of darkness lurking under the skin of affable Americana. Credit where it's due: there are definitely subtexts at work here. The Girl Next Door played with the idea of civilising an outcast, with a supposed icon of moral probity gone completely off the rails in the process but Ketchum seemed far too intent (in the novel, at least) on detailing horrifying savagery for the hell of it and never really accomplished anything countless exploitation flicks hadn't already tried. The Woman does at least suggest it might be taking a more structured approach, with the cast touching on different aspects of masculinity and femininity - the good wife, the daughter with a secret, the son as apt pupil. McKee and Ketchum's script does skirt frustratingly close to maiden, madonna and whore but there's real meat in it, too. Bridgers is utterly riveting as Chris, monstrously cocksure but never completely a cartoon. The moment where he openly strikes Belle for the first time is partly a shock for how grounded in reality it feels, and their confrontation when their son's interest in the woman reaches a sickening climax is gut-churning stuff. Too much of the melodrama rings true to be able to dismiss the film as nonsense, for all the premise is so leeringly fantastical.

But it is plainly fantastical, from the moment Sean Spillane's pounding score introduces Mackintosh, looking like something part way between a rock video and a catwalk model. Obviously this is partly the point - McKee and Ketchum want us to see the woman as object of desire - and the film does pull this off to some extent. With a different cast the way the script inevitably develops could have played out as hysterical, blood-spattered camp, yet McKintosh seems to have a fairly realistic view of her role as an archetype as much as a person. When Chris's son takes his father's obsession as a sign he's got carte blanche to do whatever he wants with their guest you know the woman's dangerous, but you can't help feeling both horror at and empathy for her suffering. Still, McKee can't quite balance symbolism and myth-making with writing a tight three-act drama that ostensibly takes place in the real world. Yes, people very similar to Chris do exist, but despite Bridgers' skill in bringing the man to life you can never quite see what persuaded Belle to marry him, let alone get trapped by him. He's a compelling sociopath, but so obviously, completely unhinged (remember, he's chained a woman up in his basement) you can never quite shake the impression one of the family would have ratted him out long before this. The final showdown tries to justify all this, but the explanation gets somewhat lost among the flying body parts, to be honest.

Nonetheless this is still powerful, intelligent horror that's unlike almost anything else in the field. Yes, The Woman is nowhere near the shattering tour de force some of the early buzz suggested. There simply isn't enough detail or consistent character development to support the twisted little universe the film tries to create - not nearly enough explaining why its characters do what they do - and the filmmakers' attempts at keeping a knowing distance from their premise fall comically flat as often as they heighten the tension. But Lucky McKee and Jack Ketchum's script still has a raw, compelling savagery to it that's far more convincing than many similar attempts to detail what civilised people can sink to, if pushed, and the dangers of turning a blind eye to it all. It's worth noting that the final act's descent into dismemberment and slaughter largely feels very much earned. Various characters' decisions come back to haunt them in believable and emotive ways, plus despite the muddled attempt at cramming exposition into the last fifteen minutes the final image is a surreal, disturbing, yet oddly fitting coda. If it were a short story, you'd be hard pressed to articulate what the point was, but you'd definitely want to read it again. If you're after something you won't be able to forget easily, and you've got the stomach for the sheer off-kilter strangeness of it all, consider The Woman recommended.

(The Woman was screened as part of Manchester's horror film festival Grimm Up North 2011, which ran from 6th-9th October at the AMC cinema, Manchester, UK.)