Grimm Up North 2011: SOME GUY WHO KILLS PEOPLE review 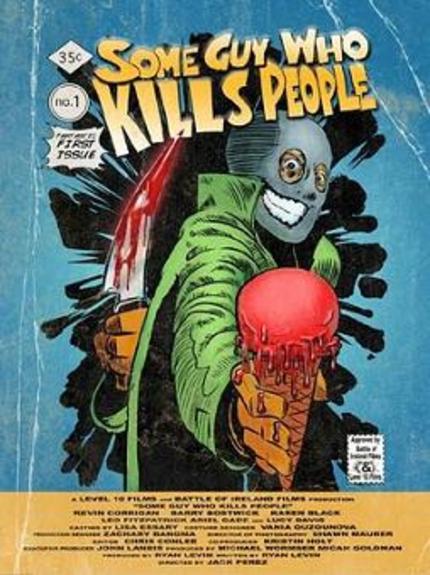 It's not the best title, is it? Trying to sell the excellent Some Guy Who Kills People is a lot harder than it ought to be when the name makes it sound like a slacker's Film Studies final year project submitted at the last minute. Hearing it's the next film from the director behind Mega Shark Versus Giant Octopus and Wild Things 2 is none too helpful, either. But despite the lack of any overt showmanship and the baggage that comes with that pedigree, Some Guy really is one to watch. An unlikely romantic comedy centring on some guy who, well, does seem to be notching up quite a few murders in a small American rural town, it's blackly, violently funny - yet also meltingly sweet and deeply, subtly moving, with a cast of veteran cult actors going the extra mile with a terrific script that does a great deal to cover up the workmanlike direction and low budget.

Kevin Corrigan plays Ken Boyd, a sad-sack man-child with a troubled past. Something of a geek as a young man, tormented for it by the town's high school jocks, he retaliated by creating a comic that satirised them so viciously they became laughing stocks. The jocks took a very physical, personal revenge so sadistic Ken had a breakdown and had to be committed. Now in his thirties, Ken lives with his mother Ruth (cult actress Karen Black), works a menial job at the local ice-cream parlour and spends his free time locked in his room doodling violent wish-fulfilment in which a shadowy figure hacks screaming victims to pieces. And it gets more incriminating - the surviving jocks have just started to turn up dead, lured to their deaths by a masked man who fits Ken's general description.

Ken seems happy to go along with all this, but then fate jams not one but two branches in the spokes of his wheel. First he catches the eye of Stephanie (Lucy Davis, from the UK version of The Office), a British ex-pat stuck in the States who seems oddly taken with the sullen loner standing in the corner looking ridiculous. Then it transpires Ken's sole whirlwind high school romance lasted long enough to get the girl in question pregnant. Not only that, but Amy (Ariel Gade), the child his high school fling gave birth to is now eleven years old, tired of her evangelical Christian foster-father and intent on tracking down her real dad. All of a sudden, it's almost as if Ken's got himself a shot at a relatively normal life, but how long will it be until his nocturnal adventures with power tools and dismemberment screw this up?

Some Guy takes a while to get into gear. The first few scenes appear a little too content to coast on genre tropes; we probably didn't need that much reinforcement that Ken seems to be a creepy loner obsessed with violent revenge fantasies, and shunned by the world at large. When your hero's painted as boiling over with murderous rage then explicitly mocked as worthless and incompetent by his own mother, it does create the unfortunate sensation we're due some kind of riff on Psycho any second now. Director Jack Perez is never less than competent, but neither takes the opportunity to cut loose and do something interesting with the camera nor gives any impression he really knows how to cover up the obvious lack of budget.

But once the opening exposition's out of the way, Ryan Levin's script settles on firmer ground and Some Guy abruptly starts to get a lot more interesting. It's partly the cast, all of whom have had at least some experience with cult or genre features and know precisely the spirit in which to take this one, and partly that Levin's writing is never less than a pleasure, peppered with some truly great lines and sparkling repartee. All of the cast shine - Lucy Davis seems a little awkward marooned among the Yankees, though Perez and Levin do a nice job of making her reticence seem appealing. Barry Bostwick in particular seems born to play the town sheriff, with the veteran character actor delivering every zinger he gets with near-perfect timing as he rocks a trembling silver coiff.

Yet keep watching and you slowly begin to realise that past the black comedy and slapstick violence, Some Guy is actually a very thoughtful film. Levin's script feels genuine empathy for his characters' pain, and the way this emerges is the audience's real reward - from Amy's innate goodness and desire to believe the best about her real father, to Ruth's love for her son, her desperate hope he'll actually respond to one of her clumsy jibes and go and be the person she knows he can be, to Ken's slow realisation other people are hurting just as badly as he is, if not more - and not only that, but the awareness he can do something about it. The back and forth between the three of them is simply terrific (Ariel Gale in particular deserves more work off the strength of this), easily the equal of any inspirational Hollywood rom-com of the past few years.

Some Guy is definitely a fair few notches short of perfect - quick and dirty, the visuals aren't much better than a SyFy exclusive, if that, and the story does take a little too long to get a proper hold on the viewer's attention, as if Ryan Levin wasn't quite sure how best to set up his idea. But it's far, far more than the cheap, disposable laugh it might first appear - darkly funny, but also subtle, witty and almost as heartfelt a look at a broken family trying to put itself back together as you could possibly hope for. If anything, the horror elements are almost a bar to getting this a wider, more mainstream audience... though it wouldn't be quite the same without them. Regardless, don't let that title put you off - Some Guy Who Kills People is a fantastic little gem for all it's ostensibly a lo-fi genre production, and horror or not, comes strongly recommended.

(Some Guy Who Kills People was screened as part of Manchester's horror film festival Grimm Up North 2011, which ran from 6th-9th October at the AMC cinema, Manchester, UK.)

Just saw this at Toronto After Dark today, and I completely agree with this review. This is a really magnificent script, and the actors all have razor sharp timing. Nearly every bit of comedy lands perfectly, particularly Karen Black and Brian Bostwick. Korrigan is fantastic giving a lead, he reminds me in style and line delivery of a young Alan Arkin (as in his Catch-22 days) and the actress who plays Corrigan's daughter out-Moretz's Chloe Moretz, topples Ellen Page in Super and beats the pants off the little girl in God Bless America - while she is still quite precocious, she is the most believable of the bunch.

Bravo for this movie and its unfortunate title, which I think aims to set up a straw-man situation where the writer can have a lot of fun upsetting expectations.