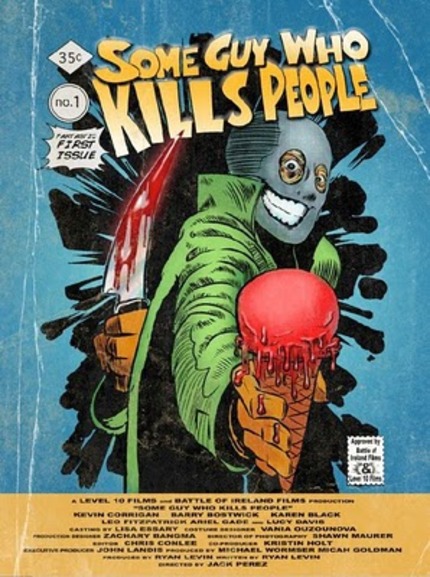 Ever had one of those festival moments when you walk blindly in to the theater, not really knowing what you are going to see but then walk out pleasantly surprised by the film you ended up seeing. I had one of those moments at the Lund Fantastik Filmfestival in Sweden this past weekend. The film was Some Guy Who Kills People, written by a guy who wrote a few episodes of Scrubs and directed by a guy who's last film was Mega Shark vs. Giant Octopus. Oy.

Kevin Corrigan plays Ken Boyd a former mental patient who works at an ice cream parlor and lives with his fairly disappointed mother, played by cult favorite Karen Black in a rare but effective comedic role. Ken is a self confessed loser with no ambitions and pretty much keeps to himself and draws morbid pictures in his sketchbook. The images he draws are fantasies of him murdering the high school bullies that tormented him as a teenager and are the reason that he ended up in a mental hospital. Coincidentally these same bullies are being slaughtered one by one by a masked killer. Coincidence?

Ken is clearly a troubled man but in a short period of time two women enter his life that turn it around. Firstly Stephanie an English woman who just moved in to town, played by Shaun of the Dead's Lucy Davis, and his 11 year old daughter Amy who he has never met. Both of these women attempt draw Ken out of his shell and turn his life around but the small matter of him possibly being a crazed serial killer that make things more complicated.

While clearly done on a low budget and plenty of favors it's the cast that's the real winner here. The comedic script is held up high by an assemble cast that delivers some very funny stuff here, Barry Bostwick and Eric Price especially as a clueless sheriff and deputy team investigating the gruesome murders.

Kevin Corrigan is one of those character actors that you've seen a million times but rarely does he get to be the lead in a film. Which is a shame cause here he's really good as the troubled Ken Boyd, wanting both to get out of his cocoon and join the rest of humanity and of course slaughter the bullies that ruined his life. The shining star here though is young Ariel Gade as Amy. Sure, her character is much smarter and mature than most 11 year old kids in real life but unlike, say the kid from Liar Liar for instance you don´t want to punch her constantly in her smug face and buzz cut that horrible bowl cut off her head. But I digress.

The script is fairly simple, the murder mystery not that deep and the resolution rather weak and convenient but with a cast so dedicated and good and clearly having a great time you really don't care. The direction is without much flair, allowing the actors to do their thing and the camera work is simple but it all works because of the strong cast. The most important thing here is the comic timing and all the actors deliver when called upon. So to use ice cream themed lingo it was a double scoop of gruesome delight.

Some Guy Who Kills People