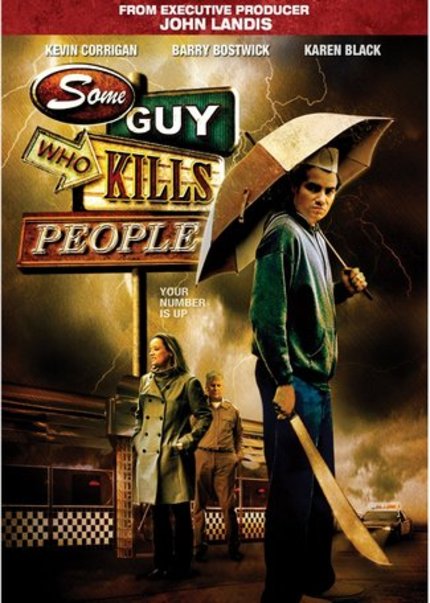 I really wish Some Guy Who Kills People had a different title. The obtusely laconic handle for this film does it no justice, and actually made me less eager to see it than I should've been. Of course, I don't know that I'd have been any more eager to see it if the title were more descriptive of the plot, either, on paper this film doesn't look promising. Some Guy Who Kills People sneaks up on you and gets you where it counts, right in the heart, where you least expect it.

Kevin Corrigan stars as Ken Boyd, a recently released mental patient working the day shift at an ice cream shop with horrible post traumatic stress disorder from a beating he survived at the hands of some high school classmates. When local douchebags start dropping like flies, it becomes apparent that a serial killer is on the loose in Ken's town. Ken's unrelentingly patronizing mother, played by Karen Black, is doin' it with the local police chief, Barry Bostwick, who is on the case like glue. All of the victims seem to be connected, but how, and how does Ken fit in if at all? What's up with Ken's eleven year old daughter who showed up out of the blue? WHAT DOES IT ALL MEAN??

For a film about a serial killer, Some Guy Who Kills People is pretty stingy with the gooey stuff, though when it shows up it is very fun. This is a film about more than simply a bunch of nameless assholes getting killed in increasingly brutal ways, it's about family. Ken's relationship with his mother is very hard to watch, even in the context of a comedy. She is condescending and shows no faith in him at all. His mysterious daughter becomes the light of his life, if there is such a thing, and helps him to understand what it means to be important to someone, and to be worthy of love. His romantic arc with Shaun of the Dead's Lucy Davis even evolves in a somewhat natural way, which is unusual for this kind of film. Jack Perez manages to squeeze more character work into this 90 minute slasher than most films that are considered infinitely more serious.

Granted, Some Guy looks more like an indie comedy than a horror film, but in the end, I was so swept up in the characters that any limitations fell outside my field of view. We've actually reviewed this film twice before, and, surprise, they both liked it. Matthew Lee had this to say when he reviewed the film at Grimm Up North last fall:

Some Guy is definitely a fair few notches short of perfect - quick and dirty, the visuals aren't much better than a SyFy exclusive, if that, and the story does take a little too long to get a proper hold on the viewer's attention, as if Ryan Levin wasn't quite sure how best to set up his idea. But it's far, far more than the cheap, disposable laugh it might first appear - darkly funny, but also subtle, witty and almost as heartfelt a look at a broken family trying to put itself back together as you could possibly hope for. If anything, the horror elements are almost a bar to getting this a wider, more mainstream audience... though it wouldn't be quite the same without them. Regardless, don't let that title put you off - Some Guy Who Kills People is a fantastic little gem for all it's ostensibly a lo-fi genre production, and horror or not, comes strongly recommended.

So, there you have it. Title be damned, this is a good little movie that deserves more attention than I'm sure it will receive. Let it not be said that I didn't do my part, though. Please check it out!

Some Guy Who Kills People comes to the US on DVD from Anchor Bay, who are thankfully getting back into the business of genre film, even though they have signed over most of the catalog stuff to other distributors. If they keep kicking out DVDs of films like this, I can roll with the evolution. As I mentioned above, Some Guy looks like a low budget indie film, and on DVD it looks good, but unremarkable. Honestly, though, there isn't a whole lot of flashy stuff or fancy cinematography to show off in the film, so I don't feel slighted. The audio fares about the same, though that gets a bit more fun when some of the kill scenes come around. I have no complaints on the A/V front, I don't see how they could have improved outside of upgrading us to a Blu-ray.

Anchor Bay have loaded us up with some solid extras for this little gem. First we get an audio commentary from the writer and director, both of whom spend most of their time explaining the nitty gritty behind the scenes stuff. There is also a half hour making of featurette, which is nice and simple and gets straight to the point. Nothing award winning, but a bit deeper than your usual EPK. Finally, there is a short titled The Fifth, which is reportedly an influence on the film, though I see no connection apart from in being a film featuring a serial killer with comedy. Either way, it's actually pretty funny and worth a few minutes of your time.

Some Guy Who Kills People is a great film with a terrible title. Please, don't let it push you away!

Some Guy Who Kills People

Order Some Guy Who Kills People on DVD at Amazon