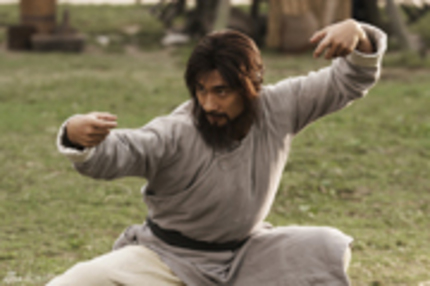 It's always hard picking through these things. But one thing that helps is when you guys read directions. The contest stated you needed to send me stories of bizarre glory NOT  real life heroes or people that you admired because they overcame great odds bleah bleah bleah. So with all due respect these are the only two entries that came close to doing that.
Congratulations KRAIG HORIGAN and DONIVAN ARNOLD your DVDs are on their way.
Your entries are posted below. The rest of you hang your heads in shame and read the directions next time. For cripes sakes Arnold posted the lyrics to the old Daniel Boone TV Show theme song and won.
"It was back in 1989 and we were hanging out front of Quikie Mart... probably good 12 or more long hair stoner kids screwing around on a weekday evening with nothing better to do but play street fighter, pinball and talk about beer runs.
When all of a sudden some dude runs out the front door like a crazy man and books it down the sidewalk. We all quickly realize that the store was robbed.
We'll this is our store, no one fucks with our store!
Next thing I know, people are sprinting after him, while the rest are diving into the back of trucks and doing the Duke's of Hazard move into their cars and yelling "Posse!"
The great chase began
The store is located near a creek in the middle of the suburbs... There is a long slope which is probably 20ft down from the parking lot of this plaza. This is where he tried to escape by going down into the creek and hoping to escape into the houses beyond. But, that didn't happen.
One man
One super man
Decided to fly that night
And a Legend was born
Dave who was the fastest of the posse in full sprint dove from the top of the slope...
Head first!
He tackled the thief at the bottom, slamming him into the creek as the rest of us arrived in shock and awe of the man who would be now known as Super Dave.
A hero.
We dragged the burglar out and back to the store till the cops arrived.
Unfortunately, the cops let him go. Maybe they thought he learned his lesson I guess. Don't mess with Quikie Mark or Super Dave will tackle your dumb ass in a creek- Kraig Horigan
2.

Daniel Boone was a man,
Yes, a big man!
With an eye like an eagle
And as tall as a mountain was he!

Daniel Boone was a man,
Yes, a big man!
He was brave, he was fearless
And as tough as a mighty oak tree!

From the coonskin cap on the top of ol' Dan
To the heel of his rawhide shoe;
The rippin'est, roarin'est, fightin'est man
The frontier ever knew!

Daniel Boone was a man,
Yes, a big man!
And he fought for America
To make all Americans free!

What a Boone! What a doer!
What a dream come-er-true-er was he!

Daniel Boone was a man!
Yes, a big man!
With a whoop and a holler
he c'd mow down a forest of trees!

Daniel Boone was a man!
Yes, a big man!
If he frowned at a river
In July all the water would freeze!

But a peaceable, pioneer fella was Dan
When he smiled all the ice would thaw!
The singin'est, laughin'est, happiest man
The frontier ever saw!

Daniel Boone was a man!
Yes, a big man!
With a dream of a country that'd
Always forever be free!

What a Boone! What a do-er!
What a dream-come-er-true-er was he!