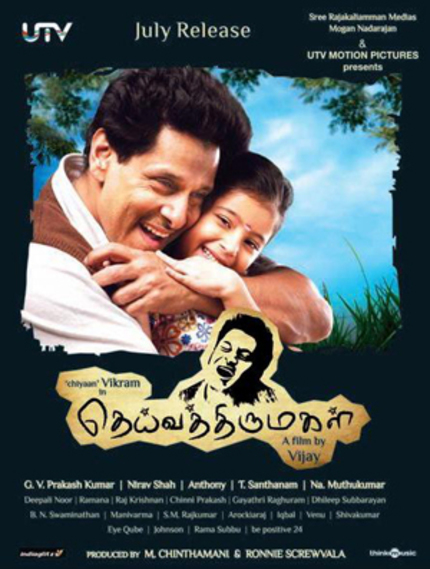 Okay, so we all laughed at the ridiculous trailer for Vijay's Deiva Thirumagal, and rightly so.  The Tamil unofficial remake (read: rip-off) of Sean Penn's disastrous I Am Sam not only featured what looked to be astoundingly insensitive portrayal of a man with autism or some other developmental disability, but also featured giant fucking snakes, dinosaurs, a battle sequences straight out of Lord of the Rings, and hand puppets.  If that isn't fodder for mockery, what is?

Well, if you read the Indian media reviews, which I do, you'd be surprised to hear that Deiva Thirumagal is setting Chennai movie houses on fire.  Audiences are leaving the theatre in tears, the good kind, at the overwhelming emotional sentiments in the film. Frankly, I would like to say that I'm flabbergasted, but really, I should have seen this coming.  In my report on the trailer, I mentioned the preposterousness of Karan Johar's My Name is Khan, which elicited a similar response from audiences, as well as eliciting millions of rupees from their pockets.  Perhaps Deiva Thirumagal is better than we know, here are a handful of quotes from the Indian press today:

Gone are those days of hero bashing goons. Films have become a medium to narrate stories from daily lives with a difference. Deivva Thirumagal is one such film that is engrossing and entertaining. All credit goes to director Vijay and actor Vikram. They both team up to rencder a film that is awesum from the first frame. Deiva thirumagal is whif of fresh air amidst commercialk cliches. It instils confidence among people that Kollywood is capable of coming up with innovative films. On the whole, Deiva Thirumagal doesn't disappoint but for a some slow-paced script at places.

With engrossing performance by Vikram, backed by strong technical team, the movie is sure to impress you.

Call 'Deiva Thirumagal' an honest attempt once again by director A L Vijay. And, perhaps the need of the hour too. It's far from the madding crowd of commercial masala films. With no double meaning dialogues or flashy song sequences shot abroad or 'high-voltage' stunt scenes, the film is an emotional journey between a father and daughter and their love towards each other.

The USP (editor's note: universal selling point, the Indian film jargon for "hook") of the movie is immaculate performance by Chiyaan Vikram. He plays a dotting father to a five-year-old daughter. But he is not the usual dad - he is an adult with the mental maturity of a five-year-old. The actor in Vikram seems to have taken it in his stride to deliver a power-packed performance.

Director Vijay's caliber as an effective raconteur keeps escalating in every film of his and DT is the latest example. His matured handling of the script and his characters are just testimony to this. It is endearing to watch this tale unravel itself in a very charming and touching fashion...

After a long while, DT gives the satisfaction of watching a film without cringing in your seats or worrying how it would appeal to the young population. In short Deiva Thirumagal is a well nuanced film that will appeal to everyone who has their heart and feelings in the right place.

So, now I want to see this.

These reviews do very little to change my initial impression that the film will be a trainwreck, but I remain fascinated by Indian films and the culture that produces and enjoys them.  If you go back and read the full reviews, they are stuffed with hyperbole and hero worship, which is something that is sorely missing from film criticism in the West.  I don't mean that all films should be star vehicles, but couldn't some? Furthermore, is that so wrong?

Hero worship and the conflation of Indian film actors with gods is nothing new, nor is it anything that Indians and south Asians apologize for.  The majority of Indian hit films in any of their many language groups star one major actor, with several lesser actors in supporting roles, India doesn't do ensemble casting very often.  As such these lead actors carry a huge burden to make a film a success, and in the service of that, their characters must become larger than life. It isn't enough for an Indian hero to win a fight, he must win the fight with one hand in his pocket (Simha), or while too drunk to function (Don Seenu), or in such an astonishing fashion that he punches people through cars (Chandramukhi), or, in the case of Ajay Devgn's upcoming  Singham, he must shoot a car so hard that is explodes into the air.

For much of the south Asian subcontinent, blockbuster films are escapist entertainment.  They make great independent films, as the world is beginning to see, but the stuff that gets asses in seats is melodrama and absurd action. In this regard, Devia Thirumagal is somewhat different.  The reviews revel in hero worship, most of them harping on Vikram's performance as the hero, Krishna, with relatively little to say about the actual film.  Several reviews, including one quoted above, mention specifically the fact that Krishna doesn't vanquish goons in the film, but rather he conquers hearts.

Now I'm wondering if this film could possibly be as good as the critics are saying.  Will my western sensibilities prevent me from becoming emotionally engaged in a film that I have already condemned to mockery?  I'd like to think that I'm more open minded than that, but who knows.  I've become very adept at moderating my expectations when going into films in general and Indian films in particular.  By moderating I don't mean lowering my expectations, but shifting them onto a different plane.  What you get from a film is largely dependent upon what you bring into it, so if you go in as a snob and expect certain beats and realism, but when a film delivers a different type of feeling, that doesn't mean that it is bad.  I think we here at ScreenAnarchy are mostly very good at approaching films on their own terms, even when they look unintentionally ridiculous.  As such, I'm going to try to find Deiva Thirumagal and give it a fair shake, I'll let you know how that pans out...