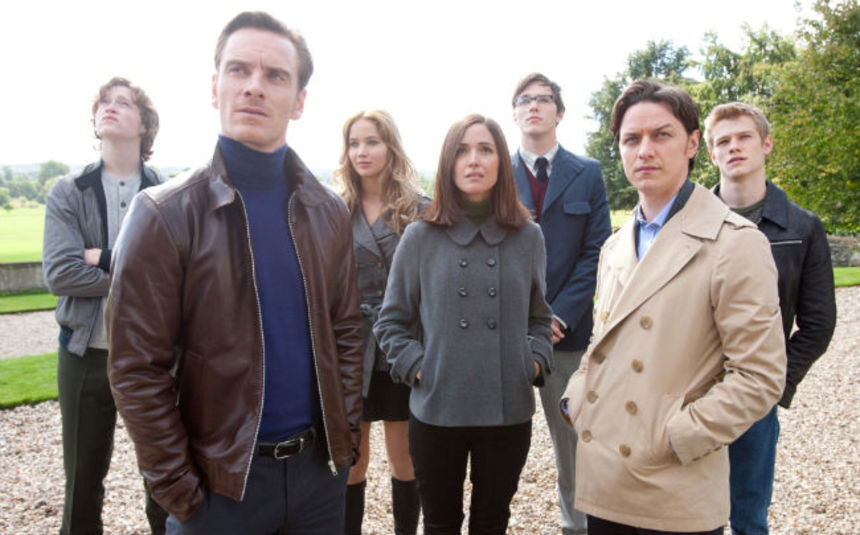 X-Men: First Class is a total pleasure, hitting all the action beats we've come to expect from big-budget studio productions, and adding much that makes it unique, at least among the sorry crop of sequels and prequels and mutated origin stories that have flooded the worldwide market in the past decade.

That's not a left-handed compliment; the movie is not just "good for what it is" or "not as bad as feared" or "decent for the superhero sub-genre." On the other hand, I don't want to oversell it. X-Men: First Class is not at the top rank, up in the rarefied air of Christopher Nolan's The Dark Knight or the next half-step down with Sam Raimi's Spider-Man 2. Its ambition is not as broad as those films, and the emotions don't run as deep.

But, boy, I had a blast watching X-Men: First Class, knowing I was in the hands of talented, creative people who were clearly intent on delivering as much entertainment value as possible, without neglecting to develop a crowd of (probably too many) characters.

The movie begins by recreating a scene from the first X-Men, which is either daringly brave or incredibly stupid. It proves to be the former: it leads to as much of a brief "origin story" as we initially need for Erik Lehnsherr (played by Michael Fassbender as an adult), supplying him with sufficient motivation for his actions (and demonstration of his powers) in the scenes that follow, as the movie quickly flash-forwards to 1962, where the story cuts between three threads.

The first thread sticks with Erik, now on a personal quest for vengeance. The second observes the comfortable, affectionate, sibling-like relationship between mutants Charles Xavier (James McAvoy) and his good friend Raven (Jennifer Lawrence), as Charles is completing his education at Oxford. The third kicks off in Las Vegas, as the CIA's Moira MacTaggert (Rose Byrne) strips down to her lingerie to follow a suspect into the infamous Hellfire Club, where Sebastian Shaw (Kevin Bacon) holds court, with the regal-looking Emma Frost (January Jones) on hand as his #2, and henchmen Azazel (Jason Flemyng) and Riptide (Álex González) obeying his every command.

The three threads converge in a massive battle sequence that rips and snorts with visual effects that dazzle the eye without destroying the character-based foundation that's been laid. The movie rises above average with the action sequences, choreographed in such a way that it's easy to follow what's happening and to whom, but it's the sharply-defined heroes who continually push the film forward and mark it as a success.

Granted, the sheer number of characters showing up on screen threatens to overwhelm the viewer, especially when yet another handful of mutants, the titular "first class" (played by Zoë Kravitz, Nicholas Hoult, Lucas Till, Calen Landry Jones, and Edi Gathegi) are introduced midway through the proceedings. Still, I never felt lost, as though navigating an overgrown jungle; the paths are clearly marked and the plot's general direction is never in doubt.

The "first class" of mutants are, by definition, still learning to control their powers, allowing for a greater amount of playful humor to emerge as they test out their abilities. Charles is their teacher, seeking to impart his compassionate, resolutely optimistic view of mankind. Erik is the doubter, still haunted by the horrors of his youth, and leaning sharply toward a pessimistic outlook, though he considers himself to be a realist. Charles and Erik become friends, even as their personal philosophies increasingly begin to diverge.

The students, too, start to lean one way or another, depending on their own experiences. During its initial run in comic book form (the first issue appeared in September 1963), the X-Men series eventually, some would say inevitably, explored themes of racism and prejudice, themes that have reappeared in the movie series. This may be the first time, however, that one of the X-Men movies has suggested so strongly that the mutants have a right to decide which side of the issue they want to support.

The philosophical differences between Charles and Erik have an effect upon Raven (AKA Mystique), as does her growing attraction to super-intelligent scientist / fellow mutant Hank McCoy (Nicholas Hoult). Hank is hard at work on a serum that will allow the mutants to pass as "normal," at least as far as outward appearance is concerned, but is that a good thing? Or is it better to come out (of hiding), to be "mutant and proud"?

The early 60s settings are filmed without calling undue attention to the exquisite detail (music, costumes, production design). The performances are spot-on; the supporting roles, even tiny little bit parts, are filled with faces who will be familiar to genre fans. There are also numerous callbacks to the earlier films.

Purists can debate the merits of including X-Men from different eras -- a hallmark of Singer's two installments -- but, in the end, what matters is the story and the way it's told. As a big fan of director Matthew Vaughn's Kick-Ass, I'm delighted to see him to take an established franchise and rejuvenate it with great skill and care. Six people received writing credits -- who knows how many actually took a whack at it through the years of development -- and, somehow, it ended up as a good blueprint for Vaughn (one of the credited writers, along with his Kick-Ass partner Jane Goldman). John Mathieson's cinematography also deserves special mention; he captures a great range of primary colors that pulse with life.

X-Men: First Class is a vastly entertaining film that stands on its own as a super-powered tale of good vs. evil.