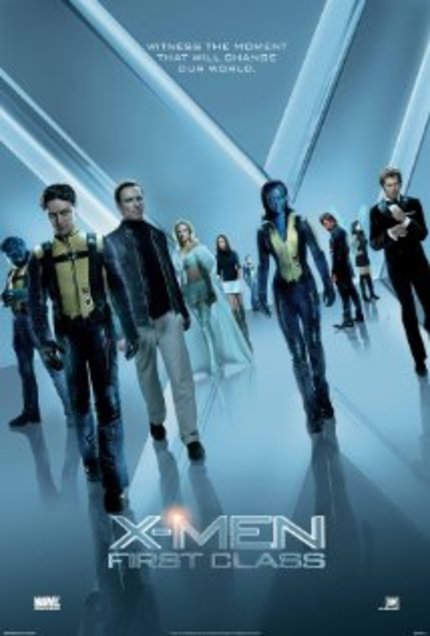 A good dozen, maybe more, amply endowed young ladies clad in only their lacy underthings strut into a high class club, each one soon vanishing into a private booth, accompanying at least one wealthy male party attendee as "Palisades Park" pounds out over the archaic sound system. Among this crowd of most-welcomed "entertainment" lurks a ringer. A spy. A female covert operative doing what female covert operatives do in movies - use their sexiness to achieve their mission goals. This is one Moira MacTaggert, a legacy character in the "X-Men" comic book mythos, and in this film, someone who gives no thought to stripping down in order to infiltrate and blend in. It's just that kind of decade. Straaaaange things are afoot, and they must be investigated.

Meanwhile at the Pentagon, MacTaggert's higher-ups sit in a darkened room, gathered around a circular table with a matching overhead circular lighting rig. That's right, they are on Ken Adam's "Dr. Strangelove" war room set - a clear bit of cinematic reference to a time and place that never quite was - just as Ms. MacTaggert is working her way through some sort of swinging '60s movie soirée that would send the "Austin Powers" films drooling. Welcome to Matthew Vaughn's 1962.

Yes, this is the latest "X-Men" movie, although with little in the way of overall tone or talent carrying over from the previous films, one may be slow to recognize it as such. For lack of a better way of saying it, this is clearly the most "red blooded male" take on this material since they started making ""X-Men" movies more than ten years ago. This is not bad thing, nor necessarily a positive thing, either. It's merely an observation - although one that by now has very well possibly led you to decide just how badly you want to see this movie. One thing's for sure: with sometimes shocking amounts of brutality and sexiness, the bounds of PG-13 are most certainly being pushed.

All things considered, "X-Men: First Class" is actually a terrific recovery from the blunt awfulness of 2009's "X-Men Origins: Wolverine". This, despite the fact that for many, "X-Men" is virtually synonymous with the character Wolverine, who is all but completely absent from this film. But for those who know their Marvel mutant lore, they know that in the forty-five-plus years of "X-Men" comic books (and all the complex continuity, scores of characters, and interweaving plot threads which they've become to be known for,) the heart of it all lies within the ideology and dream of Professor Xavier, not a certain sawed-off clawed Canadian berserker.

Standing in direct conflict with Xavier's goal of a peaceful co-existence between ordinary humankind and the genetically super-powered faction of the populace known as mutantkind is Erik Lensherr, aka Magneto, the powerful master of magnetism. The Xavier/Magneto conflict, and their long, complex history, has been successfully established in previous "X-Men" films, but "First Class" finally ceases the heretofore-unutilized opportunity to detail their righteous beginnings at feature length. It is a character-driven global epic action film that is populated by scores of super powered heroes and villains, many of whom we are actually made to truly care about. And that's a major success for "X-Men: First Class".

In the film, MacTaggert (Rose Byrne) seeks out young Charles Xavier (James McAvoy), whom at this point in his life is an able-bodied, quickly rising expert in the field of mutant expertise, and sporting a full head of hair, as opposed to the bald and wizened wheelchair-bound version of the character played by Patrick Stewart in the previous films. Xavier, along with an emerging group of mutants (including younger, more fleshed out versions of several characters from previous films, such as Hank McCoy/Beast [Nicholas Hoult] and Raven/Mystique [Jennifer Lawrence]) must band together to save mankind from the evil Sebastian Shaw (Kevin Bacon), a cold blooded former Nazi, and the single most despicable "X-Men" movie villain to date. (And to be fair about the whole scantily clad underwear thing I began this review with, that aspect is no more gratuitous here than it is in the comics, wherein Shaw's Hellfire Club is synonymous with kinky, skimpy female attire.)

In step with "X-Men Origins" before it, "X-Men: First Class" takes place, to some degree, in the real-world past, ultimately offering up a super-hero centric version of the Cuban Missile Crisis the way the former film handled the Three Mile Island reactor disaster (but much more effectively). In so doing, those in need of a cohesive "X-Men" movie timeline will be even more hopelessly lost in irreconcilable continuity than ever before (the plausibility of the character's aging from the young people they are in this early-1960s based prequel to the seasoned adversaries we know from Bryan Singer's 2000 original film is all the more strained by that film's pointless time placement in "the near future").

Like the first "X-Men" film, this one opens with a flashback of young Erik in a Nazi concentration camp, his family members victims of the atrocities. Back in 2000, I was surprised the film actually went through with this, as I figured that using one of the single greatest acts of real-world human-on-human terror in recent history as the impetus for a super-villain origin may be perceived as somehow being in bad taste. The outcry never came, and this time, the concentration camp is expanded upon to show the horrors of Erik Lensherr's young life after he magnetically mangled that gate into the shape of a deformed X.

As odd and perhaps amusing as this collision of real world tension and the comic book fantastic may seem to some, it is actually a major part of what makes the Marvel Universe unique - it's very much our world, but heightened. (In that sense, Vaughn's many nods to the cinematic 1960, detailed in my opening paragraphs, do not collide with this edict, and in fact should be viewed purely as what they are: fun.) And although "sensitivity" may not be the first word that comes to mind when describing the work of director Matthew Vaughn ("Kick-Ass", "Layer Cake"), these concentration camp sequences are never in bad taste in "X-Men: First Class".

It all amounts to the compelling yet roundabout tale of how Magneto (surely one of the all-time great comic book villains, if not all-around characters, here played with slow-burn intensity by Michael Fassbender) and Xavier met, bonded, then parted ways as enemies. We witness the birth of the X-Men, and see how Lensherr's time with the Nazis made him the complex character of Magneto. There's plenty of audience-engaging action; the characters, for the most part, are also engaging, and the movie is never boring.

But somehow, despite all of that, it's still just not as easy to get excited about "X-Men: First Class". Maybe it's the fact the film, for all its many battling mutants, is lacking a single character with the dangerous pulse of Hugh Jackman's Wolverine. Or maybe it's the fact that, as great as James McAvoy is as young Xavier, it's still nonetheless difficult to accept the character as a womanizing party boy. (Let's face it, we spend the whole movie wondering when and if we'll see him lose his hair and end up in the wheelchair.) Or, maybe the consistent quality and care that is routinely put into top tier comic book films such as this one is just spoiling me. I have it in mind that this film doesn't quite measure up to 2003's "X2: X-Men United" - but I have to wonder if I'm perhaps remembering that film through rose-colored glasses. Ten years ago, when the pickins were that much slimmer in this booming sub-genre, we were perhaps that much easier to please. That's something that will have to be checked another time.

The point is, "X-Men: First Class" does an awful lot right, and, like the altruistic team it's about, it may be paying the price for it already. What this film lacks in Wolverine it makes up for in Erik-becoming-Magneto pathos, Mystique's identity angst, and Beast's onscreen transformation into Sully from "Monsters Inc." (Okay, maybe not that last one.) But "X-Men: First Class" is nonetheless an excellent new take on a derailed franchise, through the lens of alternate history. If you feel the need to sneak into it in your underwear, I understand, but do remember that as engrossing as this movie can be, the sixties ended years ago, and were never quite that swingin'.