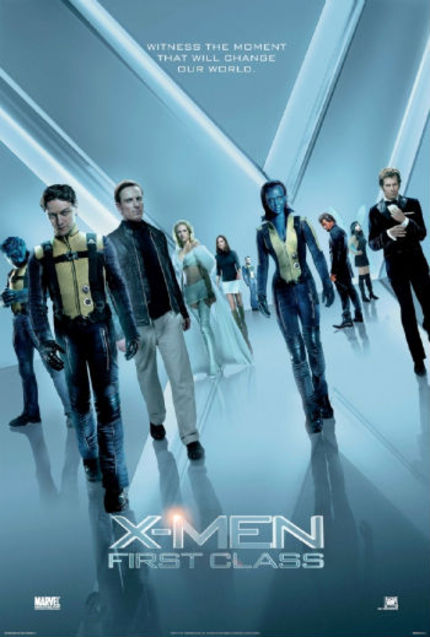 What a difference a director makes! Compare, for example, X-Men: First Class with X-Men: The Last Stand and X-Men Origins: Wolverine (with your eyes closed, if you wish), and the vast chasm of talent between Matthew Vaughn, Brett Ratner and Gavin Hood (smoosh the latter two together, if you wish) becomes readily apparent. All three were following in the footsteps of Bryan Singer, all three were dealing with temperamental stars, huge budgets, extensive special effects, and, in 20th Century Fox, a studio with a reputation for throwing massive roadblocks at directors. Yet it's only Vaughn who emerged with a winner.

Six years ago, Vaughn came on board to direct X-Men 3. As ScreenAnarchy's Todd Brown commented at the time: "It's an interesting choice, to say the least ... Vaughn's got nothing in his past to suggest he can handle special effects, but then neither did Bryan Singer when he did the first one." At that point, Vaughn had already produced six features, including three for Guy Ritchie (Lock, Stock & Two Smoking Barrels, Snatch, Swept Away), as well as his own directorial debut, Layer Cake, which he tackled only after Ritchie dropped out.

But Vaughn walked away from the project, telling the Daily Telegraph: "I didn't have the time to make the movie that I wanted to make. I had a vision for how it should be, and I wanted to make sure I was making a film as good as X-Men 2, and I knew there was no way it could be. I just suddenly knew it wasn't the right thing for me to do. It was a tough decision because it was a hell of an opportunity. But I was trying to make a career as a director, and I didn't want to be the guy accused of making a bad X-Men movie."

He made Stardust instead, filled with special effects (and inspiring divisive reactions here at Twitch; see the comments in response to Jim Tudor's review), which left the X-Men franchise open to Brett Ratner and his X-Men: The Last Stand, about which, the less said the better, though I can't resist quoting Vaughn's reaction: "As it happens, I could have made something a hundred times better than the film that was eventually made. ... It sounds arrogant, but I could have done something with far more emotion and heart. I'm probably going to be told off for saying that, but I genuinely believe it."

Still, Vaughn was penciled in at the time for the big-screen version of Thor -- see Blake's 2007 Sitges interview with him for ScreenAnarchy -- but we never got to see the realization of his concept of "THE MIGHTY THOR set in a gritty Viking world." More's the pity. Vaughn served as one of the producers on Harry Brown and then made Kick-Ass independently, allowing it to bleed profusely and curse freely.

Meanwhile, Fox handed Gavin Hood the keys to the franchise, with the responsibility to make the first "origins" film, focusing on Wolverine, the most popular character. On the sole basis of Tsotsi, which burned up the festival circuit in late 2005, I thought it was a bold choice. In my review, I praised Hood's "exquisite eye for widescreen compositions" and concluded: "He walks through a minefield and emerges without a misstep." Of course, I hadn't seen Rendition at that point, which seemed to be more than Hood could handle effectively, and X-Men Origins: Wolverine cemented the conclusion that Hood's abilities are not well-suited to the out-sized requirements of blockbuster entertainment, at least at this stage of his career.

Vaughn had risked his future prospects in Hollywood by leaving X-Men 3 just two months before production was scheduled to begin. He now admits that he "burned a bridge," realizing too late that he was "applying small-budget independent-style logic to the wrong equation," as he told EW.com. He got the opportunity to return when Singer wasn't available for the First Class start date set by Fox; in Vaughn's words: "They asked, so we met and we both kissed and made up and went off to make the film."

As with every picture, the faults of X-Men: The Last Stand and X-Men Origins: Wolverine are not those of the director alone, nor is Matthew Vaughn the sole reason that X-Man: First Class frequently soars above Bryan Singer's first two installments. It's a wonder of alchemy that Vaughn, John Mathieson (director of photography), Eddie Hamilton and Lee Smith (film editors), Henry Jackman (original music score), Chris Seagers (production design), and the rest of the crew and cast transformed otherwise ordinary elements -- and potentially disastrous material -- into something special.

But having the right director at the helm sure makes a difference.